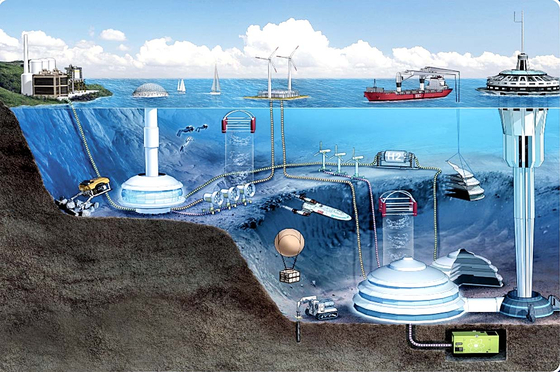 A test site for Korea’s first undersea city will be built in waters off Ulsan.

The metropolitan government of Ulsan, some 300 kilometers (186 miles) southeast of Seoul, and the Korea Institute of Ocean Science and Technology announced Wednesday that the sea area near Silli Port in Ulsan’s Ulju County has been chosen.

The project’s first goal will be to create a space 900 meters (2,953 feet) away from Silli Port and 30 meters below sea level where three people can live for 30 days.

The chosen area was deemed most appropriate among applications received, said the institute, based on how safely underwater structures could be placed.

“Cables have to be installed [around the test site zone] to send energy from the land,” said Han Taek-hee, a senior researcher at the Korea Institute of Ocean Science and Technology, which is behind the project.

“And then it’s important that the seafloor is safe enough for [the structures to be installed ], which is why the area was chosen.”

The project is overseen by the Korea Institute of Ocean Science and Technology and participated in by 22 companies and institutes in various industries including construction, space and telecommunications such as SK Telecom, Hyundai Construction Equipment, Lotte Engineering & Construction, the Korea Aerospace Research Institute and the National Korea Maritime & Ocean University.

A total of 37.3 billion won ($28.3 million won) worth of state funds will be funneled into the project, including 31 billion won over the next five years.

The Ulsan Metropolitan Government said it plans to inject more than 5.2 billion won to develop and install a marine observation system in the city to collect and analyze data for the undersea city plan.

Once the project successfully reaches its first goal, the next goal will be to create a space 200 meters below sea level where five to 30 people can live for 77 days, according to the institute.

Construction for the undersea test site will be led by robots.

Parts of the structures to be installed undersea will be built on land and put together by the robots under the sea.

The institute said it hopes the project paves the way for renewable energy storage and usage while offering fresh ideas and technology for data storage, shipbuilding plants and new materials.

“Creating and utilizing undersea space requires the whole package of state-of-the-art technology in marine science,” an official with the Ulsan Metropolitan Government said on Wednesday.

“Ulsan is determined not to spare any money on this project to boost the marine industry.”

Ulsan, which is the eighth most populous city in Korea, was chosen by the Ministry of Oceans and Fisheries as the host for the underwater test site project last April. In explaining why, the ministry said Ulsan waters were deemed most fit for the research due to their temperature and turbidity, the measure of the cloudiness of a liquid.

The fact that Ulsan’s seabed hadn’t subsided over the past 20 years was another critical point, the ministry said. The city’s industrial zone for shipbuilding and offshore plant technology was also a positive factor.