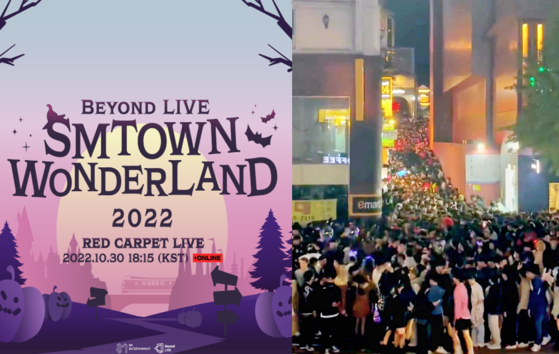 “SMTown Wonderland 2022” has been canceled on Sunday morning following a string of casualties from a large crush by a Halloween crowd at Itaewon in Yongsan District, central Seoul, on Saturday night. [SM ENTERTAINMENT, SCREEN CAPTURE]


SM Entertainment canceled its annual Halloween party that was scheduled for Sunday night.

“We have canceled ‘SMTown Wonderland 2022′ and, accordingly, the red carpet event that was to be livestreamed has been called off as well,” said SM through its fan community Kwangya Club on Sunday. “We ask for the the fans’ understanding.”

SM had announced earlier this week that it would hold a red carpet event that will be broadcast live through the online streaming platform Beyond LIVE from 6:15 p.m. on Oct. 30.

A string of actors and singers represented by the agency were set to appear in their Halloween costumes during the broadcast.

SM did not specify the reason for its cancellation; however, it is likely due to the Saturday night disaster during Halloween festivities in Itaewon in Yongsan District, central Seoul.

Prime Minister Han Duck-soo, in an emergency briefing held Sunday at noon said that “We will delay any events that are not urgent and declare Yongsan a special disaster area. We will provide the families of the deceased and those who have been injured with subsidies and other necessary measures. We will also work with embassies to make sure that the injured foreigners are properly supported.”

By Sunday morning, 151 deaths were confirmed by the National Fire Agency, which added that 19 of the 82 injured remain in critical condition, all resulting from a crush by a large Halloween crowd.