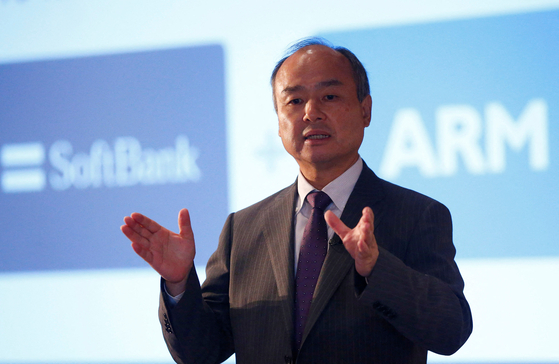 SoftBank Group CEO Masayoshi Son speaks at a conference in London in 2016. [REUTERS]


SoftBank Group CEO Masayoshi Son will visit Seoul next month to form a partnership with Samsung Electronics over its selling of British chip designer Arm.

“I’m looking forward to the trip,” Son was quoted as saying by Bloomberg. “I want to discuss a strategic alliance for Arm with Samsung.”

The form which the partnership will take remains unclear.

The chip design company, which is based in Cambridge, Britain, has been put up for sale by SoftBank and is now set to be listed after a $40 billion acquisition by Nvidia fell through due to regulatory concerns.

Samsung Electronics Vice Chairman Lee Jae-yong said on Wednesday that Son may bring up the issue of the Arm deal next month, without elaborating further.

The Japanese company intends to take Arm public, but the listing process has become the subject of considerable discussion. British authorities are pushing for a dual New York-London listing rather than just a single listing in the United States.

Naver to launch competitor to ChatGPT