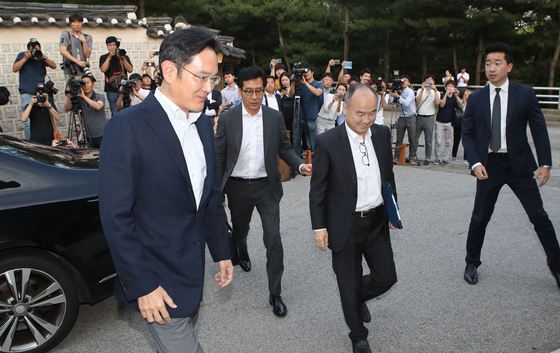 
SoftBank Group CEO Masayoshi Son did not bring up the subject of selling all or some of Arm to Samsung Electronics during a meeting with the Korean company Tuesday, according to a report in the JoongAng Ilbo.

Arm, the British company that almost monopolizes microprocessor technology for smartphones, is set to be sold by the Japanese company. Korean press has been speculating that SoftBank Group may try to unload the asset in a sale to Samsung Electronics despite a deal of that nature being almost impossible for antitrust reasons.

During the meeting, which took place at a Samsung Electronics office in Seocho District, southern Seoul, a comprehensive, long-term partnership between Samsung Electronics and Arm was discussed, according to the unnamed sources, and the possibility of equity participation did not come up.

Samsung Electronics declined to confirm specifics of the meeting.

Arm, which is based in Cambridge, Britain, and was purchased by SoftBank in 2016 for $32 billion, is set to be listed after a $40 billion acquisition by Nvidia fell through due to regulatory concerns.

The U.S. Fair Trade Commission objected to the transaction on the grounds that key chip technology would be in the hands of a single chipmaker.

SoftBank holds a 75 percent stake in Arm and its Vision Fund owns the remaining 25 percent.

Both SoftBank and its Vision Fund have been under pressure lately as many of their investments have failed to perform. Tokyo-listed SoftBank Group is down more than 40 percent from its 52-week high, while the fund is laying off 30 percent of its staff, according to press reports.

Samsung Electronics is also under considerable pressure, due to chip overcapacity, high inventories and weak consumer demand. Its shares are down about 30 percent from 52-week highs. The company has been seeking a big acquisition, and an Arm deal would bring it key microprocessor technology it does not currently own.

Son arrived in Seoul on Oct. 1. He was quoted by Bloomberg as saying that the trip is being made to “discuss a strategic alliance for Arm with Samsung.”

It is his first overseas trip in three years.

Arm’s cores, which are processors essential for the making of microprocessors, can be found in Galaxy phones and other electronic gadgets, from the most advanced models to the most basic of appliances, and are utilized by Apple, Qualcomm and countless smaller electronic companies.

Arm owns technology that is used in 95 percent of phones and an increasing percentage of computers. It has traditionally licensed it in a neutral and transparent manner to all clients. This neutrality is seen as essential to the smooth operation of the telecommunications device market.