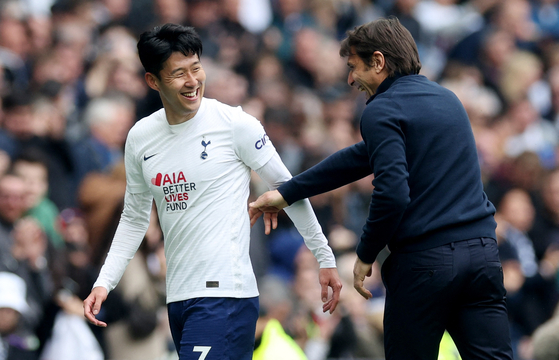 “If we don’t follow him then you know you struggle,” Son said. “We have to follow, there is no option because he’s a winner and I think this is what we do — sacrifice and do the hard things.”

Conte has faced some criticism after Spurs dropped the all-important North London derby to Arsenal 3-1 on Saturday, and then played to a frustrating 0-0 draw against Frankfurt on Tuesday.

Conte chose to field the exact same team in both games, presumably hoping that they might be able to redeem themselves in Germany, but with little success.

Son played the full 90 minutes, as did long-time playmaking partner Harry Kane. Neither were able to make much of an impact in front of goal, although both Kane and Richarlison, who played 79 minutes, missed some good opportunities.

Following the game, some analysts questioned Conte’s decision to use an unchanged lineup.

But Son doesn’t share the doubts, calling on fans and critics to trust the process and pointing out what Conte has already achieved with the club.

“We’re human, we’re all emotional,” Son said. “Sometimes after the game we’re all happy and sometimes we’re all angry or frustrated. That’s frustrated.

“The gaffer is more passionate, if we win he’s like the happiest guy in the world, but if the performance is not good and he’s not happy, he’s the first one blaming himself and wanting to improve.”

Spurs have been struggling to score on the road over the last few games, despite some explosive performances at home in the opening fixtures of the season. Son, who struggled with his own goal drought before hammering in three against Leicester last month, said it’s a frustrating situation but things will get better.

“I can’t really describe this feeling,” Son said. “To be honest I think we should have scored two or three goals [against Frankfurt] because we had good chances for Harry [Kane] and me. This is really frustrating because we know we just need half-chances but it doesn’t go, and this has happened in a few away games.

“It’s not what I want, but it’s always tough in the Champions League and there’s never easy chances to score. We are human and there’s still improvement. Obviously this moment it’s really frustrating but we have to move on to better things.”

On his own struggles earlier in the season, Son remained true to character, pointing out that he’s never happy with his performance anyway.

Returning to the Premier League this weekend, Spurs will take on Brighton on the road. While in previous years the south coast side might have seemed like a bit of a soft target, Brighton currently sit in fourth place as of press time, just three points behind Spurs.

[VIDEO] Brazil’s coach, Tite meets fan who helped his grandson and gives him a gift

Eyes on the prize