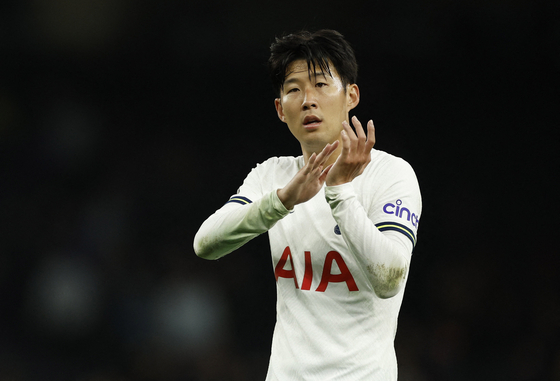 Real Madrid striker Karim Benzema won the men’s award in Paris on Monday, with Barcelona midfielder Alexia Putellas retaining her title in the women’s category for a second year.

Kane, the only other Tottenham player nominated, finished in 21st place, one spot behind Manchester United’s Ronaldo.


Son is one of only three Koreans to have made it onto the nominations list, alongside Seol Ki-hyeon in 2002 and Park Ji-sung in 2005.

Son was also nominated in 2019, when he received two votes to finish in 22nd place, the highest ever achieved by an Asian footballer and a record he has outperformed by a significant distance this year.

One notable exclusion from this year’s awards is Argentinian forward Lionel Messi, who has been a regular on the Ballon d’Or list since 2005. Neymar was also snubbed.

Son was the only Asian footballer shortlisted.

Starting this year, the Ballon d’Or was awarded based on players’ performance during the 2021-22 season, not during the calendar year.

Son’s 11th-place finish follows a dominant performance last season in which he won the Premier League’s Golden Boot with 23 goals.

He also picked up nine assists that season and combined with Kane to become the greatest goal-scoring partnership the Premier League has ever seen, breaking both the single season and all-time records.

Although Son has never come close to claiming the Ballon d’Or, he is a former winner of FIFA’s Puskas Award, given to the scorer of the best goal in the world, and the perennial winner of the Best Footballer in Asia award, known as Asia’s Ballon d’Or.

Son won the 2020 FIFA Puskas Award, an annual prize recognizing the “best goal scored during the period from 20 July 2019 to 7 October 2020 inclusive, regardless of championship, gender or nationality.”

He won the award for a 2019 goal against Burnley, in which he picked up the ball on the edge of the Spurs’ penalty area and ran the entire length of the field on his own, weaving his way through the Burnley defense before hammering it home. Spurs went on to win the game 5-0.


Son has won the Best Footballer in Asia award, presented by Titan Sports, for five consecutive years. Overall, he has won the award seven times and finished in third place, once, missing out on the top three only once in the award’s nine year history.