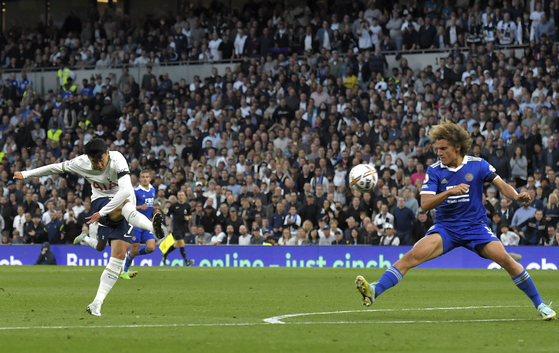 
Tottenham Hotspur forward Son Heung-min has made it onto the Premier League Goal of the Month shortlist for September with two separate nominations, despite only scoring three times so far this season.

All three of Son’s goals came during a home match against Leicester City last week, when the Korean midfielder snapped a six-game Premier League goal drought to hammer in a 13-minute hat-trick in the 6-1 win.


The Korean striker struck first in the 73rd minute, when he picked up a pass from Bentancur just past the halfway. Holding two defenders off, Son raced down the pitch to the edge of the D where he sent a long curling effort past both defenders and Ward and into the top-right corner.

That goal made it onto the Goal of the Month shortlist, as did a similar effort 11 minutes later, when Son picked up a pass from Harry Kane on the edge of the box, took a touch to collect himself and then sent a curling left-footed effort past six defenders and into the back of the net.

Son is not the only player with two goals on this month’s shortlist, with Brentford’s Ivan Toney also getting the nod for two goals scored in a game against Leeds on Sept. 3.

Son has won Goal of the Month twice before, in November 2018 and December 2019. The December 2019 effort also won him Goal of the Season and the FIFA Puskas Award for the best goal in the world.

[VIDEO] Pulisic to go up against Premier League stars