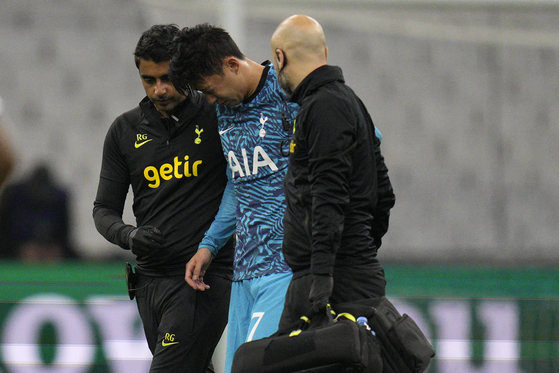 Tottenham’s Son Heung-min leaves the field injured during a Champions League Group D match against Marseille at the Stade Velodrome in Marseille, France on Tuesday. [AP/YONHAP]


Son Heung-min will have to undergo surgery to stabilize a fracture around his left eye, Tottenham Hotspur announced in a statement Wednesday.

After undergoing surgery, Son will begin rehabilitation. The club did not provide any further information about the injury.

Son was taken off in the 29th minute at Stade Vélodrome in Marseille, France, on Tuesday after Chancel Mbemba’s shoulder connected with his face near the halfway line.

Son’s face appeared to be heavily swollen and he was helped off the pitch by medical staff. An image posted on Instagram by teammate Pierre-Emile Hojbjerg after the game showed Son celebrating the win with the team, but he appears to be struggling to open his left eye.

Dr. Song Jun-seop, director of Gangnam JS Hospital and a doctor for the Korean national football team, told the JoongAng Ilbo on Wednesday that an orbital fracture was the worst-case scenario.

“The worst case is an orbital fracture,” Dr. Song said. “That will require more than eight weeks of treatment due to a fracture in the bone that protects the eyes.” 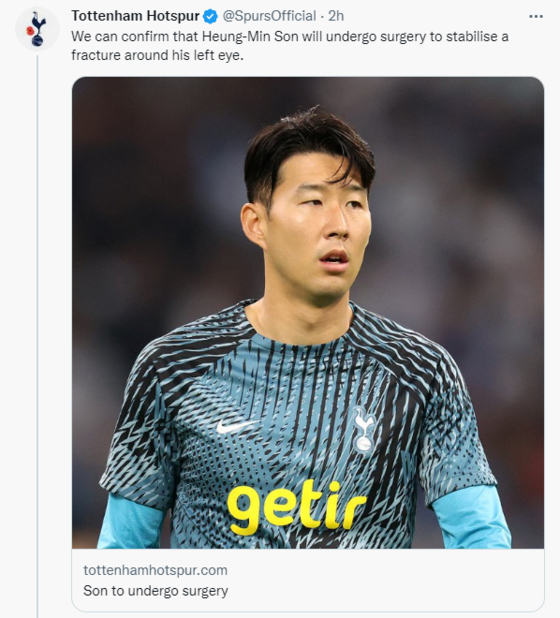 Tottenham Hotspur confirm that Son Heung-min will have to undergo surgery on an orbital fracture in a Tweet posted to the club’s official account on Wednesday. [SCREEN CAPTURE]


The injury comes just three weeks before the start of the 2022 Qatar World Cup where Son was expected to captain the Korean national football team. Surgery does not immediately preclude him from national duty, according to some experts, but whether he is able to play, perhaps wearing a mask, will depend on the extent of the surgery and his recovery.

The Korea Football Association is expected to hold off on making any announcement about the Qatar World Cup squad until after Son has started rehabilitation.

For Korean national team head coach Paulo Bento the injury could create a very perilous situation. Son is the most-capped active player in the Korean team, with over 100 national team appearances, and the top active goalscorer, with 35.

There have been examples of players coming back from an orbital fracture injury very quickly. Last year, Manchester City star Kevin De Bruyne fractured his eye sockets less than three weeks before the 2020 Euros, but was still able to join the Belgian squad later in the tournament.

The World Cup kicks off on Nov. 20, with Korea set to play their first game against Uruguay on Nov. 24. That leaves Son just under three weeks for surgery and rehabilitation.

[VIDEO] Brazil’s coach, Tite meets fan who helped his grandson and gives him a gift

Eyes on the prize