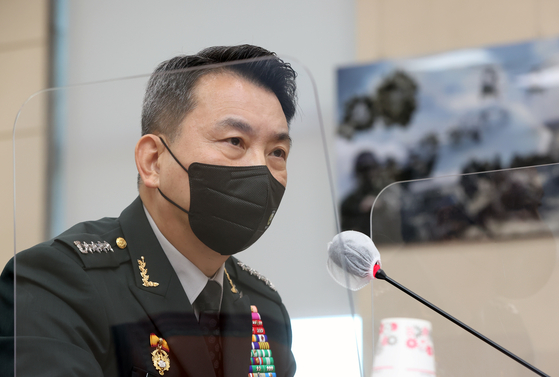 Joint Chiefs of Staff (JCS) Chairman Gen. Kim Seung-kyum speaks during a parliamentary session at the National Assembly in Seoul on Monday. [YONHAP]


South Korea’s top military officer warned Monday that any attempt by North Korea to use nuclear arms would leave it with “no scenario for regime survival,” in a response to Pyongyang’s recent codification of an assertive nuclear policy.

Joint Chiefs of Staff (JCS) Chairman Gen. Kim Seung-kyum issued the warning as Pyongyang unveiled its nuclear policy earlier this month, which leaves open the possibility of a pre-emptive strike in the event of a regime security threat.

“I will make North Korea clearly realize that should it attempt to use nuclear arms, it would face the overwhelming response from the South Korea-U.S. alliance and our military, and there would be no scenario for regime survival anymore,” he said during a parliamentary session.

To that end, Kim vowed to reinforce the military’s capabilities and posture to cope with the North’s nuclear and missile threats, which he said are seriously endangering security on the Korean Peninsula and in the region.

His stern message mirrored that of the Defense Ministry, which warned Pyongyang’s attempt to use nuclear options would put it on a “path of self-destruction.”

Seoul and Washington have recently ramped up their rhetoric to deter North Korean provocations.

Following their key high-level deterrence meeting in Washington, D.C., last week, the allies warned that the North would face an “overwhelming and decisive” response in the event of a nuclear attack.

At the parliamentary session, Kim also noted that South Korea is looking into the possibility of locally developing aircraft carrier-based aircraft as the Navy has been hoping to secure a lightweight carrier by the early 2030s.

Asked if the government is considering the development of carrier-based planes with its homegrown KF-21 fighter in mind, the JCS chairman said, “Yes.”

But he pointed out that the KF-21 has “limits” in terms of vertical take-off and landing — remarks that raised the prospect of the government weighing the idea of developing a bigger-size aircraft carrier than a lightweight one.