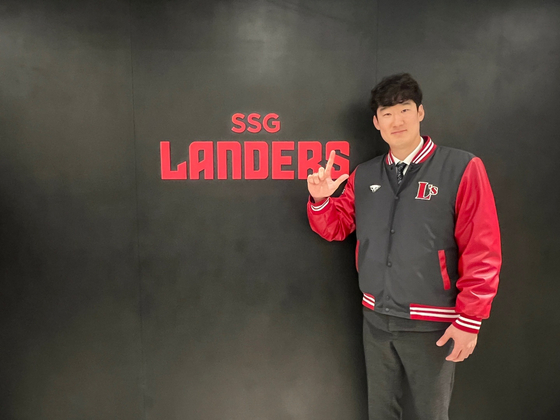 Oh Tae-gon poses in an SSG Landers jacket in a photo released by the club on Thursday. [SSG LANDERS]

Oh will earn a billion won in annual salary spread over the four years with a 600-million-won signing bonus and 200 million won in incentives.

Oh debuted with the Lotte Giants with a single appearance in the 2011 season, working his way back into the lineup in 2014 and breaking into a starting spot in 2015. He moved to the KT Wiz in 2017, playing three seasons in Suwon, Gyeonggi before moving to the SK Wyverns, now the SSG Landers, in 2020.

Over 10 seasons in the KBO, Oh has a career .262 batting average with 602 hits, 264 RBIs and 57 home runs. A consummate utility man, Oh is able to slot into both the infield and the outfield when needed, making him an especially versatile pinch hitter for the Landers.

Although he only posted a .232 batting average with 61 hits, 23 RBIs and four home runs off 295 plate appearances for the 2022 season, Oh came alive in the playoffs, picking up 10 hits for a .300 batting average and catching the series-ending out at first base in the Game 6.

Oh’s versatility reportedly gained interest from other club, but the Landers worked fast to keep him in Incheon.

“I was always proud of being part of SSG and I always felt that I wanted to remain here,” Oh said through the club. “I would like to thank everyone who believed in me.”

[Column] The psychology of illusions

[Column] Weathering the storm in 2023 and beyond