Subway murder suspect admits he had a grudge: police

Subway murder suspect admits he had a grudge: police 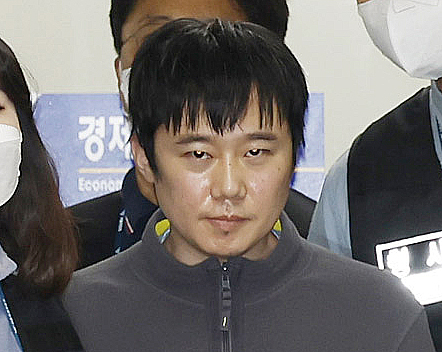 
The suspect in a stalking murder case at a Seoul subway station admitted he committed the crime out of “resentment against the victim,” police said Wednesday.

The Seoul Jungbu Police Station said Wednesday they found evidence that the 31-year-old Jeon Ju-hwan planned the crime a month before.

Jeon, a Seoul Metro employee, was apprehended after a female colleague was fatally stabbed in the ladies’ toilet in Sindang Station on Line No. 2 on Sept. 14, one day before a verdict was expected in his trial for stalking the victim.

The police found that Jeon accessed the intranet for Seoul Metro four times — on Aug. 18, Sept. 3, and twice on Sept. 14 — trying to look for the victim’s address. On those dates, Jeon had already been indicted on charges of illegal filming and stalking the victim and was suspended from his duties at Seoul Metro.

But the address wasn’t updated and showed the victim’s old address.

Jeon visited the old address five times — on Sept. 5, 9, 13 and twice on Sept. 14 — to find the victim, but failed, and eventually chose to visit her workplace, according to the police.

“It seems that he had complicated feelings about the victim, […] but made a final decision on the day of the crime,” a police official said.

“On Sept. 14, the day before his trial judgement, he wandered around the victim’s old home for about two hours, but as he failed to find her, he seems to have gone to the subway station,” the official said.

The police think the alleged murder was premeditated because Jeon prepared a knife, hair cap and gloves in advance and waiting for the victim in front of the ladies’ room for over an hour; he checked the victim’s workplace and duty hours in advance; and installed an application that could fake his GPS location on his phone.

Based on Jeon’s statement and CCTV footage, police also believe Jeon had the intention to escape after committing the crime.

“I have done a truly crazy thing,” Jeon said in front of reporters at Seoul Namdaemun Police Station before police transferred him to the Seoul Central District Prosecutors Office on Wednesday morning.

The Seoul Central District Prosecutors’ Office set up a dedicated investigation team for the case.

Police disclosed the name, photo and birthdate of Jeon on Sept 19 In accordance with the Special Act on the Punishment of Specific Violent Crimes. Under it, personal information of criminals can be disclosed if the crime’s cruelty, gravity, and the people’s right to know are satisfied. Ordinarily, suspects’ names, and ages are not disclosed and photos are not made public.