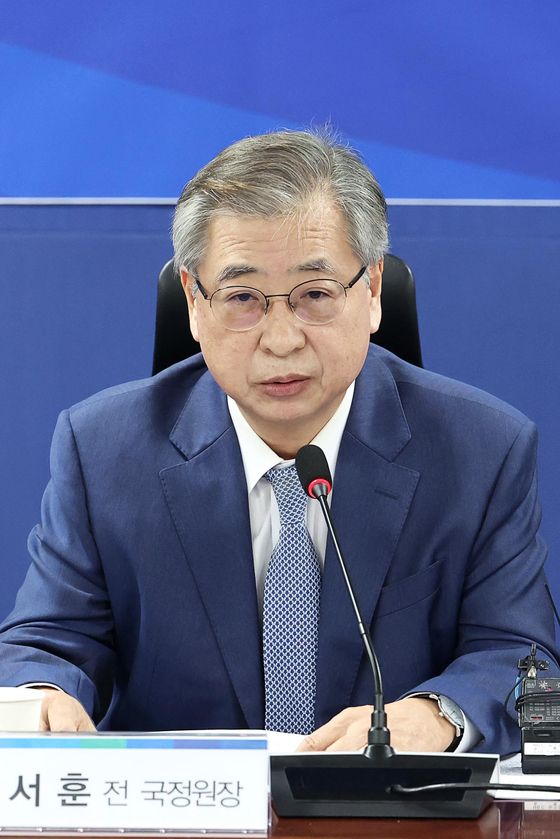 Former President Moon Jae-in’s national security adviser was summoned for questioning Thursday about allegations that he ordered the deletion of evidence in the murder of a South Korean fisheries official by North Korean soldiers in 2020.

Suh Hoon, director of the National Security Office in Moon’s Blue House, appeared at the Seoul Central District Prosecutors’ Office Thursday morning to address suspicions that he ordered officials to delete numerous documents about the murder so the administration could obscure crucial details – and claim that the official defected to North Korea.

On Sept. 22, 2020, North Korean soldiers fatally shot and burned the dead body of 47-year-old Lee Dae-jun, who had disappeared while on duty south of Yeonpyeong Island near the Northern Limit Line, the de-facto inter-Korean maritime border, in the Yellow Sea the previous day.

At the time, South Korean military officials said the soldiers burned Lee’s body out of fear of Covid-19 and that Lee tried to escape the South due to a hefty gambling debt.

That account changed last June, after liberal Moon was replaced by conservative President Yoon Suk-yeol. The Ministry of National Defense and the Coast Guard admitted in a press conference that there was actually no evidence to support the idea that Lee tried to defect.

After two months of investigation, the Board of Audit and Inspection (BAI) announced on Oct. 13 that Suh ordered government agencies to assert that Lee attempted to defect to the North despite insufficient evidence. The BAI asked the prosecution to investigate 20 people, including top security officials in the Moon administration, on allegations of covering up and distorting facts related to Lee’s death.

Prosecutors investigating the murder case believe that the alleged orders to delete documents and falsely claim that Lee tried to flee the South were handed down by Suh to avoid upsetting inter-Korean relations.

Suh has consistently denied the allegations, saying he never ordered anyone to delete any data.

The former national security director accused the Yoon administration of “recklessly taking revenge” on its predecessor, saying the suspicions were groundless.

According to the BAI, Suh convened an urgent meeting with relevant ministers at around 1 a.m. on Sept. 23, 2020, a day after the murder. Immediately after the meeting, the Defense Ministry deleted 60 pieces of intelligence and confidential military information related to the murder, while the National Intelligence Service erased 46 intelligence reports.

Prosecutors said they have testimony from unidentified sources who quoted Suh as urging everyone in the Sept. 23 meeting to keep their mouths shut.

Suh was also said to have blocked a Blue House secretary in charge of writing meeting minutes from attending the meeting, saying there was no need to document the discussion.

Suh was initially planned to be summoned for questioning on Wednesday, but prosecutors rearranged his appearance after the schedule was leaked to local media.

Suh’s aides in the Moon Blue House were summoned for questioning for three days from Nov. 16. On Tuesday, a high-level military official who was head of the so-called intelligence integration division at the Joint Chiefs of Staff when Lee was murdered was also called in for questioning.