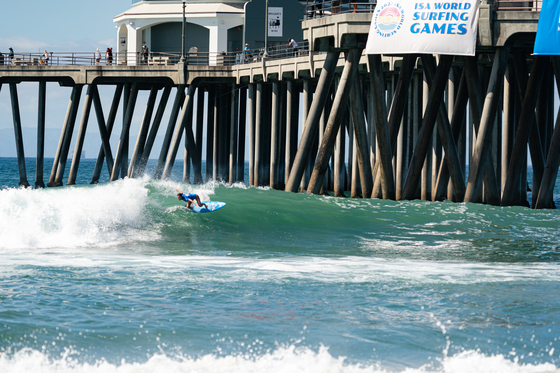 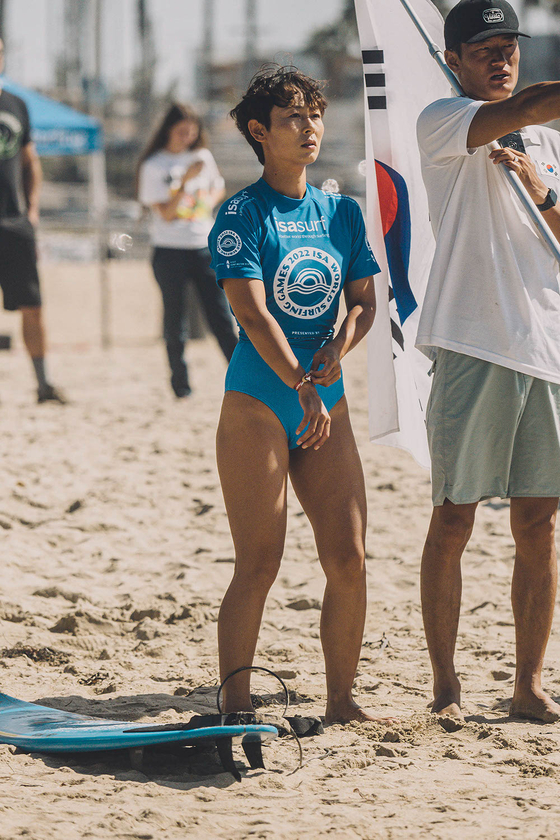 Surfing as a sport has enjoyed a boost in recent years with its arrival in the mainstream at the 2020 Tokyo Olympics and preparations underway for the 2024 Paris Olympics. For the athletes competing at the 2022 ISA World Surfing Games, this meant there were Olympic berths on the line.

Korea, still a relatively new contender in the world of competitive surfing, did not earn a ticket to the Olympics, but the team did record its best result yet. In Huntington Beach, Lee reached the third repechage round, the furthest any Korean surfer has ever progressed at the World Surfing Games, while Seol, Im Su-hyun and Hong all advanced to the second repechage round.

The tournament has been held every year since 2013 and kicks off with the Sands of the World opening ceremony, where surfers pour sand from a beach in their home countries into a clear container. This year, sand from 51 different countries were combined in the container.

Korea first started participating at the Games in 2017 in Biarritz, France.

Im Su-jung was part of that team that debuted at the Games in 2017, alongside her brother Im Su-hyun and Lee.

This year marks Im Su-jung’s third-ever World Surfing Games and her first in three years. The veteran surfer discussed her experience riding the waves and representing Korea at the World Games with the Korea JoongAng Daily in a written interview on Tuesday. 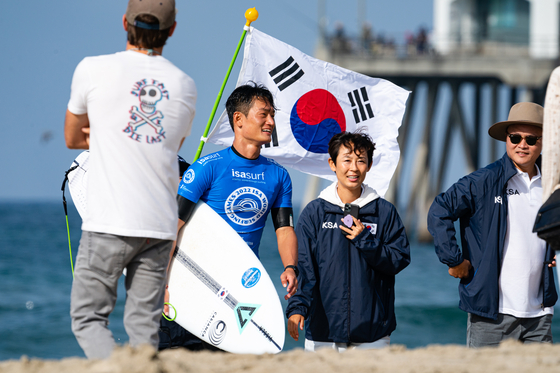 Q. How did Korea do at the World Games?

A. Korea finished No. 34 at the 2022 ISA World Surfing Games this year and we’re getting better every year.


Q. What results were you hoping for from the World Games?

A. I just hoped that we could compete with everything we have and show the world everything that we have practiced for. That is what gets us through to the next round of the Games in the end too.


Q. This was your third time competing at the World Surfing Games: How does it feel to be a pioneer of the sport in Korea?

A. I competed at the 2017 ISA World Surfing Games in Biarritz, France then in Miyazaki, Japan in 2019 and at Huntington Beach this year.

Being a pioneer really just means that there just weren’t many other people doing the thing that I love before me. I am grateful to be able to do something that I love and am focusing on what I can do and experiencing it to the full extent.


Q. To talk about the technicalities of the sport, can you explain how you score during your competitions?

A. It’s all about being able to execute and complete a higher-level technique in the critical part of the wave. You can get higher points if you combine different maneuvers that flow well together. I think that the best surfer is one who can show off everything that they practiced and also enjoy the event.


Q. What kind of weather and waves do you prefer when competing?

A. I actually like to surf when it’s slightly cloudy because my eyes and body feel less strained and also because the waves don’t die down easily in that kind of weather. As for waves, I like slower waves that have sharp edges. I think it might resemble my personality.


Q. Which beach did you get your sand for the Sands of the World Ceremony from?

A. The Sands of the World Ceremony is where people who love surfing from around the world come together to celebrate surfing. This year, I took the sand from Jungmun Beach on Jeju Island. 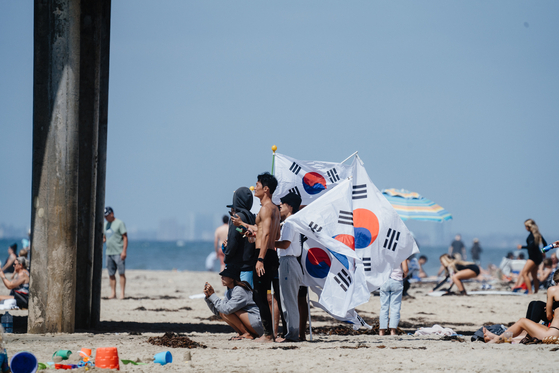 Members of the Korean national surfing team hold the Korean Taegukgi while watching the heats at the World Surfing Games in Huntington Beach, California.


Q. What first got you into surfing?

A. It was actually my little brother who got me into the sport. When we were young, he was the kind of kid who loved hanging out with his friends, but one day he suddenly started going to the beach to surf instead.

That made me curious and I remember it was a cold windy winter day when I first went to see him surf in the snow. What was more remarkable for me was that after taking a break out of the water for a while he would go back into the water despite the cold.

I asked him why and he replied “I can’t really explain it. You won’t understand unless you’ve tried it.” I got even more curious and started surfing the next summer. That following winter I went surfing with my brother and I’ve been surfing ever since.


Q. What needs to be done to help grow the sport in Korea?

A. Korean surfers are doing a good job in my opinion. However, I do think it would be helpful to train more strategically and to show off more of what we are capable of.


Q. How can fans support you and the other team members?

A. It means the world to me when people come up at the beach to say hi and tell me that they are rooting for us. That kind of support is what keeps us going. But you know, we could always use a hug too.