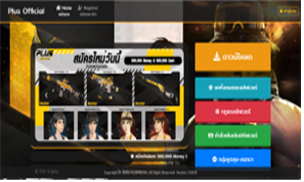 A screen grab of an illegally copied game in Thailand [KCOPA]

Kcopa said Wednesday that two pirate servers that copied games developed by Korean company Zepetto were shut down by Thailand’s Department of Intellectual Property (DIP), after the Korean copyright watchdog made a formal request to the Thai government.

Zepetto is the developer of first-person shooting games (FPS) Point Blank and Battle Carnival, which are popular in Southeast Asia.

The company filed a complaint with Kcopa and the Ministry of Culture, Sports and Tourism last year. Kcopa found four illegal servers and asked for cooperation from DIP.

Two servers were shut down as a result and investigations are ongoing into the remaining two. Kcopa did not specify which date the sites were closed.

“We will make more efforts to curb copyright infringements within Thailand, as games take up 70 percent of Korean content exports as a major Hallyu [Korean wave] product,” Kcopa said in a press release.