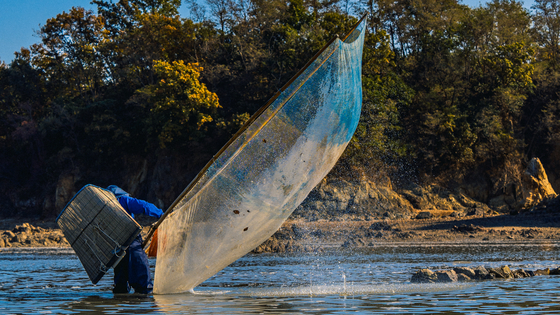 Sadujil is a traditional fishing technique unique to Baekmiri in Hwaseong, Gyeonggi. The tool is pushed and lifted up to catch not only small shrimp but also different types of fish. [KOREA CULTURAL HERITAGE FOUNDATION]


BAEKMIRI, Gyeonggi – There are a number of getbol or tidal flats along the west and southwestern coast of the Korean Peninsula. The vast mud flats that appear during low tides have long provided an important source of food and livelihoods for locals in the areas where they are located.

However, getbol have drastically decreased in size over the years due to reclamation works, especially in the Gyeonggi region which has seen rapid development.

According to Pyun Seong-cheol, a researcher at the Korea Institute of Regional Culture and Contents who has been studying Korea’s getbol for many years, the area of getbol in Gyeonggi has decreased to 167.7 square kilometers (64.7 square miles) when he last checked in 2018, from 1,179.6 square kilometers in 1987. 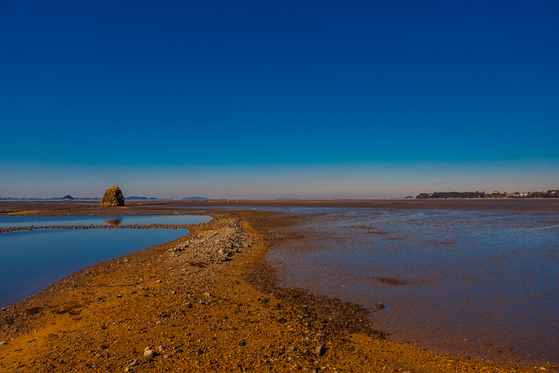 
The Baekmiri getbol in Hwaseong, Geonggi, is still a treasure trove for the villagers there. The traditional practice of maintaining tidal flats as communal property has been maintained to the present day in the form of village cooperatives in most of the villages formed around the getbol. Among them, Hwaseong’s Baekmiri is known to have a tight-knit operating system headed by Kim Ho-yeon, who has been heading the village for more than 20 years.

“Villagers here just won’t allow me to step down so I look like a dictator,” said Kim, chuckling. “I want to take a rest and travel more but there’s a reason every year that chains me to this role. It was especially hard to leave this year with the National Intangible Cultural Heritage designation.”

The Cultural Heritage Administration designated getbol eoro, or tidal flat harvesting, as a National Intangible Cultural Heritage a year ago on Dec. 20, 2021. Since then, villages, where getbol eoro have been a main source of livelihood, have been making efforts to come up with a proper system that would allow this tradition and the different rites that get performed before and after the harvesting to be handed down to the next generation.

Kim said other getbol villages have been making visits to Baekmiri to see firsthand the programs the village has been offering since 2007 in an attempt to maintain the tidal flats and continue the traditional fishing industry.

Kim said a lot of young visitors who visit to have a go at the firsthand programs want to try sadujil, a traditional fishing technique widely used in Baekmiri, in particular. But Kim says the village can only offer educational and demonstration sessions of sadujil at the moment as “it’s not as easy as it looks.” 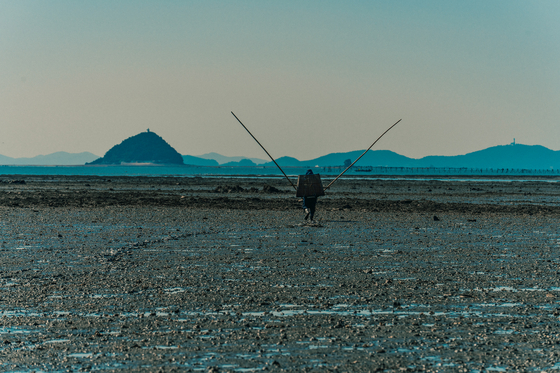 A fisherman from Baekmiri goes out to the mud flat for sadujil. [KOREA CULTURAL HERITAGE FOUNDATION]


Sadujil is not only used in Baekmiri but is also a common technique in other getbol villages in Korea. Pyun says such technique to catch small shrimp can also be seen in other parts of the world, such as Japan, Vietnam, China, Malaysia and France. But according Pyun, sadujil in Baekmiri is quite unique in that it has two different methods. Usually, fishermen only push this fishing tool in the direction of the rising tide. This is to catch shrimp. But with Baekmiri, they push and lift it up to catch both shrimp and a type of fish called gray mullet. Such technique, according to Kim, is unique to Baekmiri and has been handed down generation after generation.

“Though Baekmiri people don’t really like the taste of gray mullet, we must catch them because the fish is the main dish that goes on the ancestral ritual tables,” said Kim. 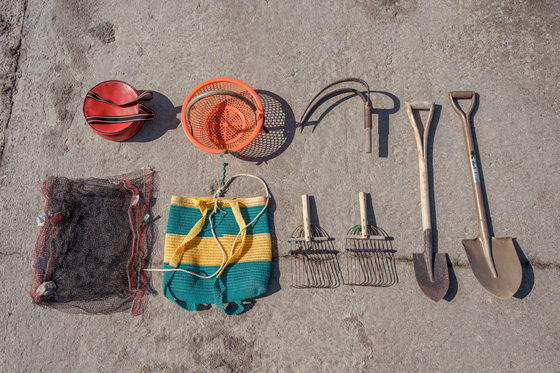 
When the tide has risen just enough, fishermen have to quickly begin sadujil before the water becomes too high. They create their own tool for sadujil — two different types of nets, one a lot denser than the other, get woven together then get attached to a v-shaped wooden pole. The wooden poles, made from juniper trees to withstand water, are about four to five meters long (13-16 feet). The fishermen lift this heavy tool every 30 to 40 seconds.

“It requires rhythm, speed and strength. You have to lift this heavy net up in the direction of the wave and the timing is important, otherwise, the wooden rods will just break in two.”

That is why only fishermen catch fish using the sadujil technique. Female villagers are spotted squatting down in different areas of the mud flat, using short hoes of different shapes to dig out different types of clams and long-legged octopuses. 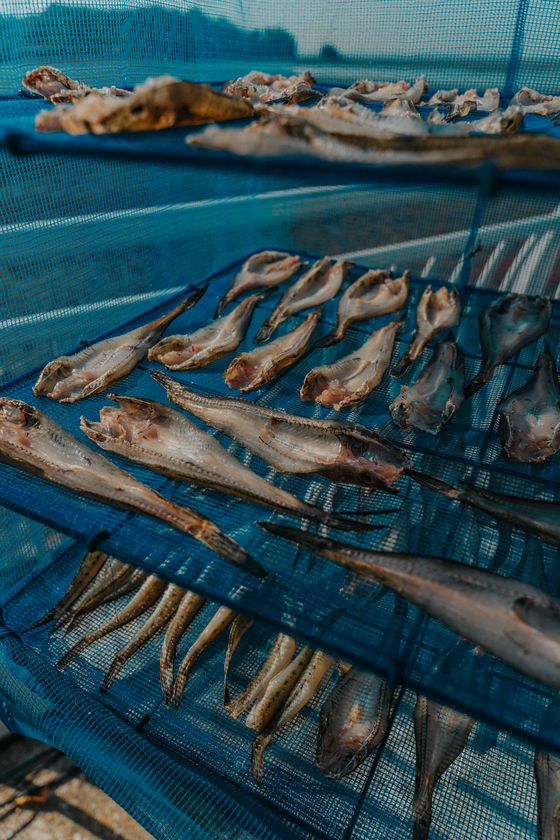 
Kim says there are only five fishermen left in Baekmiri who can catch fish through sadujil.

“We know it’s a strenuous job but its the best method to catch a large amount of fish and shrimp,” said Kim. “We are using this technique not just to keep the tradition alive but because it’s the best method. That is what we are focusing on when we carry out educational and experience programs in Baekmiri for young people.”

Lee Choon-sil is a 70-year-old villager who goes out to the mud flats nearly every day for getbol eoro. She also leads the village program that allows visitors to have a hands-on experience harvesting clams.

“There are a lot of foreigners who visit the village for the programs,” said Lee. “They have a hard time squatting down. One of the participants from Europe asked me if he could have a chair to sit down on, but I said through a translator that this has been the traditional method that’s been handed down generation after generation and that he should try to do it the proper way. We feel proud that more and more foreigners and young people are getting interested in traditional tidal flat harvesting.”

Though Baekmiri is known for its successful programs, Park says it still concerns him that the number of fishermen are decreasing. There are 120 villagers but with the aging population, only about 10 can come out to the tidal flats to fish.

“If this is the case for Baekmiri, I think the situation must be worse for other regions,” he said. “Because we operate experience programs and make profits from them, younger villagers are starting to show interest. We hope to share our knowhow with other getbol villages as well so that this practice of harvesting fish that enjoys a long history on the Korean Peninsula does not disappear.”