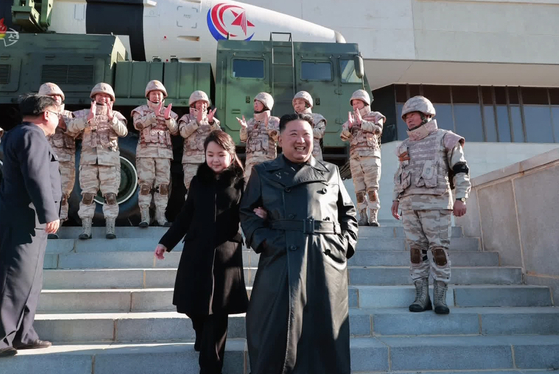 
North Korea celebrated its successful launch of an intercontinental ballistic missile (ICBM) on Nov. 18 by promoting key figures in its missile program — and, bizarrely, by bestowing an honor on the launch platform used to fire the missile.

According to the state-controlled Korean Central News Agency (KCNA), the Standing Committee of the Supreme People’s Assembly, the North’s rubber-stamp legislature, awarded a DPRK Hero title and Gold Star Medal, as well as an Order of the National Flag, 1st Class, to launch vehicle no. 321, which was used to fire the Hwasong-17 ICBM in the Nov. 18 test. It “proved before the world that the DPRK is a full-fledged nuclear power,” KCNA said, “capable of standing against the nuclear supremacy of the U.S. imperialists and fully demonstrated its might as the most powerful ICBM state.”

DPRK is the acronym for the North’s official name, Democratic People’s Republic of Korea.

Launch vehicle no. 321 is a transporter erector launcher (TEL), a type of mobile launcher that resembles a long truck and transports missiles to a launch site, raises the missile to the desired angle and then fires it.

While it is highly unusual that a launch vehicle was given the kind of honor usually reserved for people, the distinction highlights the importance of TELs in allowing the North to mobilize and deploy ICBMs with greater spontaneity and flexibility, evading South Korean and U.S. pre-launch detection capabilities.


While the North was able to launch short-range ballistic missiles (SRBM) from locations around the country, including hard-to-detect sites such as a reservoir, previous ICBM launches usually took place on one of the concrete runways at Sunan airfield near Pyongyang, usually with aid from fixed supports.

But it remains unclear whether the North will be able to easily deploy a significant number of Hwasong-17 ICBMs across the country, given the 24-meter length of the missile and its weight of over 100 tons once it is loaded with liquid propellant.

Hong Min, director of the North Korea research division at the Seoul-based Korea Institute of National Unification, told Yonhap in an interview that the honors bestowed on launch vehicle no. 321 is North Korea’s way of signaling it has fixed past issues with its TEL vehicles.

“While many analyses in the past believed the reason North Korea launched ICBMs from Sunan airfield was its TEL vehicles’ lack of maneuverability, the hero title [granted on the TEL used in the launch] is the regime’s way of showing it can deftly change its ICBM launch sites, and to show it can use TELs in the future to conduct surprise ICBM launches,” he said.

Launch vehicle no. 321 was not the only recipient of honors from the regime as it celebrated the successful ICBM launch.

KCNA reported Sunday that the regime had conducted a mass promotion of key officials in its military and researchers tied to its missile program.

Prominently mentioned in state reports were two people: Jang Chang-ha, head of the North’s Academy of National Defense Science, which leads research into the North’s missile and nuclear weapons programs, and Kim Jong-sik, head of the ruling Workers’ Party’s Machine-Building Industry Department, which is charged with manufacturing the country’s strategic weapons.

Both Jang and Kim were named in a separate Sunday KCNA report as having attended a commemorative photo session with North Korean leader Kim Jong-un.

According to the KCNA, Kim appeared at the photo session venue “with his beloved daughter,” who has appeared prominently in state footage of the successful ICBM launch.

State media, including the Rodong Sinmun, released a series of photographs on Nov. 19 and 20 showing the leader and his daughter holding hands and walking around together on the launch site and watching the missile take flight.

In September 2013, retired NBA star Dennis Rodman, who visited Pyongyang on the invitation of the North Korean leader, revealed to media he had held Kim’s baby girl “Ju-ae” in his arms, possibly revealing her name for the first time.

The daughter in the photographs of the missile launch, based on her presumed age, is thought to be that second daughter, Ju-ae.

The presentation of Kim’s daughter seems to appears to be a move showing North Korea’s confidence in the Hwasong-17 launch and its nuclear weapons program. It also appears to show regime security and the stability of the so-called Mount Paektu bloodline, referring to the North Korean ruling dynasty.