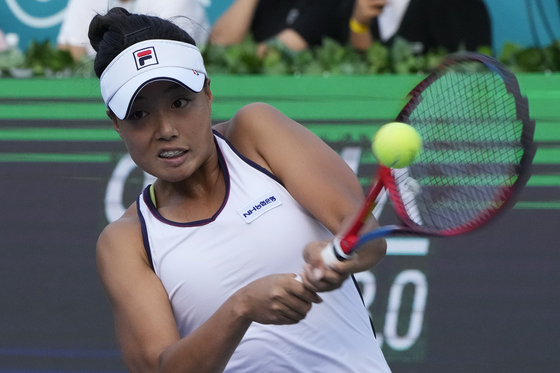 Jeong Bo-young returns a shot to Jelena Ostapenko of Latvia during the first round of the Korea Open at the Olympic Park Tennis Center in Songpa District, southern Seoul on Tuesday. [AP/YONHAP] 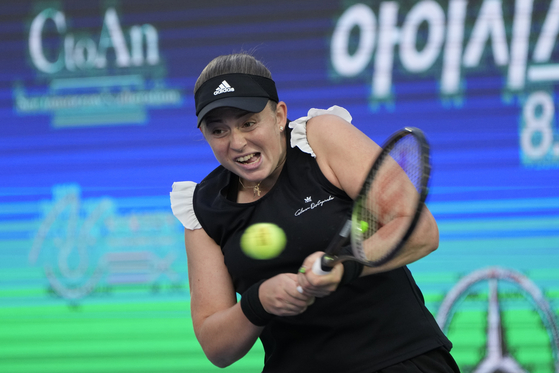 Jelena Ostapenko of Latvia returns a shot to Jeong Bo-young during the first round of the Korea Open at the Olympic Park Tennis Center in Songpa District, southern Seoul on Tuesday. [AP/YONHAP]


World No. 688 Jeong Bo-young put up a formidable fight against top seed Jelena Ostapenko of Latvia on Tuesday in the round of 32 at the Hana Bank Korea Open at the Olympic Park Tennis Center in Songpa District, southern Seoul.

Despite fighting through three grueling sets over two hours and 13 minutes, Ostapenko beat Jeong 7-2 in a final tiebreaker at the end of the third set.

This is Jeong’s second appearance at the Korea Open and, despite entering as a wildcard, she came within a few points of knocking off the top seed in the tournament.

Jeong started out her match by breaking Ostapenko’s first serve then went on to break the Latvian’s third and fourth serve game in the first set. Despite putting up a good fight, the first set ended 6-4.

Jeong started her second set like she had her first, breaking the top seed’s first serve. Then Jeong also broke two more of Ostapenko’s serves to take the second set 6-3, pushing the match into a third set.

However, the top seed was not one to back down, taking her sixth game and pushing the match to a seven-point tiebreaker.

Jeong won the first point, but the Latvian quickly added four points in a row. Jeong seemed to have lost her edge in the tiebreaker, conceding it 7-3.

Currently at world No. 688, 19-year-old Jeong is the ninth-highest ranked Korean in women’s tennis. Despite being a young player, Jeong has experience advancing to the round of 16 at the Korea Open.

“I try to take it one night at a time and today was a really tricky one,” said Ostapenko in a post-match interview on Tuesday. “But I want to take one match at a time and hopefully I can do well here.”

Countrywoman Park So-hyun’s run was also cut short on Tuesday after she was beaten by Kristina Mladenovic of France after a match that lasted almost three hours. Mladenovic beat Park three sets to two, taking the first set 6-4 and the last set 6-3. Park put up a good fight, winning the second set 6-4, but was unable to come back after Mladenovic broke her serve in the third set.

Park is now completely out of the Korea Open, having been beaten by Russian pair and third seed Ekaterina Alexandrova and Yana Dmitriyevna Sizikova in the women’s doubles on Monday. Park had paired up with Choi Ji-hee, who also is out of the singles tournament after losing to Ekaterina Kazionova in the qualifiers on Saturday.

Han Na-lae is the only Korean left in the women’s singles and will face Alexandrova in her round of 16 match on Wednesday.