The network usage fee debate in Korea is just about as baffling as it gets.

While the conflicting sides’ horns remain as tightly locked as they have been since 2020, the public sentiment and political views surrounding the issue have taken an unexpected turn in recent months.

On the one side, telecoms insist on collecting network maintenance costs from content providers (CPs). On the other, CPs argue that the burden is not theirs to shoulder and doing so will inevitably result in the increase of subscription fees for users.

For the layman, the network fee issue is often described as a highway established by a private company. The highway operator carries the initial burden of maintaining the road quality, but if one particular company heavily occupies the road and forces the constructor to perform additional work, who is responsible for that extra cost?

Just a few months ago, the public stood in favor of local telecoms — those who built the road — as did the court.

Last year, the local court ruled in favor of SK Broadband in a suit against Netflix, ruling that the streaming giant is obligated to negotiate the terms of paying network usage fees with the network operator. The court did not order Netflix to pay the SK subsidiary, but it did state that the internet provider held the right to demand network usage fees.

But content companies have been aggressively fighting back, and people have started to shift away from internet service providers (ISPs) to take the side of CPs, the likes of Netflix and YouTube. 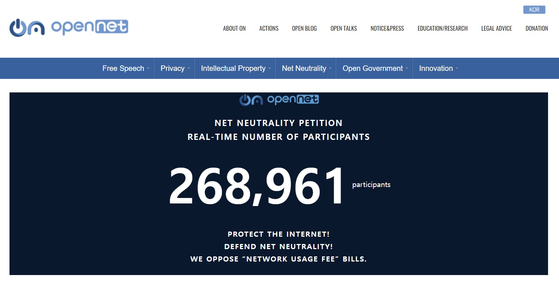 Over 268,000 signatures collected from Sept. 7 to Oct. 31 on Opennet, a nonprofit activist group in Korea, for a petition opposing bills to revise the law to require CPs to pay ISPs network usage fees [SCREEN CAPTURE]


As of October, tens of thousands of domestic users believe that telecommunications companies are harming the rule of network neutrality by demanding CPs pay network fees, according to an ongoing online petition.

Over 268,000 signatures have been collected from Sept. 7 to Oct. 31 on Opennet, a nonprofit activist group in Korea, for a petition opposing bills to revise the law to require CPs to pay ISPs network usage fees.

The shift began after seven teams of National Assembly members proposed an amendment to the Telecommunications Business Act to spell out and detail CPs’ obligations to pay up for using Korean networks to deliver their content to local users.

The so-called “Netflix law” that passed last December also dictates that CPs have a duty to “help” ISPs maintain network quality, but has failed to achieve tangible results because it does not define why or how such efforts should be made.

The recent bills, nicknamed the “Network usage fee law,” aim to clearly state why content companies need to pay and how much: bringing rise to immense backlash from CPs.

Whereas the Netflix and SK Broadband case was considered more of a feud between two private companies, a law trying to regulate all content companies is a different thing entirely, according to Choi Sung-jin, executive director at the Korea Startup Forum. 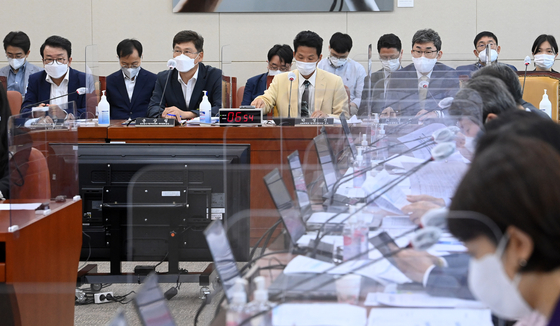 An open hearing is held at the National Assembly in western Seoul on Sept. 20 with experts from both sides of the argument taking questions from local representatives. [YONHAP]


“Should this bill be passed, it may be used to regulate many other companies that don’t seem affected at first,” Choi said during an open hearing held at the National Assembly on Sept. 20.

“Furthermore, if other countries decide to follow our precedence, then our own content companies will have to face network usage fees when they launch their services in other countries.”

On the other hand, ISPs argue that the internet network is a limited resource that private companies must pay out of their pockets to maintain. The more free-riders to the infrastructure, the less quality users are provided with their content, argued Yun Sang-pil, general manager of the external cooperation office at the Korea Telecommunications Operators Association.

“This is like the tragedy of the commons,” he said. “If everyone wants to free-ride and no one wants to pay for maintenance, all we’re left with is the desolation of the internet environment. Not only is it unfair to the local content companies that are already paying network usage fees, it’s dumping them with higher costs as a result.”

As of December last year, Google and Netflix each took up 27.1 percent and 7.2 percent of all internet traffic in Korea, a total of 34.3 percent, according to the Ministry of Science and ICT.

Out of the nation’s population of 51.6 million, YouTube had 41.8 million users in Korea, according to Mobile Index in September. 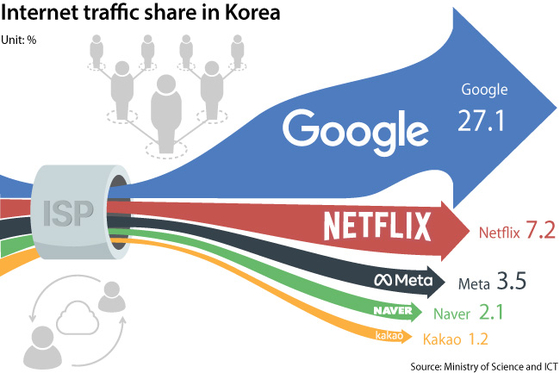 Though it’s clear that the popularity of streaming platforms has resulted in unprecedented traffic around the world, watchers are having a hard time forming a solid opinion on the matter because both sides refuse to give critical data on the issue, especially when it comes to concrete numbers.

Neither the CPs nor the ISPs are disclosing how much local content companies are paying for internet use, explaining that the deal is different for every content company and thus confidential. ISPs are also keeping the calculation methods of network fees and how much they have spent on network maintenance behind closed doors, only arguing that fees need to be paid.

Members of the Democratic Party (DP), many of which advocate for the ISPs, are also giving the bill a cold shoulder.

“There seems to be a problem with the network usage fee law,” wrote  DP Chairman Lee Jae-myung, on his Facebook on Oct. 2. “We’ll take a closer look.”

DP Rep. Jung Chung-rae also commented during a meeting held in September that the law is “a risky business that could lead to the destruction of local CPs in the name of protecting a handful of ISPs.” 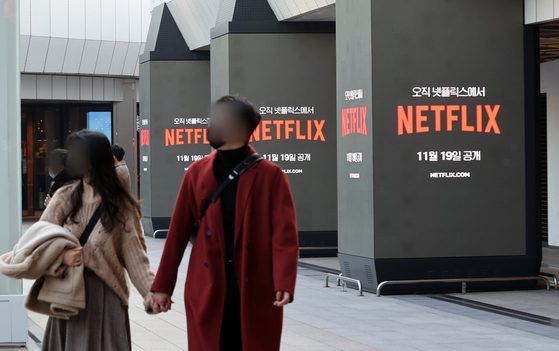 
If passed, the bill will likely give SK Broadband the upper hand in the upcoming ruling, as public opinion does not hold any legal binding power.

“The first ruling had already taken SK Broadband’s side, confirming that CPs do have to pay ISPs for internet maintenance costs. The details of how and how much will be up to the companies to decide, but, either way, a new law will influence the outcome of the lawsuit.”

Without revealing the numbers, the two sides are fiercely fighting to win the public over — with threats.

“The additional cost will give a disadvantage to not only the content providers but also the creators who cohabitate in the ecosystem,” he continued, asking readers to join in either Google’s online petition against the bills or the petition on Opennet.

Twitch, a U.S. streaming giant run by Amazon, reduced the maximum quality of its videos to 720p in Korea, citing “increased management fees,” but did not elaborate further. 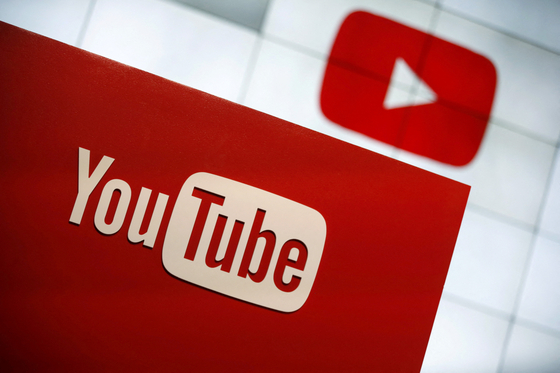 
Rep. Byun Jae-ill of the DP criticized Google for manipulating the public opinion through Opennet. According to data compiled by Byun’s office, Opennet was founded in 2013, wholly funded by Google’s 300-million-won ($210,000) donation, and received a total of 1.36 billion won as of 2021.

“Ever since the discussions on the network usage fee law began, Google has been carrying out opposing campaigns with Opennet,” Byun said.

“Google and Opennet must stop efforts to manipulate public opinion by citing false reasons, that it will increase creators’ burden, just for its own profit.”

The Korea Communications Commission, the government body in charge of the issue, remains indecisive, too.

“At the end of the day, it’s about the cost that’s needed to maintain and improve networks and who will be responsible for that cost,” KCC Chairman Han Sang-hyuk said during a parliamentary audit on Oct. 21. “The CPs and ISPs need to divide the cost fairly so that users’ costs are minimized.”

The bills have not been passed by the parliamentary committee in charge.

Netflix and SK Broadband will meet for the fourth round of hearings on Nov. 28.