Two buses and a minibus collide on Gyeongbu Expressway

Two buses and a minibus collide on Gyeongbu Expressway 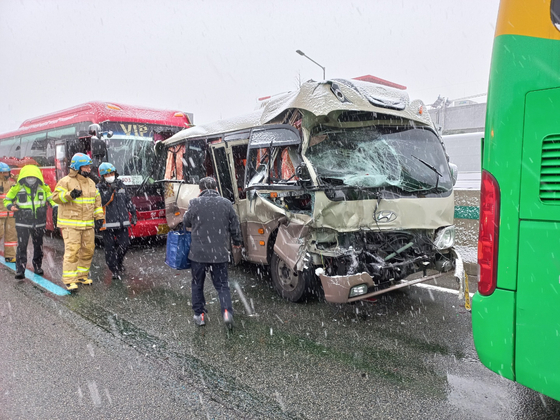 Police and fire fighters examine the scene of a collision between two large buses and a minibus on the Gyeongbu Expressway on Tuesday morning. [GYEONGGI DISASTER AND SAFETY HEADQUARTERS]


A collision involving two large buses and one minibus occurred at the Singal Junction of the Gyeongbu Expressway Tuesday morning, injuring 24 people and snarling traffic.

The Gyeongbu Expressway Singal Junction is located near Yongin, Gyeonggi. The collision took place in a bus-only lane of the expressway.

A total of 80 people were on board the three buses at the time of the accident. Among them, the driver of the minibus, a man in his 30s, suffered a serious back injury, while 23 others complained of chest pain and received treatment at a nearby hospital.

No life-threatening injuries were sustained, according to local press reports.

As traffic in the first and second lanes of the expressway near Singal Junction was backed up due to the accident, and 2.7 centimeters of snow fell in the Yongin area, cars were backed up over a 10-kilometer section of the expressway.

Congestion was cleared as of 1:40 p.m. Tuesday.

Police are investigating the accident.