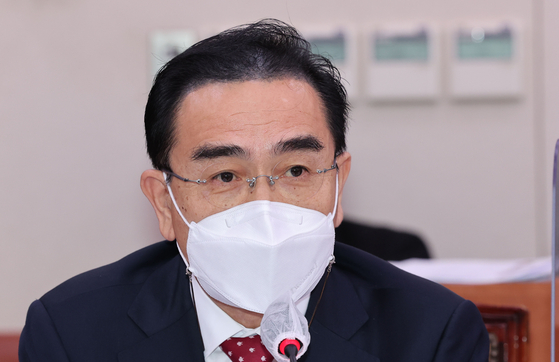 Rep. Thae Yong-ho of the People Power Party, who was previously North Korea’s deputy ambassador to Britain before defecting with his family to South Korea in August 2016, speaks after being named to the National Assembly’s foreign affairs and unification committee on Monday. [YONHAP]


The United States has admitted a North Korean defector as a refugee for the first time this year as South Korea’s reputation as safe haven for those seeking to flee the repressive regime has been greatly diminished.

The defector was a North Korean worker dispatched to an unnamed country to earn foreign currency for Pyongyang. He escaped to another country and sought asylum at a U.S. embassy there, according to reporting by Voice of America (VOA).

His refugee status was made possible by the North Korean Human Rights Act, passed by the U.S. Congress in 2004 and signed into law by then-President George W. Bush, which authorized the U.S. government to offer humanitarian assistance to North Korean defectors.

Under the act, 225 North Korean defectors have been admitted as refugees to the United States.

While South Korea has its own law to provide assistance to people fleeing the North — the North Korean Defectors Protection and Settlement Support Act — Seoul does not categorize them as refugees, but rather as South Korean citizens in accordance with the South Korean constitutional claim over the entirety of the Korean Peninsula.

According to Jae Seong-ho, a professor of law at Chungang University, this approach means North Koreans are in an unusual position with regards to South Korean government policy.

“Since the Constitution regards North Koreans as South Korean citizens, neither international agreements on refugees nor South Korean refugee policy apply to them,” he said.

While Seoul’s longstanding policy is to admit North Koreans as South Korean citizens after having confirmed their intent to defect, the Moon Jae-in administration’s decision to repatriate two North Korean fishermen who crossed into the South via the East Sea in November 2019 has highlighted the downsides of this approach.

In that case, Moon administration officials claimed that the two men were merely evading justice for allegedly murdering 16 crewmembers aboard their fishing vessel, and that refugee policy did not apply to them.

Besides its criminal and political implications in South Korea, the fishermen’s repatriation has had a chilling effect on maritime defection attempts by North Koreans, according to the office of conservative People Power Party lawmaker Thae Yong-ho, who served as Pyongyang’s deputy ambassador to London before he defected to Seoul with his family in 2016.

No defections or attempted defections by sea have been detected since the repatriation incident, according to data obtained by Thae’s office from the Unification Ministry.

“After the forced repatriation incident, North Korean officials are able to scare their people from escaping by claiming that even the South isn’t safe for defectors,” Ji said.