U.S. vows to use full capabilities to ensure security of South

U.S. vows to use full capabilities to ensure security of South 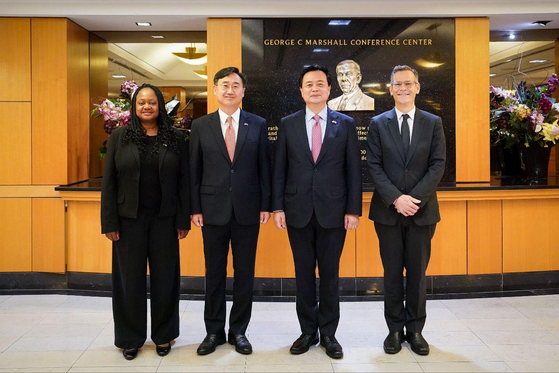 Washington promised to use “all available levers” and draw on the full range of its military and “other advanced non-nuclear” capabilities to provide extended deterrence for Seoul against Pyongyang.

The commitment was made in Washington last Friday as high-level officials from the United States and South Korea met in person for the first Extended Deterrence Strategy and Consultation Group (Edscg) meeting in nearly five years.

It was the first time ever that the meeting was held under the Yoon Suk-yeol administration, which launched in May.

In a joint statement issued after the meeting, both sides agreed to use all available levers — “including diplomatic, informational, military, and economic tools” — to strengthen and reinforce the U.S. security commitment to South Korea and strengthen deterrence against North Korean aggression.

“The United States reiterated its ironclad and unwavering commitment to draw on the full range of its military capabilities,” the statement continued, “including nuclear, conventional, missile defense, and other advanced non-nuclear capabilities.”

What was particularly noticeable in the joint statement, according to local experts, is that the two countries pledged to continue cooperation in “the space and cyber arenas, to include multi-domain exercises.”

A local intelligence source, who spoke with the JoongAng Ilbo on the condition of anonymity over the weekend, said the South Korean government had long asked Washington for cooperation in such advanced non-nuclear capabilities, but that each time, the U.S. “failed to give a clear-cut answer.”

“The two sides will continue to explore avenues to enhance Alliance strategic readiness,” the statement went on, “through improved information sharing, training and exercises, as they relate to nuclear and non-nuclear threats, including better use of table-top exercises.”

Both countries made clear that any nuclear attack from North Korea would be met with an “overwhelming and decisive response.”

The allies also agreed to strengthen coordination to deploy and exercise strategic assets in the region while highlighting the combined training of fifth-generation F-35A fighter jets in July and the upcoming deployment of the Ronald Reagan Carrier Strike Group in the region.

Unlike under the former Moon Jae-in administration, both governments agreed to hold the high-level Edscg annually. The next meeting will be held in the first half of 2023 at the expert level.

The bilateral meeting came a week after North Korea adopted a new law stipulating that it will “automatically and immediately” launch a nuclear strike to attack the origin of any provocation if the “command and control system” of its nuclear forces is in danger of an attack, an apparent reference to North Korean leader Kim Jong-un.

The new law states that a nuclear strike could be triggered if an attack on its nuclear weapons were imminent; if the country or its people were under threat; or to gain the upper hand during war.

Kim was quoted by the North’s state-run media the same day as saying that there will be “absolutely no denuclearization, no negotiation and no bargaining chip to trade,” and that he would not surrender his nuclear weapons even if his country faced 100 years of sanctions.