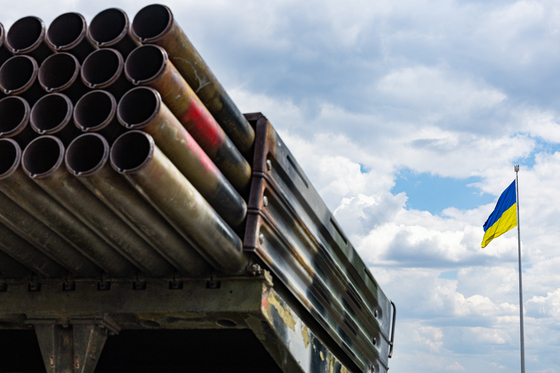 A Russian BM-21 rocket launch system captured in the Donetsk region by the Ukrainian military on display at the Museum of Regional Conflicts in Kyiv on June 17. North Korea is one of the few countries to recognize and offer support for the Russian-backed separatist Donetsk People’s Republic and Luhansk People’s Republic. [YONHAP]


Russia’s invasion of Ukraine may encourage North Korea’s development of nuclear weapons and give leader Kim Jong-un reason to believe he has “greater freedom” to conduct provocative acts, according to the U.S. Congressional Research Service.

According to a September 2022 update on North Korea, Russia’s invasion of Ukraine — in breach of a 1992 agreement by Kyiv to give up Soviet-era nuclear weapons on its territory following independence in exchange for security guarantees — “may strengthen arguments inside North Korea that denuclearization would increase the country’s vulnerability to larger foreign powers.”

The report noted that that Pyongyang’s perception of a zero-sum competition between the United States and its allies and partners on one side and China and Russia on the other “could embolden North Korea,” especially if Kim expects China and Russia to refuse to penalize his regime for its nuclear weapons program.

The report noted the possibility that Moscow and Beijing could even provide economic assistance to Pyongyang to maintain regime stability, similar to how they supported North Korea during the Cold War.

The Congressional Research Service report noted that Russia and North Korea’s joint isolation from the international community could stiffen Moscow’s refusal to support new sanctions resolutions introduced by the United States at the United Nations Security Council or enforce existing ones, especially since North Korea has expressed support for Russia’s actions in Ukraine.

“Russia’s hostile relations with the United States make it unlikely to productively engage in negotiating with North Korea, despite its earlier participation in the Six-Party Talks in the early 2000s aimed at brokering a deal that would curtail the DPRK’s nuclear weapons program,” the report said.

North Korea is one of the few states that has officially recognized the Donetsk People’s Republic and Luhansk People’s Republic, Ukrainian regions controlled by Russian-backed separatists that Moscow is aiming to annex by possible referenda that have already been denounced as illegal by most of Europe, the United States and Canada.

The Donetsk People’s Republic has publicized North Korea’s offer to dispatch workers to aid in the region’s reconstruction once Pyongyang lifts its own Covid-related border restrictions.

North Korea is also suspected of directly supporting Russia’s war effort in Ukraine by supplying it with artillery shells and rockets, media reports of which were confirmed by the U.S. Department of Defense earlier this month.