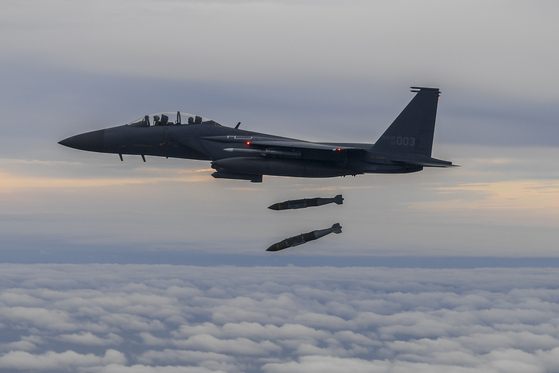 A South Korean F-15K fighter fires two Joint Direct Attack Munition (JDAM) guided bombs at a firing range on the uninhabited island of Jikdo in the Yellow Sea on Tuesday evening in response to the North Korean launch of an intermediate-range ballistic missile (IRBM) that flew over Japan in the morning. [JOINT CHIEFS OF STAFF]


The USS Ronald Reagan is turning around and coming back to the East Sea to respond to North Korea’s launch of an intermediate range ballistic missile (IRBM) over Japan on Tuesday, according to the South Korean military on Wednesday.

The aircraft carrier’s U-turn, which Seoul’s Joint Chiefs of Staff (JCS) described as “highly unusual,” is meant to “strengthen the joint South Korean-U.S. readiness” and “showcase the steadfast determination of the South Korea-U.S. alliance to respond sternly to North Korea’s continuous provocations and threats,” according to the JCS.

The USS Ronald Reagan was heading away after finishing four-day joint naval exercises with the South Korean Navy in the East Sea on Sept. 29. The Ronald Reagan carrier strike group arrived in Busan on Sept. 23

The decision to send the group back to the East Sea follows a joint pledge by South Korean President Yoon Suk-yeol and U.S. President Joe Biden during a summit in Seoul in May to deploy U.S. strategic assets to South Korea.

The four-day exercise in the East Sea involved more than 20 vessels, including the aircraft carrier, the nuclear-powered USS Annapolis submarine and South Korean destroyers ROKS Seoae Ryu Sung-ryong and ROKS Munmu the Great.

North Korea has conducted five missile tests in the past 11 days, with the first taking place on the morning of Sept. 25, two days after the aircraft carrier’s arrival in South Korea.

The North launched two missiles last Wednesday, another two the following day, two on Saturday, and a single IRBM on Tuesday.

While the North’s state media has remained silent on the recent spate of tests, observers believe they were a response to the allies’ joint naval exercises, and particularly the participation of the Ronald Reagan.

Experts believe the IRBM launched by the North from Mupyong-ri, Chagang Province on Tuesday morning to be the same Hwasong-12-type missile last fired in January.

The IRBM flew farther than any before — 4,600 kilometers (2,850 miles) — travelling over Japan before landing in the Pacific Ocean, reaching an apex of 1,000 kilometers and a terminal speed of Mach 17 in its final re-entry phase, according to South Korean military authorities.

In response to the test, a South Korean F-15K fighter fired two Joint Direct Attack Munition (JDAM) guided bombs at a firing range on the uninhabited island of Jikdo in the Yellow Sea on Tuesday, the South Korean military said. 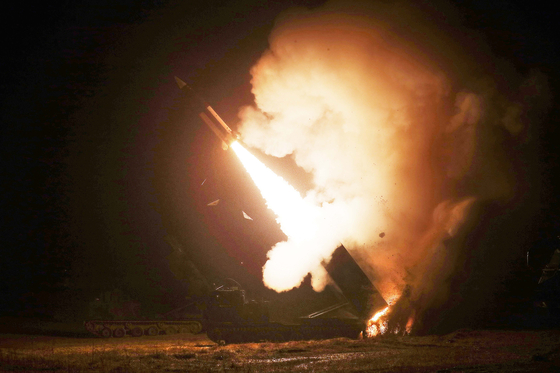 The South Korean and U.S. militaries also each fired a pair of U.S.-made Army Tactical Missile System (Atacms) surface-to-surface missiles, according to a Wednesday statement from Seoul’s defense ministry.

The ministry said the Atacms launches had been done in retaliation for Pyongyang’s farthest-ever missile test, following up on President Yoon’s promise of a “stern response.”

“In both calls, the national security advisors consulted on appropriate and robust joint and international responses and National Security Advisor Jake Sullivan reinforced the United States’ ironclad commitments to the defense of Japan and the ROK,” she said, referring to South Korea by the acronym of its official name, Republic of Korea.

Fighters from the U.S. Marine Corps and the Japan Self-Defense Forces also conducted a joint drill, the White House said.