[Walk in the park] Netherlands, Korea share their love for, and with, tulips

[Walk in the park] Netherlands, Korea share their love for, and with, tulips 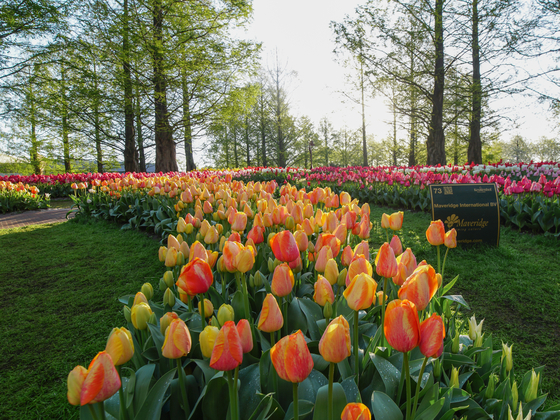 Tulip gardens in Keukenhof, Lisse, Netherlands, in May 2022. [KEUKENHOF]


The bulbs of Dutch tulips begin traveling beyond the borders by fall so that come spring, they can show up in full bloom across festivals around the world, even at the pope’s Easter Sunday Mass in Rome.

When the Covid-19 pandemic put a halt to some of these decades-long traditions and even barred locals from seeing their 800 or so varieties of tulips abloom at one of the world’s largest flower gardens, Keukenhof, for two years in a row, one tulip festival in Korea managed to keep traditions alive.

“It was being abroad and hearing people talk about tulips that really awakened my love for them,” said Joanne Doornewaard, ambassador of the Netherlands to Korea, speaking at the embassy in Seoul on May 17. “Koreans love flowers, it’s not hard to see when you spot them posing with the tulips at the annual festival in Everland.”

Although the flower did not originate in the Netherlands, the country has fast become the tulip capital of the world, sourcing some 90 percent of tulips worldwide.

These tulips have made their way annually to Everland, an amusement park in Yongin, Gyeonggi, since 1992. The park showcases over 1.2 million clusters of tulips in its regular tulip festival from mid-to-late March every year.

Even as Keukenhof closed its doors from 2020 to 2021 due to the social distancing guidelines in place, the tulip festival in Yongin was able to bring in the flowers in time due to Korea’s generally open-border policy through the pandemic. 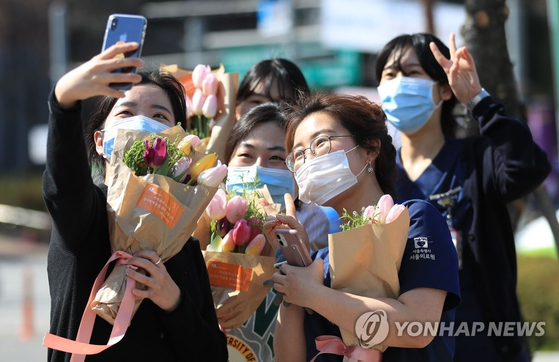 Nurses at a hospital in Jungnang District, central Seoul, pose with bouquets of tulips gifted from the Netherlands Embassy in Seoul on April 8, 2020. [YONHAP]


Bouquets of Dutch tulips also turned up at the doors of Korean hospitals in early 2020 in an event organized by the Dutch Embassy in Seoul to encourage the doctors and nurses working long shifts of testing and treatment for the coronavirus.

Ahead of the annual online registration to reserve a spot to attend Keukenhof in 2023, which opens up next month, the Korea JoongAng Daily sat down with Doornewaard to find out more about the Dutch and Korean passion for horticulture, and get some tips on gardens and parks to visit in the Netherlands.


The following are edited excerpts of the interview. 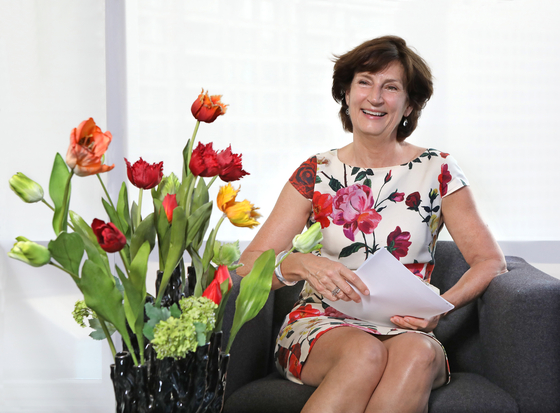 Dutch Ambassador to Korea Joanne Doornewaard speaks with the Korea JoongAng Daily about gardens and parks to visit in the Netherlands at the embassy in Seoul. [PARK SANG-MOON]


How did Keukenhof begin?
The garden in its current form was first experimented in 1949 when a group of 20 florists and growers came together to showcase flowers that form bulbs, with hopes to give a boost to their industry. The idea was that they could show the newest varieties at the garden, and it was a big hit — they welcomed 236,000 visitors when they opened the garden to the public in 1950.

Today, the garden is open to visitors for three months a year, focusing on 7 million bulbs planted in the fall to flower during the spring time.

The Keukenhof grounds date back to the 15th century when it was part of a hunting ground. The estate was purchased by a naval commander, Adriaen Maertensz Block, in 1638, who built the Keukenhof castle in 1641 on the ground that covered some 200 hectares. After that, the castle gardens were transformed by Jan David Zocher and his son Louis Paul Zocher, who were hired in 1857 by the owners of the estate, Baron and Baroness Van Pallandt. The design was done in the English style, which still remain the foundations of Keukenhof.

The centuries-old history of the area also means visitors get to enjoy the flower beds under the shade of some trees that have seen all this history. 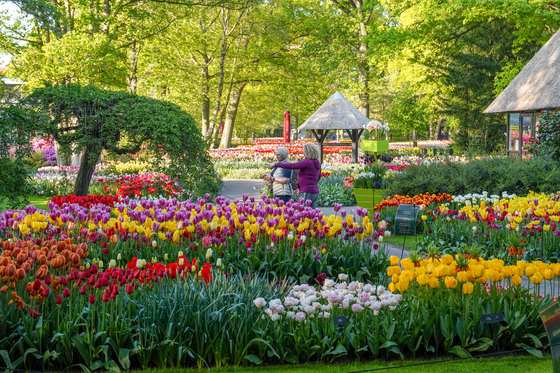 Keukenhof in this file photo dated May 15. [KEUKENHOF]

Any tips on the best ways to enjoy the garden?
We have hundreds of growers that are selected every year to showcase the new, best species. When it comes to tulips, the Netherlands are known to cultivate a lot of different ones including the double tulips, tulips of all kinds of colors, or tulips with fringe, so it will be fun to be on the lookout for what some of the new species are.

The garden is also home to all kinds of bulb flowers, like narcissus, muscari and hyacinths, and the gardeners would have spent months trying to make sure that all flowers are equally bloomed throughout the garden.

Parts of the garden will be themed after certain colors, like red, green, white and others, and if you visit on a rainy day, the flowers galore continues in the glasshouses so visitors can make a trip regardless of the weather.

Because the garden is very conveniently located between the Hague and Amsterdam, it will be easy to combine with other touristic sites. 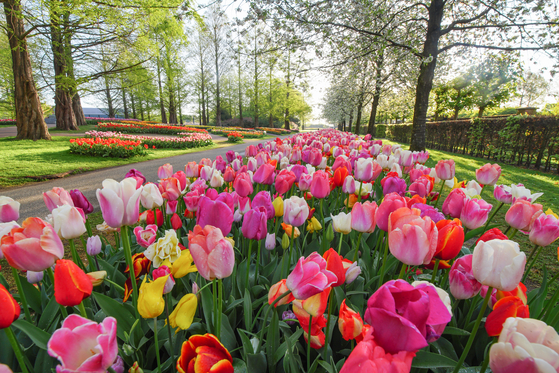 Keukenhof in this file photo dated May 15. [KEUKENHOF]

This year, the Netherlands was also the host of the global horticultural expo, the Floriade. Where do you recommend visitors drop by in addition to the expo to experience the flora and fauna in the Netherlands up close?
There is a famous park right at the center of Amsterdam, called the Vondelpark. Designed much in the landscape form, the park is a good place for walking, jogging and bringing children. If you are in Hague, I suggest dropping by the Haagse Bos, right close to the central station. It’s a big park, you’ll see lots of people walking their dogs there, and many birds perched on trees.

In the Utrecht, there is the Beatrix Park named after our former queen. The park is interesting because it was designed after what the residents of the area said they’d like in the park, and it’s a model I heard that the Yongsan Park may follow. 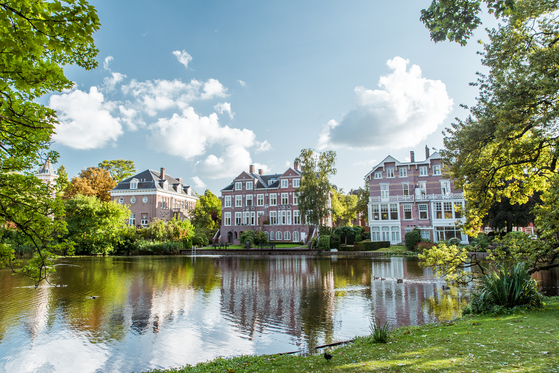 Villa at the Vondelpark in a file photo provided by Amsterdam & Partners. [KOEN SMILDE] 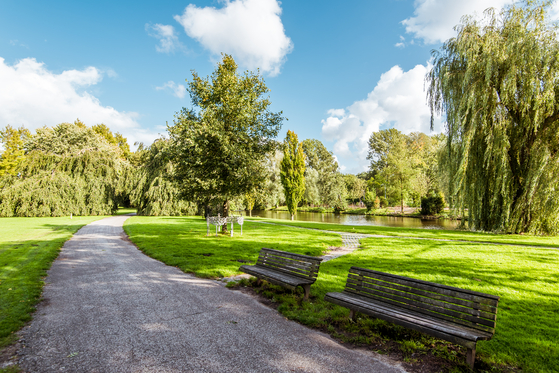 The Beatrixpark in Oud-Zuid, or the Old South, of Amsterdam, the Netherlands. [KOEN SMILDE]

Would you say it’s part of the Dutch culture to keep a garden at home?
Not everyone does it. Here you have a lot of high-rise [apartments]; in the Netherlands, we don’t have that many. Some people [in the Netherlands] do try to keep a garden at home, if not on the ground, then at least on the balcony, with pots of plants and flowers. Some people consider gardening a therapy, while for other people it can be a nuisance because it could be a lot of work. I am of the former, I love to keep my garden. But in Seoul, with life being quite fast-paced, I haven’t found the same amount of time for gardening that I would have back in the Netherlands.

I did plant tulips last year and had them fully bloomed in my garden this year. With tulips, you just have to remember to take off the older flower when tulips are done flowering, so that the bulb can grow again and you can use it for the following year. 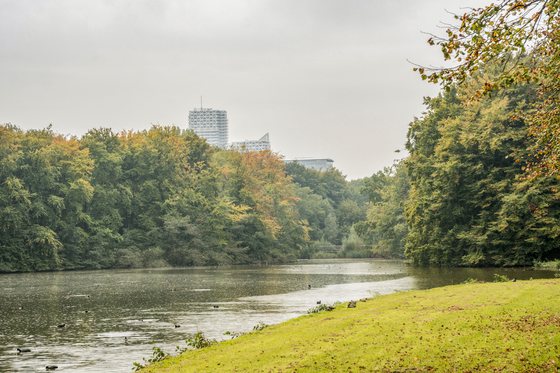