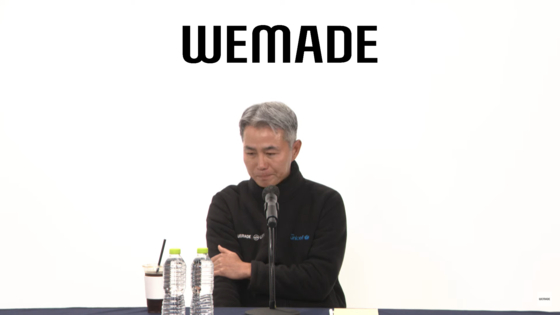 
Wemade’s coin is in trouble, and it’s taking the company down with it.

The five exchanges — Upbit, Bithumb, Coinone, Korbit and Gopax — will stop the trading of Wemix coins from Dec. 8, 3 p.m. Owners will be able to withdraw their money for a month after trading ends.

In a teary press conference, Wemade CEO Chang Hyun-guk said that the decision was arbitrary and unfair and that he would fight it in court.

“This is gapjil!” he said repeatedly during a press conference held Friday morning, using the Korean word for abuse of power.

The decision comes a month after Wemix was flagged with an Investment Warning by DAXA because of the differences between the number of tokens that were to be distributed according to company disclosures and the actual number outstanding.

“There were numerous errors found in the files they handed in, and they repeatedly changed the content of the files even after submission,” Upbit said. “A rare situation has occurred where our level of trust in management capabilities has plummeted to a point where it cannot recover.”

Wemix plunged from 2,200 won ($1.7) on Thursday when the news broke to 800 won Friday morning, losing over 95 percent of value since November last year.

The company’s stock has also been nosediving during the same period. It closed at 39,400 won on Friday, down 30 percent, the daily trading limit, compared to the previous day and down 85 percent compared to the same month last year.

Wemade CEO Chang had assured investors that the possibility of delisting is “almost zero” in a press conference held Nov. 2.

According to Chang, the difference occurred because the company failed to immediately report additional tokens to the market as it was planning to do so in a quarterly report scheduled for the end of the year.

The comment actually had a negative influence on DAXA officials and led to Thursday’s decision, according to local news outlet Block Media.

“Chang Hyuk-guk’s assurance that ‘Wemix will not be delisted’ had a negative effect,” a DAXA official reportedly told Block Media.

“We have fully provided with all the data that Upbit had asked for,” said Chang in Friday’s press conference. “Upbit never properly explained what its criteria are and just told us to ‘do what we can and see,’ without giving us detailed feedback of what’s missing and what’s not.”

Upbit is the only Korean crypto exchange out of the five DAXA members that demanded Wemade submit its plans on how many coins it’s planning to distribute in the market. But there are numerous coins that are trading without submitting their planned amounts, according to Chang.

“If the plan is so important, then why is it not applying the same rules to other companies?” Chang said. “If we are being penalized for submitting a plan and making changes along the way, then should we not have submitted anything at all, like the others? Why are we being punished for going the extra mile?”

“Upbit is a private company but it’s also a trading platform for social assets. This gapjil and unfairness is social evil.”

“I am not saying that we’ve done nothing wrong,” he added. “I will take full responsibility for our faults as the decision-maker, but we ask that Upbit make its rules clearer.”

Wemade will file a complaint in court to get the decision revoked.