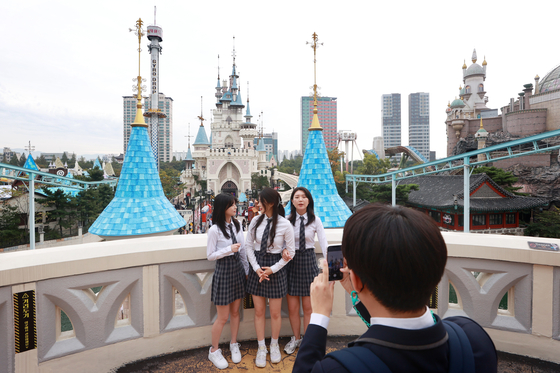 
Squealing boys and girls in uniforms running around high on adrenaline are to be expected in amusement parks. But at local funfairs, many in these school outfits aren’t actually students.

Twenty-eight-year-old nurse Gang Yu-bin has taken part in this crowd of adults disguised as students, donning a chic school outfit with a selfie stick in hand.

When she and her friends decided in September to visit Everland, a theme park in Yongin, Gyeonggi, Gang was excited because she hadn’t been on a roller coaster in years.

While searching around online for rides inside the park, she encountered an endless stream of photos of adults in school uniforms.

She quickly realized that wearing a school uniform was a sort of hip new dress code at amusement parks these days and decided to give it a try.


But where would she get a school uniform?

Gang’s problem was quickly resolved when she discovered there was a school uniform rental shop inside the theme park. 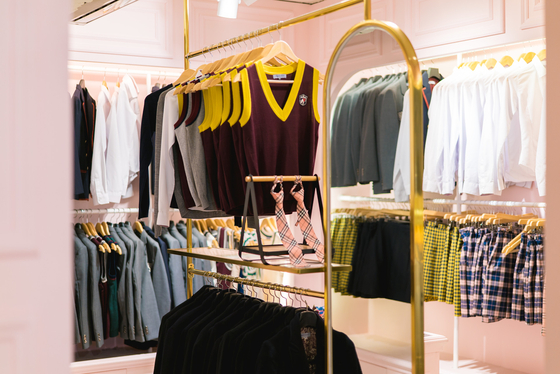 
Similar rental shops have popped up across Korea over the last few years.

Gamsung Gyobok, one of the largest and most popular school uniform rental stores in Korea, has nine shops across the country, four of which opened this year. It has been in business since 2019.

Two other major uniform rental shop franchises, Ever Gyobok and Ewha Gyobok, have each been open since 2019 and 2018.
Most of the stores are located inside or near local theme parks.

Trying on Korean uniforms at a local amusement park is a popular cultural experience for foreigners visiting Korea as well.

Uniform rental shops are also listed on travel sites Tripadvisor and Klook, which explain the facilities as a place to enjoy a “unique cultural experience in South Korea.”

“Another fun and unique costume rental experience in Seoul other than wearing the hanbok [Korean traditional clothing] in Gyeongbok Palace,” reads one English review on Klook for a school uniform rental shop in Korea.


But what’s the whole idea behind wearing school uniforms to amusement parks anyway?

“I was hesitant about it at first,” Gang admitted. “I wasn’t sure if wearing a school uniform as an adult would be appropriate.

“But I decided to wear a uniform because I was craving a new, fun experience, which it ultimately was. Wearing the uniform helped make the entire day feel like a special event. It also reminded me of my high school days.”

She added that the outfit wasn’t as uncomfortable as she had worried.

“I wore shorts underneath, and the skirt was actually quite small in width so it stuck to my body well.”

“We went to the park to wear the uniforms, not necessarily to enjoy the rides,” said Kim Su-yeon, 31, who went to Lotte World in Songpa District, southern Seoul, with her husband last month.

The trend of adults wearing school uniforms began as a popular prank that university students would pull on April Fool’s Day around the late 2000s.

The trend got picked up by businesses such as movie theaters, shoe shops and amusement parks as a sales event that gave discounts to people who came to the venue dressed in school uniforms on April Fool’s Day.


The word quickly spread and the events received positive feedback from the public who enjoyed putting on their old uniforms while also reaping significant discounts.

Especially in amusement parks, essentially closed off from the outside world, people tended to be less self-conscious about dressing up as students.

“It felt awkward when I first put on the uniform, but once I got into the park, I saw so many other people wearing similar school outfits as me and I quickly felt relieved and comfortable,” said Gang. 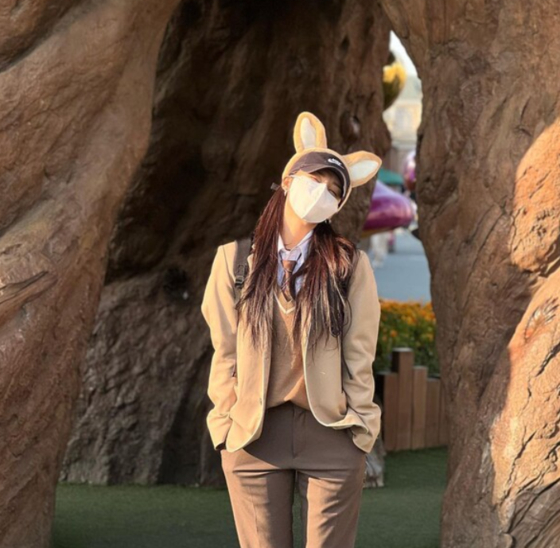 Singer and actor Jeong Eun-ji in a uniform at Everland in Yongin, Gyeonggi [SCREEN CAPTURE]


With the rise of social media and the rental shops that began popping up around 2019, wearing a school uniform to an amusement park began to make its way onto people’s bucket lists and couples’ must-do date lists.

At this point, people weren’t wearing uniforms just to get the discounts; rather, they were going for the experience of having their photos taken and feeling like they were reliving their younger days.

“Walking around in a uniform made me feel liberated from my age,” said Kim. “I felt like a kid again, like I could do and be anything I want.”


Are these uniforms the same as school uniforms that students in Korea actually wear?

“They were more colorful and fancy than to normal uniforms, and shorter and tighter as well,” said Gang. “I tried on the boy’s uniform as well and the pants were really tight, even for me! It seemed like the uniforms there were meant to be worn so that people could look good in the photos.”

But still, compared to real school uniforms in other Asian countries, Korean uniforms tend to be more on the stylish side and influenced by changing fashion trends, said Jo Tae-hee, a PR employee from local uniform company Hyungji Elite.


Hyungji Elite sells its uniforms in China. It established a joint-venture company with Bono, a Chinese fashion label, in 2016. Its recorded a profit of 18.82 billion won ($13.9 million) from July 2021 until the end of June this year.

From the late 1990s, school uniform brands began promoting their clothes with phrases like “idol fashion,” claiming that its clothes make students look slimmer. Some of the school garments at this time included fitted blazers, skirts above the knee and narrow pants.


For over a decade now, four large clothing companies — Smart, Hyungji Elite, Ivy Club and Skool Looks — dominate about 90 percent of the local school uniform market, and their outfits are largely affected by local trends and popular culture. 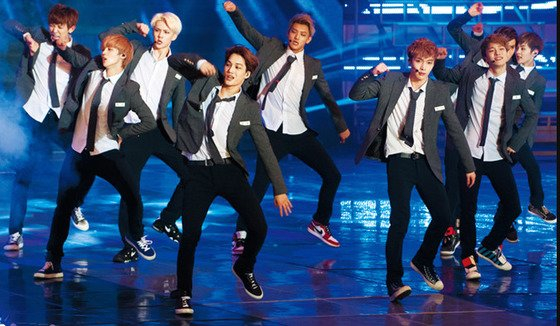 
However, several uniform brands have come under fire by the public for creating and promoting uniforms that encourage more overt sexuality and objectification.

In Skool Looks’ 2015 ad, it used phrases like “Let’s see who’s more skinny!” and “Squeeze the fat with the jacket.” Hyungji Elite in 2014 also promoted “V-line Skirts” for girls and “Skinny Pants” for boys.

After such backlash in the 2010s, companies have been more careful about how they advertise their products, said Jo, but still, many continue to take style into significant consideration, and designs are influenced by contemporary Korean culture such as K-pop, K-dramas and Korean reality shows.


What’s the role of school uniforms in K-Culture?


“School uniforms have been worn by singers since the ’90s, but the style that is popular today in amusement parks and even for actual school uniforms can be traced back to f(x)’s “Rum Pum Pum Pum” for girls and Exo’s “Growl” for boys, both released in 2013,” said Hwang Jin-joo, a veteran stylist in the K-pop industry.

School uniforms tend to be a popular choice of wardrobe, especially for younger K-pop stars who are just starting out their careers, according to Hwang, because they relay a sense of pureness and freshness. 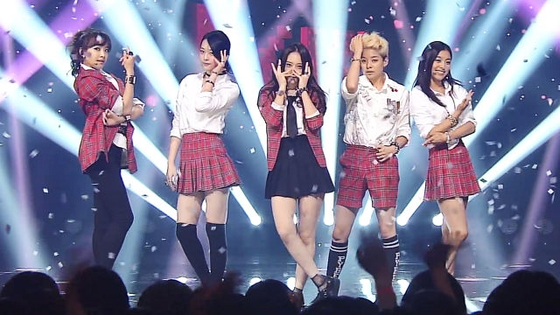 
Such an outfit clearly worked for Mnet’s K-pop girl group survival show “Produce 101,” which first aired in 2016. The sight of 101 young girls all donned in pink school uniforms was slightly bizarre, yet clicked with the public. The girls who became finalists saw huge commercial success as the project girl group I.O.I, topping music charts and nabbing rookie awards at local music award ceremonies. Its success has also led to three more seasons of the show.


Also around the same time, JTBC’s school-themed talk show “Men on a Mission” began airing in 2015, which shows regular panelists and its weekly guests all sporting school uniforms.

Korean dramas have consistently been using school uniforms as part of their go-to wardrobe as well, such as KBS’s “Boys Over Flowers” in 2009, “Dream High” in 2011, SBS’s “The Heirs” in 2013 and more recently “All Of Us Are Dead,” which was released in January on Netflix. 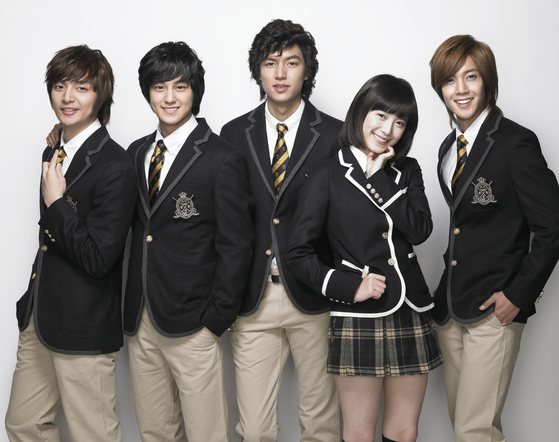 What do actual teenagers today think about wearing school uniforms to amusement parks?

“I don’t quite understand it,” said Lee Tae-hee, 17, who goes to school in Gyeonggi. “I’ve definitely been confused about why this is a popular thing to do for adults. I don’t see it as a negative thing necessarily, but I also don’t really want to be part of it. School uniforms are uncomfortable even just sitting and studying.”

Search the keywords “comfortable school uniform” on the public Blue House petition boards, and over 100 results will come up. Most of them were started by students.

“Please improve our uncomfortable school uniforms,” reads the title of one post. Another reads, “We need more comfortable uniforms for a better school life.” 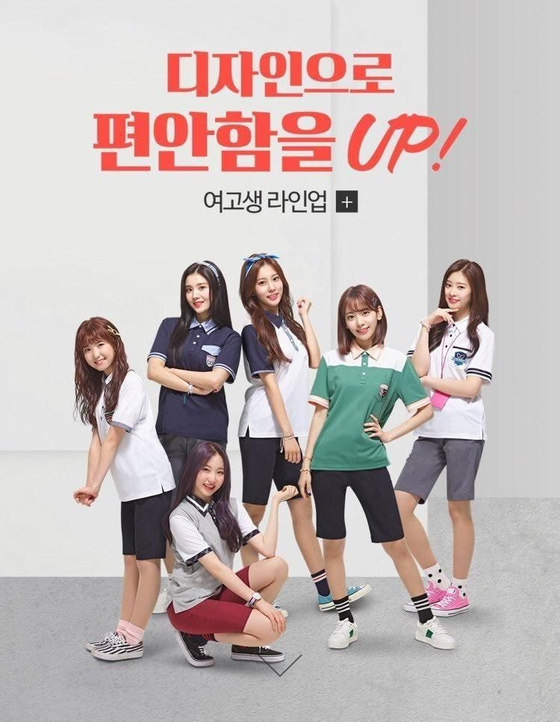 
Lee has gone to an amusement park wearing her uniform, though: once, when she was in middle school.


“There wasn’t any meaning behind it. We were just wondering what to wear and decided on our uniforms because it was the easiest choice,” she said.

“It’s kind of ironic that adults wear uniforms to amusement parks. School and uniforms for us students are sort of suffocating, both physically and mentally, yet adults nowadays perceive it as a cute outfit.”


Pop culture critic Jeong Deok-hyun said that adults in uniforms, at its core, is about nostalgia.

“Humans tend to glamorize the past, so for adults, wearing school uniforms is like jumping into a time machine that is full of great memories — they feel like they’re going back to the better days.”