Left: Civic organizations hold an anti-death penalty rally outside the Constitutional Court in central Seoul on July 14. Right: A man puts on a one-person protest demanding death sentences to be carried out in Korea in June, 2019. [YONHAP,JOONGANG ILBO]


Yoo Young-chul, a serial killer who killed at least 20 people; Kang Ho-soon, a serial killer who raped and killed 10 women; Lim Do-bin, an army sergeant who killed five soldiers and wounded seven others in a shooting spree — these are some of the names of Korea’s highest profile criminals who have been sentenced to death but still live to this day.

Korea is officially pro-capital punishment, but no one has actually been put to death for the last 25 years.

With the death penalty only really existing on paper today, the Constitutional Court is revisiting the policy to discuss whether capital punishment should continue to be legal in Korea.

On July 14, the Constitutional Court held a public hearing on the constitutionality of the death penalty.

The biggest issue being discussed in the constitutional trial is which is more important: Human dignity or justice.

One side claims that the death penalty violates the right to life, while the other refutes that it prevents violent crime and makes society safer. 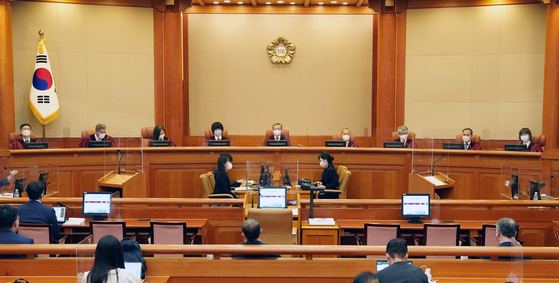 The Constitutional Court holds a public hearing on the constitutionality of the death penalty on July 14 in central Seoul. [YONHAP]


Why review the death penalty now?

The Constitutional Court case was put forward by a man surnamed Yun who was convicted of killing his parents, after the prosecution called for Yun be put to death during court hearings.

He was eventually given a life sentence, but his petition still went through to the Constitutional Court in February 2019.

Yun was found guilty of killing his parents for money in January 2018 after being sentenced to eight months in prison for fraud in 2017. He is represented by eight attorneys including three from Duksu Law Offices and one from HM Law Office.

Yun’s attorneys argued that the value of life is absolute and cannot be taken away by any legal judgment, adding that there is no concrete research to prove that the death penalty actually impacts crime levels. 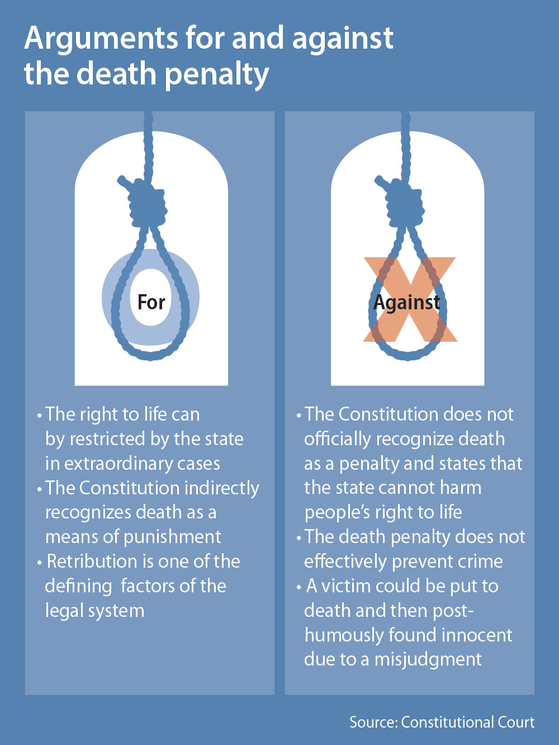 Where does the Ministry of Justice stand?

The Justice Ministry is in favor of the death penalty.

It argues that the right to life can be restricted by the state if it’s evident that the criminal is a threat to other peoples’ lives, and that innocent lives must come before the lives of a criminal.

“The death penalty prevents crime through the psychological effect it has on the general public and contributes to the public good by perpetually eradicating the source of evil,” wrote Minister of Justice Han Dong-hoon in a statement for the hearing.

“It is also the ultimate expression of justice for a criminal, who inflicts upon society a crime severely harmful to the public and humanity, to be made to pay for their wrongdoings when taking into account that the essence of punishment lies in retribution.”

The ministry also takes the example of abortion, which was made legal three years ago, as evidence that the state can legally restrict the right to life. 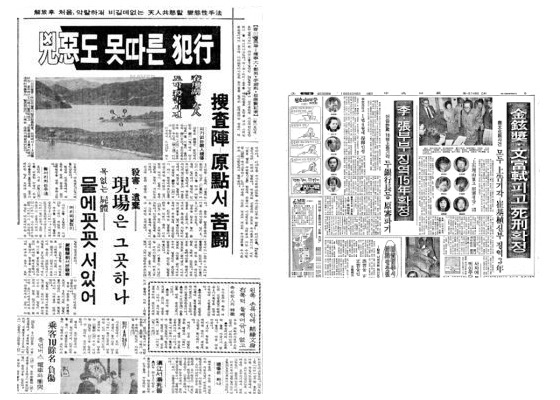 
What other arguments were made?

While many of the questions posed by the two sides are conceptual and philosophical, there is one issue that can only be reviewed from a legal standpoint.

The two sides disagree on whether or not the Constitution acknowledges the death sentence in Korea, because there is no clause that clearly states the legality of capital punishment.

The fourth clause of Article 110 of the Constitution of the Republic of Korea states that military trials under an extraordinary martial law may not be appealed in a number of cases, “except in the case of a death sentence.”

The terms under which death sentences can be given out are laid out in the Criminal Act, but Article 110 is the only mention of the death sentence in Korea’s constitutional law.

Another debate will be on Article 37-2 of the Constitution, which reads, “The freedoms and rights of citizens may be restricted by Act only when necessary for national security, the maintenance of law and order or for public welfare. Even when such restrictions are imposed, no essential aspect of freedom or right shall be violated.”

So whether the death penalty goes against the “essential aspect of freedom” is another issue. 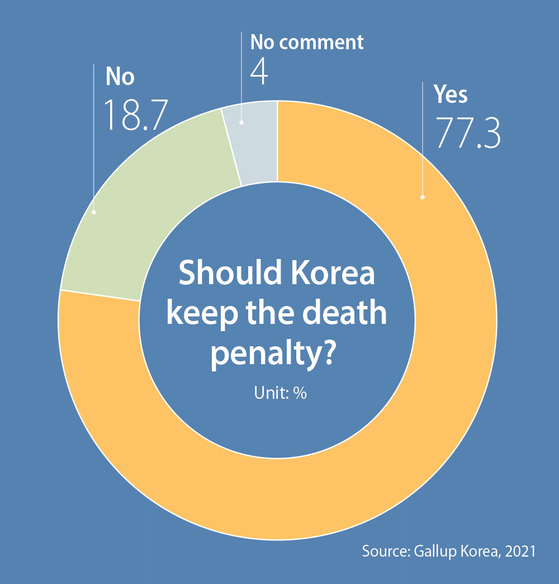 What’s the public consensus in Korea?

According to a Gallup Korea poll, the majority of Koreans are in favor of death penalty.

In the poll conducted in September last year, 77.3 percent of 1,007 interviewees said Korea should keep the death penalty, while 18.7 percent opposed the idea.

In fact, some people believe that Korea should not just have the death penalty, should start actually executing people again.

This is so much the case that during the Moon Jae-in administration, online petitions demanding the death of criminals were frequently uploaded on the Blue House website. A petition calling for the death of 36-year-old Koh Yu-jeong, convicted of killing her ex-husband, surpassed 200,000 signatures in 2019, prompting the Blue House to respond that the decision was up to the courts.

Some people argue that keeping criminals alive is both a waste of tax money and an unnecessary cruelty for the families of the victims.

“We cannot rule out that a certain part of contemporary criminal law includes retribution, and people still demand justice be done through retribution,” said Jang Young-soo, a professor at the Graduate School of Law at Korea University.


Does it mean that the death sentence is likely to stay?

It’s difficult to tell, because despite public opinion, Korea has been distancing itself from capital punishment over the last 20 years.

With no criminal actually put to death over the last two decades, Korea was acknowledged as a “de facto abolitionist nation” by Amnesty International in 2007. In 2020, the Korean government cast its first-ever vote in favor of a resolution for a moratorium on death penalties at the 75th session of the UN General Assembly.

The Constitutional Court has also been tilting toward abolishing the practice.

Five out of the nine judges who make up the current court — Chief Justice Yoo Nam-seok, Lee Seok-tae, Lee Eun-ae, Moon Hyung-bae, and Lee Mi-sun — explicitly said that the death penalty should either be abolished or actively reviewed during their confirmation hearings. 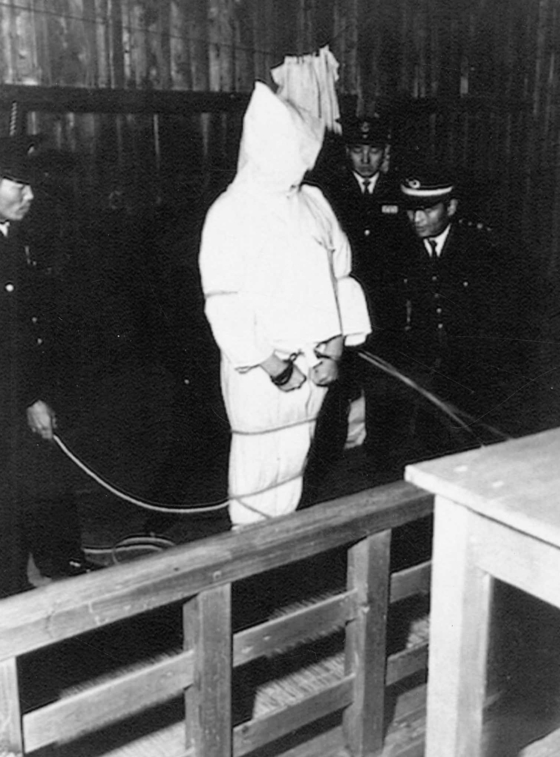 Lee Jeong-jae, a man convicted of committing violent crimes related to politics, is put to death in 1961. [JOONGANG ILBO]

When was the last person executed in Korea?

Twenty-three people were put to death on Dec. 30, 1997 at six different facilities across the country. Most were murderers, as well as serial rapists and arsonists.

No one has been put to death since then, but the courts have still been giving out death sentences. The biggest reason for these sentences not being carried out is that the contemporary legal system recognizes that no ruling can be absolute, meaning that an innocent person could be put to death due to a misjudgment.

In fact, 69.9 percent of judges acknowledged that they could have made a misjudgment in their rulings in a survey conducted in 2010 by the National Human Rights Commission of Korea.

And despite the consensus, experts and religious circles have been pushing for a ban on the death penalty. The fact that many countries are tilting away from the death penalty is another factor at hand.

The sudden break in executions from the beginning of 1998 is attributed to late President Kim Dae-jung, who was inaugurated in February that year. Kim, who had been sentenced to death himself during the Chun Doo Hwan military dictatorship, said during his inaugural speech that he would “work to protect the lives and assets of the people” and made it clear that he is against the death penalty during his time in office.

The justice ministry says that 923 people have been put to death since 1945 when the Korean government was first established, but the number does not include soldiers who were sentenced by a military court.

Among the 923, more than half were criminals charged with crimes such as murder and robbery, and around 250 were political offenders who committed “thought crimes,” accused of violating the National Security Act and Anti-Communist Act, predominantly during the authoritarian Syngman Rhee administration and the Park Chung Hee military dictatorship. 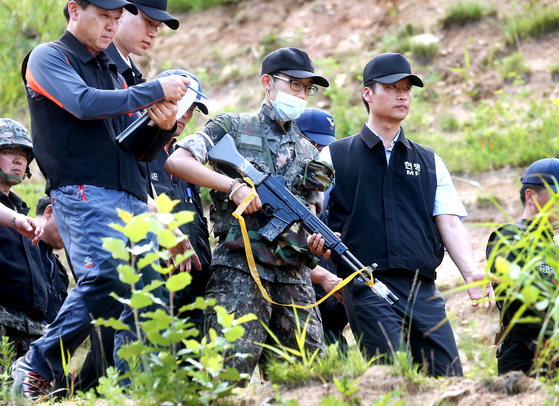 Lim Do-bin, an army sergeant who killed five soldiers and wounded seven others in a shooting spree, reenacts his actions with police in 2014. [JOINT PRESS CORPS]


What crimes can get you a death sentence in Korea?

Most prisoners on death row are murders, in particular serial killers, but the range of crimes that can earn the death penalty is quite diverse.

The article that got Yun almost sentenced to death was Article 250 of the Criminal Act.

“A person who kills one’s own or any lineal ascendant of one’s spouse shall be punished by death, imprisonment for life or for not less than seven years,” reads the act.

Other crimes include insurrection — the act of creating violence for the purpose of usurping the country — treason, arson, human trafficking and robbing, raping or killing another person after taking seize of a ship at sea.


What will happen to the inmates on death row if the death penalty is ruled unconstitutional?

Only five of the 59 death row inmates can appeal their sentence because only those sentenced after a 2010 Constitutional Court ruling could receive a retrial.

Of them are Lim, Oh Jong-geun, a fisherman who was charged for killing four young men and women, and three other murderers.

If the death penalty is ruled unconstitutional, the five inmates could be released if they appeal, because it would nullify their existing sentences.

But if it is found to be partially unconstitutional, as in the case with abortion, where the legal situation is unclear until the National Assembly put forward new regulations, then they will be kept in prison.

A date for Constitutional Court ruling has not yet been set.

[WHY] The highs and lows of Korea’s ppalli ppalli culture