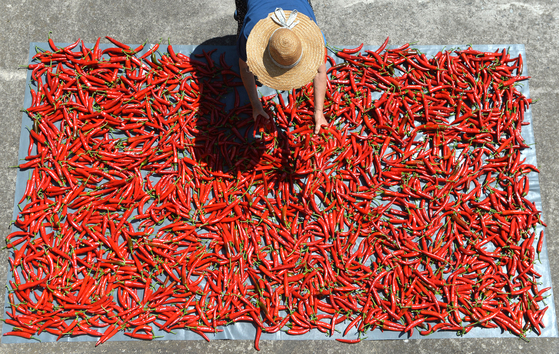 It may sound about as silly as dipping an apple in applesauce, but this is actually a common eating habit easily seen at Korean dinner tables.

Korea is home to many spicy dishes including kimchi, a traditional side dish made of pickled Nappa cabbages. The level of spiciness has evolved through the generations, with some young people even enjoying eating extremely spicy food despite the stomach pains afterward.

Singer Jimin of BTS is known to be a big fan of spicy Buldak Ramen, the super spicy instant noodles popular among young people. There are many videos of him eating the noodles, sweating and seemingly suffering, but he keeps eating.

When and why did Koreans’ craving for spicy food start — and by to what extent? 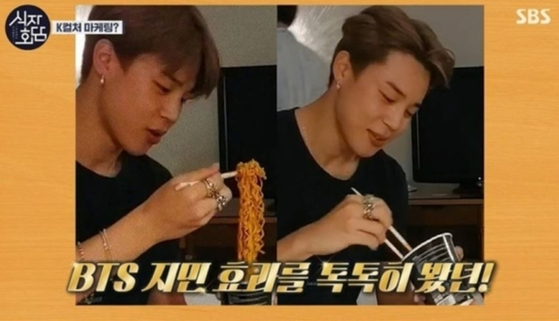 How much do Koreans love spicy food?

For anyone who has ever gone to a Korean restaurant, the answer is obvious.

Take for example what could be called three of the most well-known and popular Korean foods — kimchi, tteokbokki (stir-fried spicy rice cakes) and bibimbap (rice mixed with vegetables). In making kimchi or tteokbokki, chili peppers and chili powder are essential ingredients, while bibimbap is always served with chili pepper paste, called gochujang in Korean.

“What shocked me most when I first came to Korea was that all the menu options at restaurants were spicy,” said Allysa Williams, a 27-year-old graduate student from the U.S. at Seoul National University.

“One of my friends offered me Buldak Ramen once, and my tongue was literally numb,” Williams said. “I literally don’t understand how Koreans eat them so well all the time.”

Some 3.8 billion spicy ramen products were sold in Korea last year, according to the World Instant Noodles Association, which means they ate on average 73 packs per person.

How do Koreans have such a high tolerance for spicy food?

Simply put, Koreans handle spiciness well because they are used to it. Chili peppers have long been an indispensable ingredient in Korean food.

“Koreans are very used to the flavor of chili peppers, and that’s why we say Koreans have the DNA that loves spiciness.”

But that does not mean Korean food was spicy from the beginning. When chili peppers were first brought to Korea from Japan during the Imjin War (1592-98), they had more of a sweetness to them than spiciness.

It was around the 1960s, not long after the 1950-53 Korean War, when Koreans started to consume spicier chili peppers. Korea heavily expanded crop breeding after the war, and that was when farmers produced Korea’s spiciest cheongyang pepper, which is smaller than general peppers but known for packing a punch of spiciness.

“As a country that developed very rapidly, Korea was very quick to bring in hefty amounts of overseas products,” said Joo Young-ha, a professor of ethnology at the Academy of Korean Studies. “The chili pepper is one such prime example, and Korea imported lots of peppers that are high in capsaicin from foreign countries such as Latin America.” Capsaicin is what gives chili peppers their burning spicy sensation. 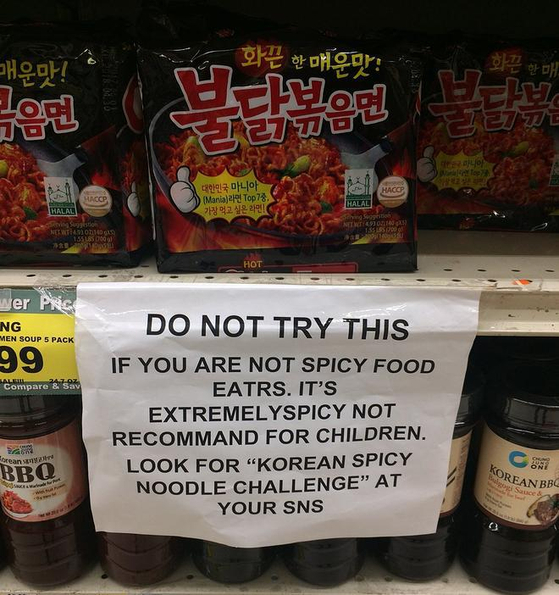 So when did Korean food get spicier?

No one knows the exact time. But history tells us that Koreans’ cravings for spicy food dramatically surged whenever life got tough due to economic slumps, including the recent pandemic.

Foods like tteokbokki and jjambbong (a spicy noodle soup with seafood) started to boom in Korea right after the 1997 Asian financial crisis.

In 1998, the sales of Nongshim’s Shin Ramyun jumped 20 percent on year. Shin Ramyun was one of the representative spicy ramyeon products in Korea at the time.

Buldak Ramen, even spicier than Shin Ramyun, was introduced in 2012, at the peak of the financial crisis in Europe.

“The more stressed people are, the more they crave spicy food in this very competitive society, though we can’t really generalize this as many still don’t agree that spicy food relieves stress,” Lee said.

This phenomenon would also explain the recent trend of extremely hot food particularly among young people, a generation that has been said to be living in one of the toughest times, characterized by a slowing economy and high unemployment rate.

Many local YouTubers have filmed themselves trying Buldak Ramen and shared the videos under the tag “Spicy Noodle Challenge.”

YouTuber Korean Englishman uploaded a video of him trying Buldak Ramen eight years ago, which has since racked up 11 million views worldwide.

“Videos of people eating extremely spicy food get a lot of views on social media channels,” said Lee. “Young people in the MZ Generation receive vicarious satisfaction through the videos and join the movement.”

This kind of trend led to neologisms that are usually used online like mukbang, which refers to videos that feature a person eating food and talking to viewers, and maepbusim. Maepbusim is a portmanteau of the Korean words for spiciness and self-esteem, referring to the pride someone feels when they can tolerate spiciness. 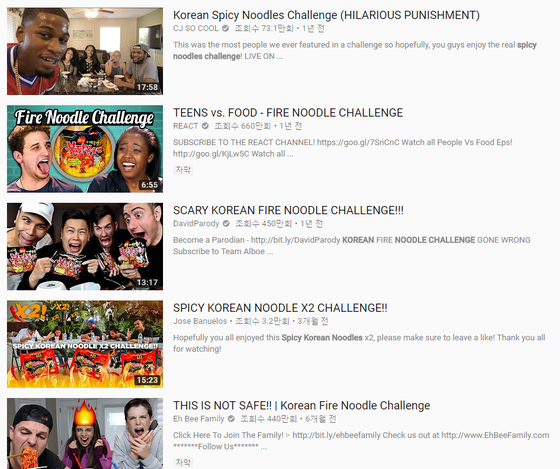 Experts say the perceived pain and burning sensation of the spiciness stimulates the cranial nerve to help relieve stress and feel refreshed.

“When we eat spicy food, the mucous membrane of the mouth is stimulated, and the sense of pain triggers our brain to secrete endorphins,” said Chung Hae-kyung, a food and nutrition professor at Hoseo University.

“It also helps the body sweat and emit temperature, and this is when people feel like they are being calmed down and feel relaxed,” Chung said. “Under that logic, sales of spicy food are higher on Monday than on any other day of the week.”

In a recent survey by the Seoul Metropolitan Government on 10,000 Koreans, the No. 1 comfort food during the pandemic was tteokbokki, followed by fried chicken and kimchi jjigae (stew).

“I really feel that my stress gets so much better when I eat spicy food,” 26-year-old Kang, a resident of Suwon, Gyeonggi, said. “Whenever I get stressed from my work or from personal reasons, I always feel like eating spicy food.”

“Sometimes it makes my stomach hurt, but I can’t help it.”

Is Korea the only nation that loves spicy food?

Chili peppers originated in Latin American countries, and other varieties of chili peppers in those regions are still much spicier than Korea’s.

Mexico harvests over 100 different varieties of chili peppers. The habanero pepper is the spiciest of all, which is 50 times spicier than Korea’s cheongyang pepper, based on the Scoville scale, which measures a chili pepper’s pungency.

Habanero is a common ingredient in Mexican dishes, including salsa.

Another example of spicy food elsewhere in the world would be Chinese malatang, a type of hot spicy soup commonly eaten as street food in Sichuan region. The particular spice is known to have a numbing effect.

The Prik Khi Nu pepper from Thailand is about three or four times spicier than Korea’s cheongyang pepper. Called the bird’s eye chili pepper due to its appearance, it is one of the main ingredients of the popular Thai soup tom yun goong.

“Korea’s spiciness is quite different from those as the conditions of the territories are different,” Prof. Chung said. “Korean peppers are spicy but also have a hint of sweetness at the same time.” 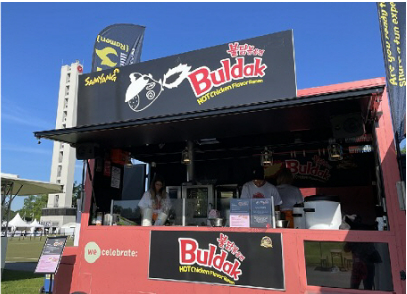 Are the Korean spicy dishes only popular locally?


Korean spicy food is gaining worldwide attention thanks to the growing popularity of K-pop and K-culture.

Cumulative overseas sales of Buldak Ramen are expected to reach $400 million this year, only five years after it surpassed $100 million. Samyang Foods sells the product in over 90 countries around the world.

A total of 4 billion packs have been sold since its introduction in 2012, 3 billion of which were sold outside of Korea.

Sales of the Samyang Ramen again surged after appearing in the hit Netflix Korea series “Squid Game” in 2021.

Nongshim’s Shin Ramyun was sold more overseas than in Korea in 2021.

The product is still ranked within the top 10. 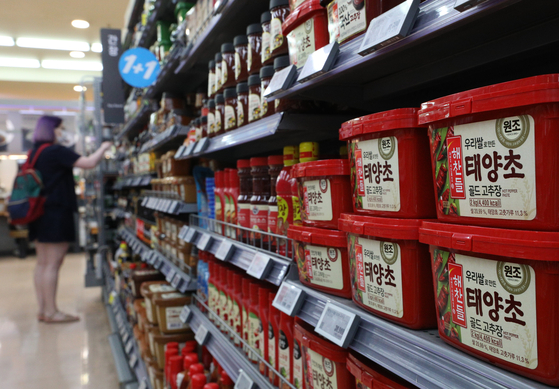 Various gochujang products are displayed at a discount mart in Seoul on June 29. [NEWS1]

What are some more unique spicy Korean products?

With more and more people craving spiciness, Korean food and confectionery companies are adding spice to products that had never before been spicy.

Binggrae also released a spicy version of Samanco, which is a fish-shaped wafer filled with vanilla ice cream and sweet red bean paste. The new version has Buldak sauce added to the ice cream.

Namyang Dairy Products in 2017 introduced a spicy milk while Krispy Kreme came up with a spicy flavor of donuts, which were only available in Korea.

“The spiciness now goes beyond taste and has expanded to visuals,” researcher Lee said. “It has now become a social phenomenon that not only spice fanatics but general people, even foreigners, enjoy” Korea’s spicy food.

“This kind of trend spreads and has now become a new food culture.”