[WHY] When it comes to covering up, more is more for Korean beachgoers

[WHY] When it comes to covering up, more is more for Korean beachgoers 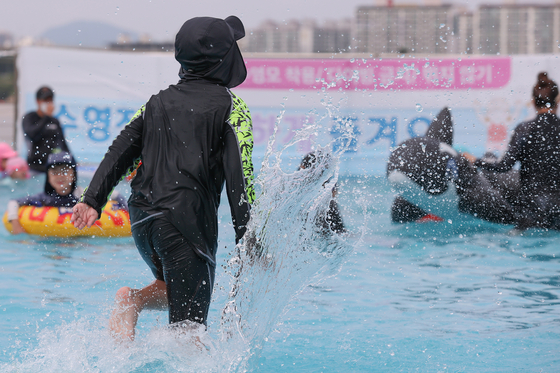 
It’s common sense to show some skin at the beach — whether it’s to catch some sun or take a dip in the ocean. However, in Korea, locals take a much different approach.

Visit a beach or water park in the country and there will be a significant amount of people who have completely covered themselves up with rash guards, or fitted spandex shirts typically worn while surfing, or maybe even a casual shirt and shorts. While there are people who do wear just bikinis or swimming trunks, the number is conspicuously lower.

Since the late 2010s, rash guards have surged in popularity in Korea, to the point that it appeared anyone hitting the beach was sporting some.

Though the trend seems to have dwindled slightly over the years with bikinis or one-piece swimsuits starting to increase in popularity, rash guards still remain a preferred option as seen by related sales data. 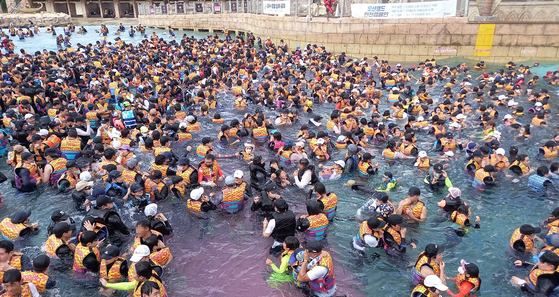 Visitors in the waters at Vivaldi Park Ocean World in Gangwon on Aug. 1, 2022. [YONHAP]


According to Musinsa, an online fashion retail site operator, rash guards sold four times more than bikinis in July this year. Sales of rash guard shirts in that month were also twice more than sales recorded in the same month last year.

Data from another local fashion retail platform W Concept shows that sales of rash guards and one-piece swimsuits increased by eight-fold in the first half of June this year, compared to a year before.

Who is buying all these rash guards and why? 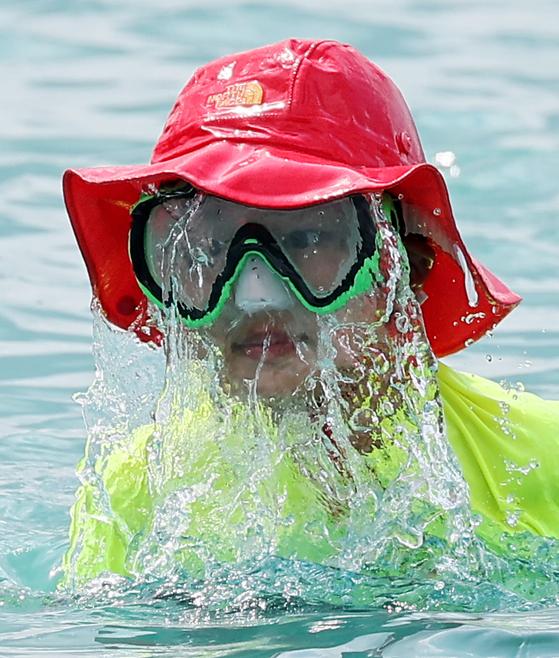 Preferences for types of swimsuits vary by age and these days, rash guards are mainly sported by mothers or children.

An Hyun-ju, a 50-year-old mother of two, says that she feels more comfortable wearing rash guards rather than swimsuits because the garment covers areas of her body she does not want to expose, such as her stomach. An says she does not feel as confident about wearing revealing clothes since giving birth to her first child.

“They’re also practical because they guard you from the scorching sun,” An said. “I won’t have to get stressed about getting tan lines all over my body after a day at the beach!”

“There’s a so-called phenomenon among hotel swimming pools,” said Han Sun-mi, underwear designer and CEO of Han’s Underwear Design Studio, which also specializes in designing swimsuits. “During the daytime, there are more families playing in the pools, which is why you will probably see more rash guards than bikinis and other swimsuits. But as the day fades into night, the pools switch to young couples, who favor bikinis and more revealing swimsuits, and it becomes a club or party-like scene.” 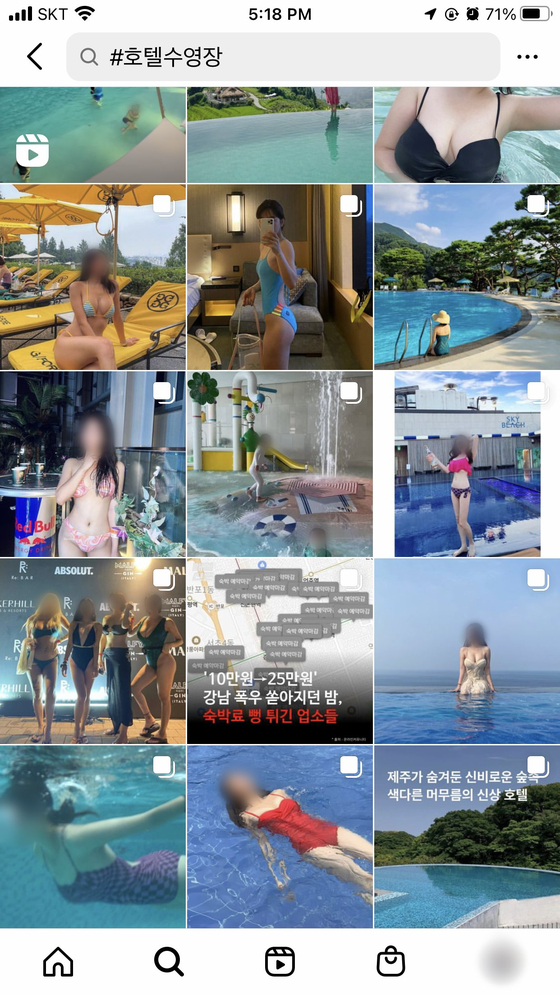 When searching with the hashtag ″hotel swimming pool″ on Instagram, a majority of the results show people in their 20s or 30s wearing revealing swimsuits [SCREEN CAPTURE]

For women in their 20s and 30s, the situation is a little different. They tend to enjoy more freedom in choosing their swimming outfits depending on the time, place and occasion — meaning they wear bikinis but also keep rash guards as an option in case they go on big group trips or family gatherings or simply to protect their skin from the sun.

Ju Eun-ha, a 25-year-old who lives in Ansan, Gyeonggi, says that she prefers to wear bikinis because the look is “sexier.” However, her swimming outfits do change according to where she is.

“It’s uncomfortable to wear bikinis or other swimsuits with spaghetti straps when I go on rides at water parks or inflatable assault courses,” Ju said. “In these places, I sometimes feel pressure about other people looking at my body when I wear bikinis, so I usually wear rash guards. But when I go to the swimming pool or the beach, I like to wear bikinis because nowadays they’re filled with people who wear the same thing, so I don’t feel as self-conscious.”

“There’s a recurring swimsuit-related keyword in the fashion industry, and it’s ‘hotel swimsuits,’” said Ju Kyeong-a, CEO of Insfit Lingerie Studio. “People who go to hotel swimming pools don’t go there to swim; they go to take pictures and post them to social media. Young people have different types of swimsuits for all occasions now — it’s all for the camera.”

But for those on the insecure side, rash guards offer the perfect solution.

“It really bothers me how I have to care about people looking at my body when I wear a bikini,” 25-year-old Seoul resident Lee Jung-joo said. “I personally think people who are more confident about the way their bodies look wear bikinis more, but I don’t feel the same way about my own body. And besides, on the beach, rash guards help protect my skin from tanning, and I like their design more than bikinis.” 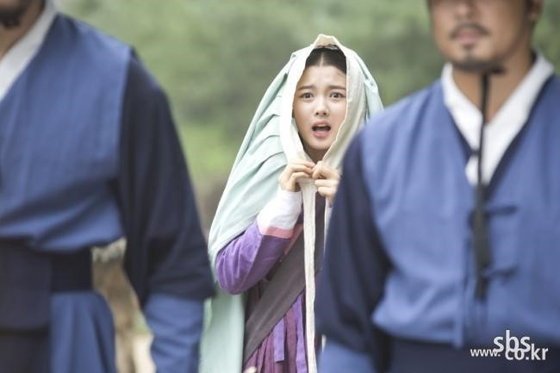 In SBS’s historical drama series ″Secret Door″ (2014), actor Kim Yoo-jung is shown here covering her head with a dress as it was the custom during the Joseon Dynasty (1392-1910). [SBS]

While there are countless reasons Koreans are so insistent on covering up, the biggest factor can be attributed to how seriously they take their skin care.

“Korean culture has long been in favor of pale skin, which is why people avoid staying in the sun for too long,” said Kwak Geum-joo, a psychology professor at Seoul National University.

This is influenced by Confucianism which was prevalent during the Joseon Dynasty (1392-1910), as the ideology stressed the importance of looking neat and tidy according to social status. Yangban, or aristocrats from that era, had strict rules for the clothes they wore, like wearing layer upon layer or hiding their feet with closed-toe shoes.

People who wore revealing clothes or had darker skin were usually lower ranking. Women in particular weren’t allowed to live as freely as men — they were unable to go outdoors whenever they wanted to, and if they did, they had to cover their faces with their dress: Hiding from the sun was always something that was considered normal. 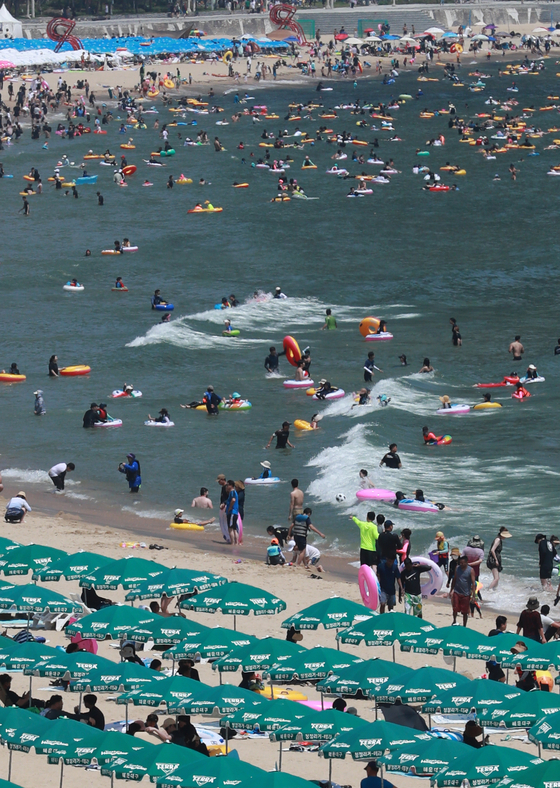 
“It’s a different phenomenon from other countries, like the Mediterranean, where they prefer tanned skin because they think it creates a healthier image and aren’t as reluctant to stay exposed in the sun,” Prof. Kwak said.

“Another reason Koreans have long disliked to show off their bodies can be attributed to collectivism. People care way too much about what others think, which links to feeling unsatisfied and lacking confidence about their appearances. Lookism is one notion that has always dominated Korean society — people ceaselessly crave for their own bodies to be ‘perfect’ like those of celebrities — and it’s the opposite from western countries, where the people there just relatively care less about what their body shape is.” 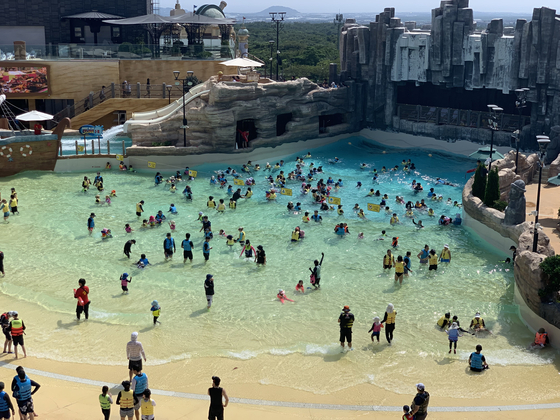 
Are rash guards popular in other countries?

The basic answer is no; Korea is the only country in the world that sees non-surfers wear rash guards frequently near the water for aesthetic reasons, CEOs Han and Ju agreed.

Currently, however, Han says that rash guards have been making an appearance in China, with the rise in popularity of Korean culture. Local rash guard brand Barrel said in 2019 that it would expand its business to China. 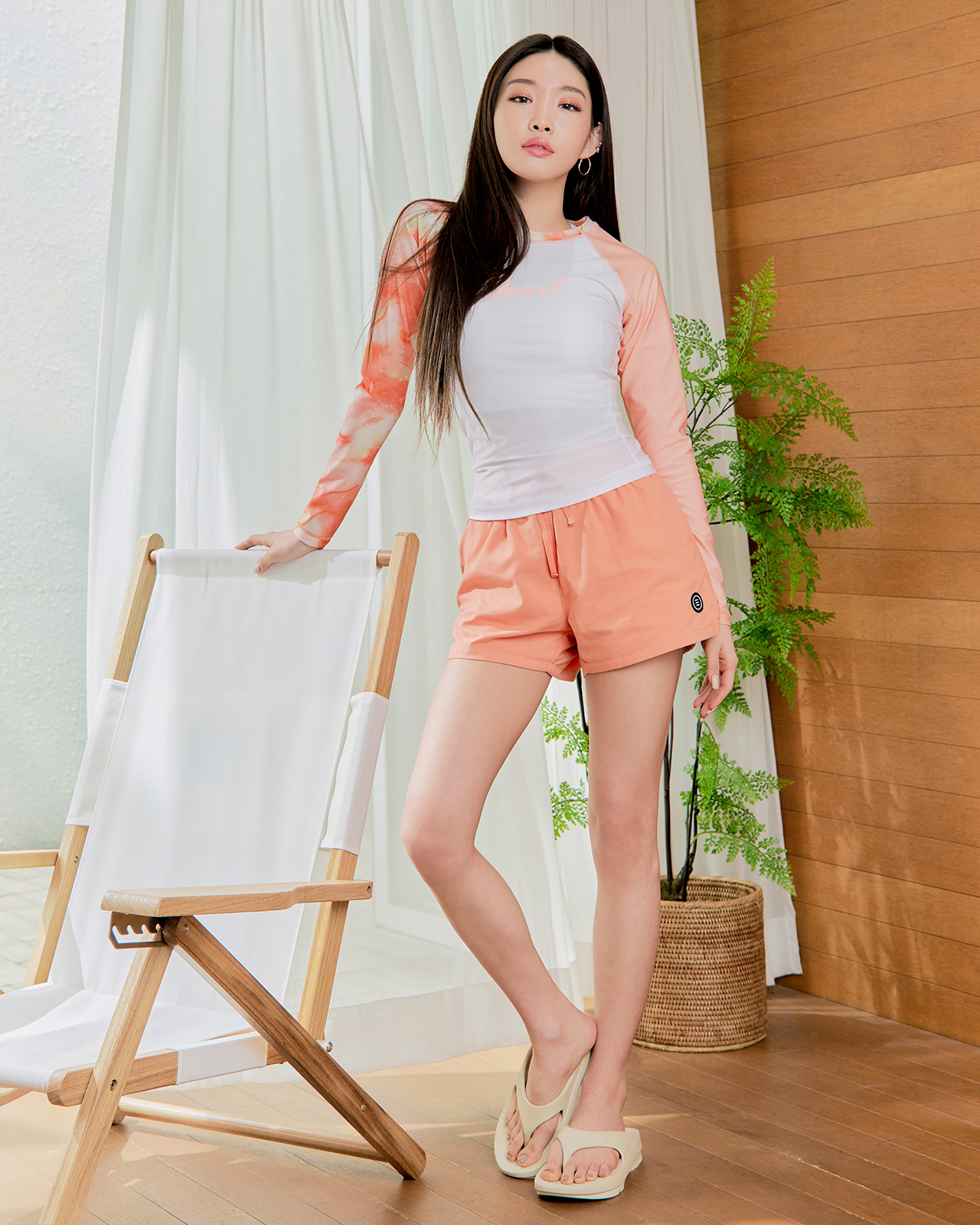 
But the trend is unlikely to take off internationally anytime soon as in many European countries, rash guards are reserved for surfers only.

A designer at Han’s Underwear Design Studio said that on a previous trip to Italy, she saw signs in which the hotel swimming pools actually prohibited rash guards because they are deemed unsuitable for such areas.


“In general, no one wears rash guards here unless you’re a surfer, as opposed to Korea,” said Yoon, a 24-year-old office worker who lives in London, who asked to be referred to by his last name. “Everyone wears swimsuits. I don’t think I’ve ever seen regular beachgoers wear rash guards, nor have I seen stores sell them in London. Europeans aren’t as conscious about showing their skin.”

“It wouldn’t be an exaggeration to say that everyone who wears rash guards on the beaches of Southeast Asian countries are actually all Koreans who are on vacation,” CEO Ju added. 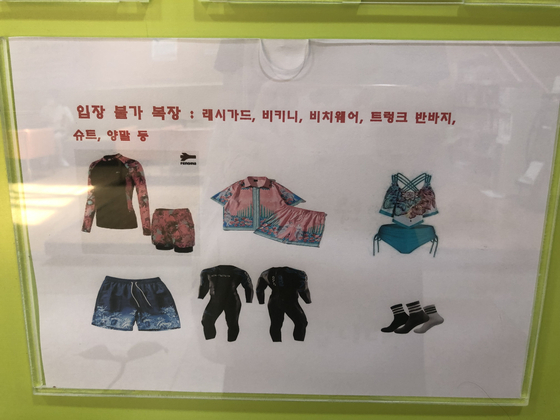 Despite the popularity of rash guards in Korea, there is one place where people don’t, or perhaps can’t, wear them.

These facilities tend to have strict rules when it comes to what can be worn and dress codes usually include athletic swimsuits and swimming caps.

According to a receptionist at the West Woman’s Community Center in Seo District, Incheon, which regularly offers swimming lessons, the center used to allow rash guards but banned them starting this year.

“There were a few people who wore them in the indoor pool, but most of them would change to swimming suits because they are uncomfortable when practicing swimming techniques,” the receptionist said.

As rash guards are usually resistant to water, they are more inconvenient when doing larger hand strokes or other movements. 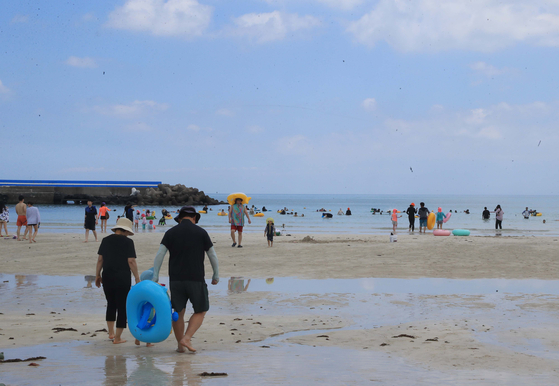 
Are rash guards here to stay?

Swimsuit trends tend to change every 10 or so years. In Korea, the current style can be divided into three major looks — T-shirts and shorts, rash guards and one-piece swimsuits.

“Bikinis haven’t become that popularized until recently. Up until the 1990s or early 2000s, people usually wore T-shirts and shorts at the beach because there wasn’t really a trend for swimsuits,” said Han. “Rash guards were popular in the 2010s, and since around 2018, one-piece swimsuits are being opted for, along with monokinis. Of course, this being among the younger generation.”

“The ‘90s was indeed a more conservative time than now,” said CEO Ju. “Although people did wear bathing suits, the designs had much more coverage — as in larger cups or thicker seams.”

One-piece swimsuits and monokinis are slightly different, though they they both usually cover the torso. Monokinis, first invented by Austrian-American fashion designer Rudi Gernreich (1922-1985), were initially topless. However, due to being deemed a bit scandalous for the general public, the design has changed back to covering the breasts, except now it has a lower neckline and may be more revealing than a regular one-piece swimsuit. 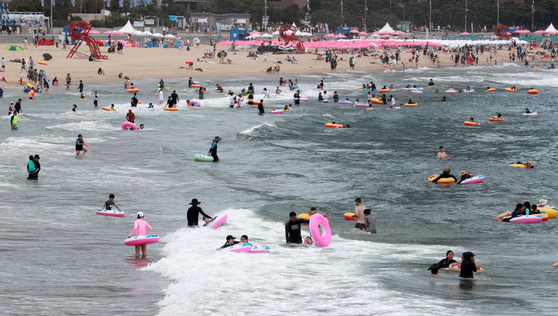 People vacation in Haeundae beach in Busan on Aug. 9, 2022. Note that most are wearing rash guards. [YONHAP]

“People who have a bigger bust or are taller tend to prefer bikinis more,” Han said. “Wearing one-piece swimsuits may feel stuffier or too tight-fitting for people with these body types.”

“Honestly, with people traveling overseas for vacations and wanting to feel and look good, younger Koreans’ mindsets are changing; they are starting to think that showing some skin isn’t that big of a deal, like in western countries,” Ju said, “which is why I think swimsuit trends will continue to get much freer.”