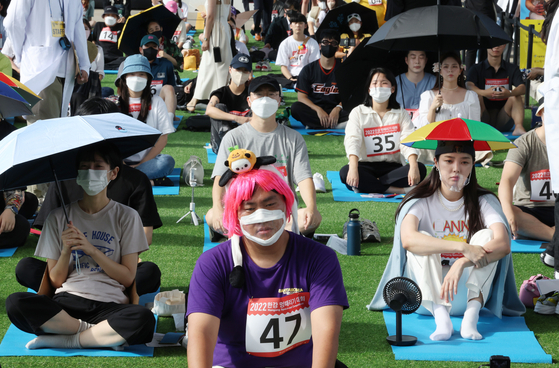 Partipants, including actor Um Hyeon-kyung on the right, zone out during the “2022 Han River Space-Out Competition” held on Sept. 18 at the Jamsugyo Bridge, located directly under Banpo Bridge which connects central Seoul’s Yongsan District and southern Seoul’s Seocho District. [YONHAP]


The winner of the “2022 Han River Space-Out Competition” held on Sunday shared that his secret behind zoning out was “imagining that I was watching a Hanwha game.”

The man in his 30s, a fan of the professional baseball team Hanwha Eagles, revealed his tactic to local news outlets after completing the 90-minute competition and being named the winner. The team is often mocked among Korean baseball fans as it has ranked low among domestic baseball leagues for over a decade.

“I’ve been a Hanwha fan for 10 years, so I just naturally zoned out [at this competition] like how I zone out at Hanwha games.”

The competition requires participants to sit on a grass lawn and zone out. Participants are required to say nothing, do nothing and stay zoned out for the entire duration. The event’s organizers measure each participant’s heart rate every 15 minutes and have people vote on who is the most spaced out. A stable heart rate or a steady decrease is considered to be a good performance. 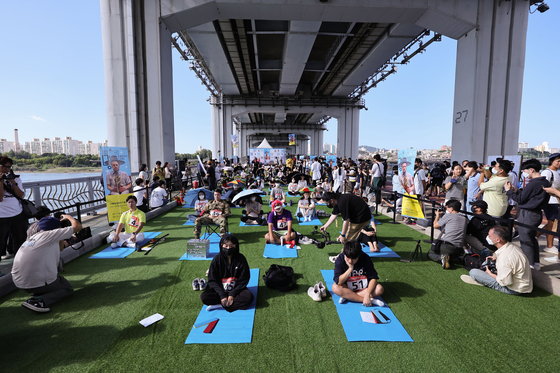 Participants zone out during the “2022 Han River Space-Out Competition” on Sept. 18. [YONHAP]

“I can zone out for 24 hours,” said actor Um Hyeon-kyung who participated in Sunday’s event. “My strategy is to have a high heart rate at the beginning and slowly reduce it.”

The final winner was determined based on their heart rate and citizens’ votes.

The “Space-Out Competition” started in 2016 in order to break the notion that not doing anything productive is a waste of time. This year’s competition was originally scheduled for Sept. 4 but was postponed due to Typhoon Hinnamnor.