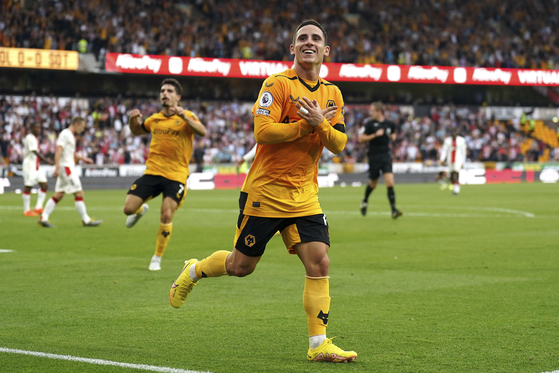 Hwang, who has been struggling with a terrible run of form for most of this year, starting the game on the bench, missing out on all the action as Daniel Podence scored the sole goal of the game in injury time at the end of the first half.

When Hwang eventually did come on in the 82nd minute, it was as Podence’s replacement. His 10 minutes on the pitch was largely uneventful, with the match all but decided before the second half even began.

Hwang has been struggling in front of goal with the midlands club. He has failed to score for Wolves in the last 19 games, 18 of which were in the Premier League. He last found the back of the net on Feb. 24, scoring his fifth goal of his debut Premier League season against Arsenal.

Hwang’s ongoing struggle has seen him gradually slip from starting XI to the back of the bench, with manager Bruno Lage not even calling on the Korean as a substitute during last week’s 0-0 draw with Bournemouth.

That dry spell had made Hwang look like potential transfer window fodder, with rumors connecting him to both Leeds, where he could have reunited with former manager Jesse Marsch, Everton and Roma. Wolves reportedly turned down a £17 million ($20 million) offer for Hwang before the window closed last week, with Lage maintaining that he is a crucial member of the team.

Lage says that Hwang’s goalless run is in part because his preseason training was interrupted while he completed basic training in lieu of mandatory military service. If that is the case, Lage could be focusing on keeping Hwang off the pitch and running him through a more intensive training program during the week, but the Korean midfielder will have to find his groove soon if he wants to regain his spot in the starting XI.

Wolves will be back in action next Saturday as they face Liverpool on the road at Anfield.

Korea lands at No. 26 on World Cup power ranking