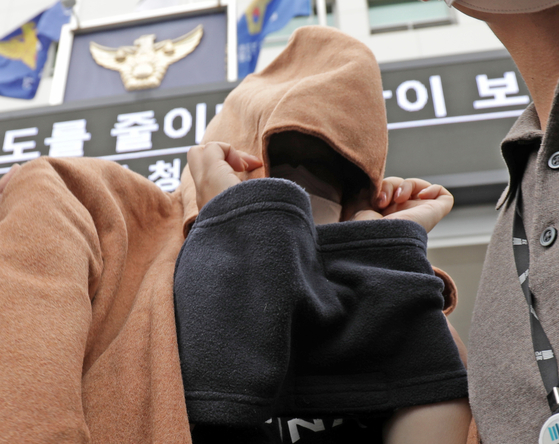 A woman believed to be the mother of two children whose remains were found in suitcases in New Zealand last month was nabbed in Ulsan early Thursday morning.

Korean police said the 42-year-old woman, who was born in Korea but has New Zealand citizenship, was found hiding in an apartment in Ulsan, some 300 kilometers (186 miles) southeast of Seoul, at around 1 a.m.

She was arrested on two charges of murder. Police said they were able to track the suspect down after receiving a tipoff from one of her acquaintances.

The suspect did not resist arrest, officers said.

While being transported to Seoul, reporters managed to ask the suspect questions and she denied killing the children, according to reports. Ulsan police handed her over to the Seoul Central District Prosecutors’ Office on Thursday, where she will stay in custody.

The Ministry of Justice will soon decide whether to extradite the woman to New Zealand, as requested by the country.

The case made headlines last month in both Korea and New Zealand when New Zealand police announced that a family in South Auckland discovered human remains in suitcases they bought on an online auction.

New Zealand police said they believe the remains were from two children between the ages of five and 10 at the time of their deaths.

Police suspect they died three to four years ago.

The family who bought the suitcases was not named as suspects in the murders. But the children’s mother was, though a motive hasn’t been described. Her husband is known to have died of a disease in New Zealand in late 2017.

New Zealand police believed the mother was hiding in Korea, where she was born. They asked Korean authorities for help in finding her, and under a treaty between New Zealand, requested her extradition to New Zealand to face charges.

“To have someone in custody overseas within such a short period of time has all been down to the assistance of the Korean authorities and the coordination of our NZ [New Zealand] Police Interpol staff,” New Zealand Detective Inspector Tofilau Fa’amanuia Vaaelua said in a statement on Thursday.

The suspect is believed to have arrived in Korea in 2018, after the alleged murders, and stayed in the country since.