Yoon gov’t gets going on diplomacy on North with U.S., China

Yoon gov’t gets going on diplomacy on North with U.S., China 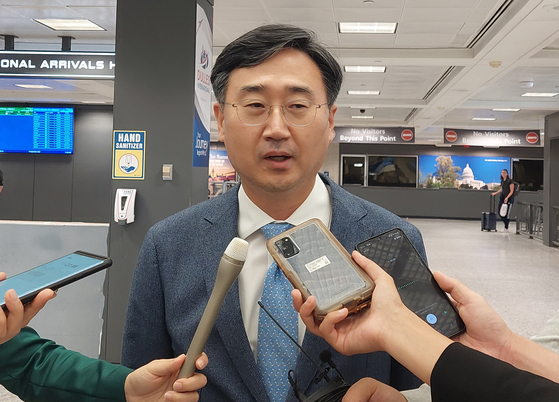 
The Yoon Suk-yeol administration is engaging in a series of diplomatic efforts this month that could focus on North Korean nuclear issues with key countries including the United States, China and Japan.

The EDSCG, a high-level consultative mechanism established in October 2016, last met in January 2018. President Yoon and U.S. President Joe Biden agreed to reconvene the EDSCG during a bilateral summit in Seoul in May.

Pyongyang’s new nuclear strike law and continued indications of preparations for a seventh nuclear test are expected to be discussed.

Last Thursday, the Supreme People’s Assembly, North Korea’s rubber-stamp parliament, adopted a law stipulating that Pyongyang will “automatically and immediately” launch a nuclear strike to attack the origin of any provocation if the “command and control system” of its nuclear forces is in danger of an attack, an apparent reference to North Korean leader Kim Jong-un.

“We will confirm the United States’ commitment to strengthened extended deterrence and discuss concrete steps to enhance its implementation,” Vice Defense Minister Shin told reporters after arriving at Dulles International Airport Monday for the EDSCG meeting. “We will focus on building confidence to reassure the public and that the U.S. extended deterrence will actually work well in the case North Korea conducts a nuclear test.”

He continued, “In the broader context, there has been progress in discussions that are underway on how the South and the United States will share assessments and countermeasures on North Korean threats and specifically how we will develop extended deterrence to reassure the public.”

In a briefing Tuesday, Col. Moon Hong-sik, deputy spokesman for Seoul’s Ministry of National Defense, warned that if North Korea attempts to use nuclear weapons, the regime would “face an overwhelming response from the South Korea-U.S. alliance” and “enter a path of self-destruction.”

White House Press Secretary Karine Jean-Pierre stressed in a briefing last Thursday that the United States remains “fully committed to the defense of the Republic of Korea, using the full range of defense capabilities.”

She told reporters, “We have made clear: We have no hostile intent toward the DPRK,” using the acronym for the North’s official name, the Democratic People’s Republic of Korea.

However, she added that the United States continues to seek diplomacy and is “prepared to meet without preconditions,” while noting that the North has yet to respond.

Li Zhanshu, chairman of China’s Standing Committee of the National People’s Congress, is expected to visit Seoul on the invitation of National Assembly Speaker Kim Jin-pyo from Thursday to Saturday.

Li will lead a 66-member delegation including four ministers and three vice ministers.

He is expected to meet with Yoon at the Yongsan presidential office on Friday.

This will mark the beginning of Yoon’s diplomacy with China. The two could discuss a possible visit by Chinese President Xi Jinping to Korea as the two countries commemorate the 30th anniversary of the establishment of diplomatic ties this year.

Li’s visit also comes as Seoul seems to be tilting more to Washington amid the intensifying U.S.-China rivalry since the launch of the new administration. It could be a chance for talks about cooperation on North Korean denuclearization and other bilateral and regional issues including assuaging China’s concerns about the U.S.-led Terminal High Altitude Area Defense (Thaad) system.

Yoon will then kick off a weeklong overseas trip that takes him to Britain, the United States and Canada from Sunday to Sept 24.

He is scheduled to attend the funeral of Queen Elizabeth II in London on Sunday.

Next Tuesday, Yoon will deliver a speech at the UN General Assembly in New York for the first time. The theme of this year’s assembly is “A watershed moment: transformative solutions to interlocking challenges.”

National Security Adviser Kim Sung-han said in a briefing Monday that Yoon will “present the role of South Korea as a global leader that substantively contributes to the resolution of international issues and takes the lead in establishing an international order based on universal values.”

Yoon’s speech is also expected to include his so-called “audacious initiative” to support North Korea’s economy if Pyongyang takes substantive steps toward denuclearization, a policy he outlined in a Liberation Day address last month.

In New York, Yoon could possibly hold a first summit with Japanese Prime Minister Fumio Kishida. Yoon and Kishida had brief encounters on the sidelines of the NATO summit in Madrid, Spain, in late June, but the two have yet to sit down for an official bilateral summit.

Yoon could also have a chance to meet with U.S. President Biden on the sidelines of the UN General Assembly.

Yoon will then head to Canada for a summit with Prime Minister Justin Trudeau.

On Sept. 27, Korean Prime Minister Han Duck-soo is set to attend a state funeral for former Japanese Prime Minister Shinzo Abe, who was assassinated in July. This could be an opportunity to discuss trilateral cooperation with the United States on North Korean denuclearization as well as other pending bilateral issues.

Later in the month, U.S. Vice President Kamala Harris will visit Seoul and meet with Yoon on Sept. 29 to discuss the bilateral alliance, North Korea and other issues.