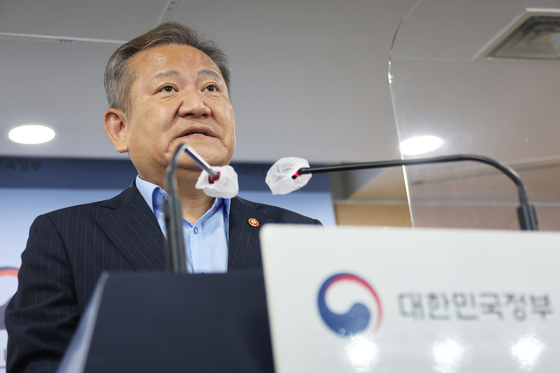 Minister of the Interior and Safety Lee Sang-min announces the administration’s plan to reorganize the government on Thursday during a press briefing in Seoul. [YONHAP]

The Yoon Suk-yeol administration said it would ask the National Assembly to abolish the Gender Ministry, fulfilling a controversial campaign pledge.

Under a reorganization plan that was finalized this week and announced in a press conference Thursday by Minister of the Interior and Safety Lee Sang-min, the Gender Ministry will be scrapped and some of its functions given to a new organization within the Ministry of Health and Welfare.

The head of that new organization, said Lee, will be an official whose rank will be “in between those of a minister and vice minister,” similar to the rank of the minister for trade in the Ministry of Trade, Industry and Energy.

Currently, the head of the Gender Ministry is a minister and a full Cabinet member.

According to the plan, the chief of the new organization under the Health Ministry won’t be a Cabinet member but will be allowed to attend weekly Cabinet meetings with Yoon.

The Gender Ministry’s work on female employment will be transferred to the Ministry of Employment and Labor, Lee added.

Other changes are the upgrading of the minister of patriots and veterans affairs to a Cabinet position, which would give the minister more negotiation power during the weekly Cabinet meetings and allow him or her to issue ministerial ordinances.

The Yoon administration also hopes to launch a new government agency handling Korean expats, essentially by transferring relevant work from the Ministry of Foreign Affairs and the Overseas Koreans Foundation.

Lee said talks were also underway to establish an agency on aerospace and another on immigration, with specifics for each expected to be announced later this year.

But whether the administration’s reorganization plan will sail through remains murky.

The changes require a revision to the Government Organization Act, which would require the consent of the National Assembly, which is controlled by the Democratic Party (DP).

Lawmakers from the liberal DP have welcomed most changes but vehemently oppose the abolishment of the Gender Ministry and accuse the Yoon government of using the issue to score political points with young male voters.

Yoon’s approval rating dipped to 24 percent in the latest Gallup Korea poll announced in the last week of September, down from 33 percent two weeks earlier. By this point, experts say that support from any part of the public sector would help Yoon from hitting rock bottom.

The DP this week expressed “grave concerns” about the abolishment plan, saying that relegating the head of a government body overseeing gender equality to any rank below that of a minister could undermine the group’s negotiating power when discussing policies related to sexual crimes.

Several women’s groups have also voiced opposition to the plan, saying that scrapping the ministry would lead to further marginalization of women in society.