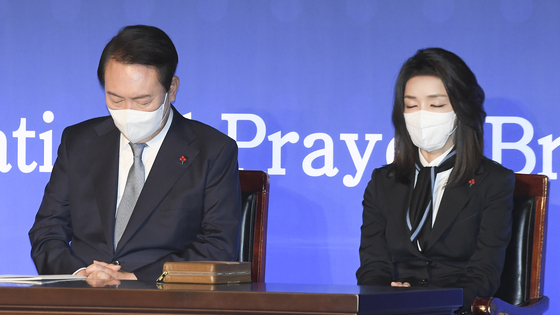 
President Yoon Suk-yeol attended a national prayer breakfast on Monday and renewed his pledge to defend liberty and democracy.

Yoon attended the Christian prayer meeting with first lady Kim Keon-hee and thanked the Korean Church for its dedication to the nation.

The national prayer breakfast was launched in 1966 and has invited the president and the first lady to its gatherings once a year.

“The internal and external environment surrounding us is not easy, but we are working to go forward into a better future,” Yoon said during the service. “I will build a nation where the spirit of freedom and solidarity lives and breathes, and where the law and principle stand upright.”

Yoon said he believes doing so is the way to look after the socially vulnerable and overcome the current multilayered crisis.

“I remember the resolution I made when I first started politics, the calling to defend liberty and democracy, here at this place,” he said. “I believe upholding that calling is not different from practicing the teachings of Jesus.”

The presidential office said the attendees addressed various social issues, including ending the Covid-19 pandemic, the Itaewon tragedy, the economic and security crisis, and the low birth rate and aging population, and prayed for true comfort and new hope to the nation.

After the service, Yoon and the first lady had breakfast with church leaders and members and listened to the Christian community’s opinions on social issues, it said.