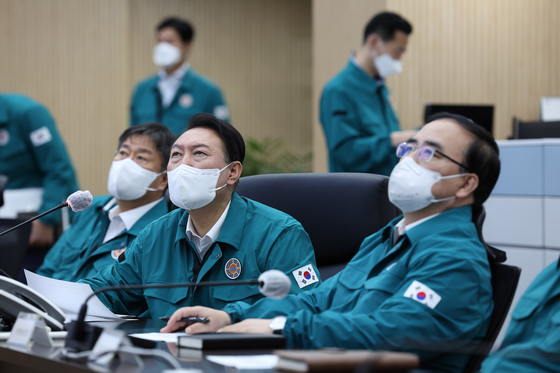 
As Typhoon Hinnamnor made landfall and continued out into the East Sea, President Yoon Suk-yeol monitored the situation from the Yongsan presidential office around-the-clock from Monday night to Tuesday morning to oversee the government response and prioritize the safety of the people.

Yoon was periodically briefed by officials and held multiple meetings overnight at the national crisis management center as the typhoon hit the Korean Peninsula, leaving at least two dead and 10 missing. Thousands of people were evacuated and some 20,000 left without power.

This hands-on approach contrasts the president’s weak response to the torrential rainfall and massive flooding on Aug. 8, resulting in criticism for failing to command the disaster situation on-site.

On Monday night, Yoon held meetings at 9 p.m. and 11:40 p.m. and monitored the typhoon approaching the southern island of Jeju through CCTV images.

He was also briefed virtually by Yoo Hee-dong, chief of the Korea Meteorological Administration (KMA), on the typhoon’s path and wind speed and instructed him to give real-time updates to relevant agencies, local governments and fire departments.

Another meeting was convened at 5 a.m. Tuesday morning after Hinnamnor made landfall in Geoje, South Gyeongsang and again at 7:25 a.m. after the typhoon passed the peninsula and headed toward the East Sea.

“Do not let your guard down until the typhoon has completely passed,” Yoon said.

After receiving a report that the size, path and intensity of Hinnamnor was similar to that of Typhoon Maemi in 2003, Yoon checked on conditions in coastal cities, such as Busan, Tongyeong and Changwon in South Gyeongsang, where flood damage was being reported.

He instructed officials to “pay special attention to the safety of residents due to waves or flooding.”

Yoon also made an unannounced visit to the press room in the Yongsan presidential office and said that “tensions cannot be relaxed” and emphasized the importance of the safe evacuation of residents and the monitoring of roads to prevent casualties from flood damage or landslides.

Kim Eun-hye, senior secretary for press affairs, said in a briefing Tuesday morning, “While Typhoon Hinnamnor headed to the East Sea, it is still too early to be relieved. Now is the time to manage the damage situation and provide prompt support in the right place.”

She stressed that the president has called for a prompt response through an “action first, report later” system to strengthen the government’s preparedness for disasters.

Yoon, whose approval ratings have rebounded slightly since last month, is working on reforms, reshuffling the presidential office and trying better to meet public needs.

Last month, Democratic Party (DP) lawmakers criticized Yoon for his lack of visibility for remaining at his private residence in Seocho District, southern Seoul, instead of returning to the office on the night of the heavy rainfall and flooding that killed at least 14 people.

At the time, the presidential office said Yoon was on the phone receiving reports and issuing orders late into the night and didn’t return to the office to avoid creating a fuss with security, which might have distracted from emergency response efforts. This highlighted the inconveniences of the president living at his private home, which was not equipped with an underground bunker for crisis management, like the Blue House was.

Yoon issued his first apology as president days later and promised to improve the government’s emergency response system and to especially protect vulnerable people, like those living in semi-basement homes.