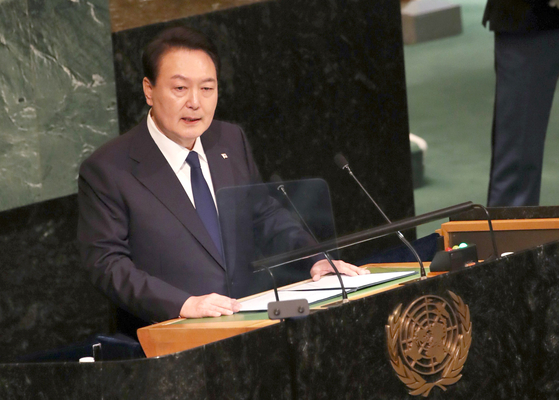 
President Yoon Suk-yeol said that South Korea is committed to standing together in solidarity with the international community to defend freedom and peace and overcome global challenges in an address to the United Nations Tuesday.

Yoon said the theme of the 77th session of the General Assembly, “A watershed moment,” encapsulates the “gravity of the global crisis” and that the “answers begin with solidarity and deference to the universally accepted global norms” working together with the decades-old UN system.

He underscored that “genuine freedom is not just being free of the shackles but having opportunities to live life to the fullest with dignity” and that “genuine peace is not an absence of war but removing conflict and enmity that hold back shared progress of humanity and building the foundation for greater prosperity.”

Yoon added that such genuine freedom and peace can be obtained when the world is free from disease and hunger, illiteracy and the want of energy and culture.

Contrary to expectations, Yoon didn’t mention North Korea by name in his 11-minute speech entitled, “Freedom and Solidarity: Answers to the Watershed Moment.”

However, he warned that “attempts to alter the status quo by force endanger the lives of innocent people” and that “nuclear weapons and other weapons of mass destruction pose increasing threats to humanity.” He added that “systemic violations of human rights leave millions of children deprived of their future.”

Yoon continued, “Such threats to freedom and peace must be overcome through solidarity and fearless commitment to the framework of universal global norms consolidated over the years within the UN system.”

Such remarks could have also been directed at countries such as Russia for its invasion of Ukraine, and China, as it seeks to expand its influence in the region.

Yoon noted that the “very first mission of the United Nations after its founding was to approve the Republic of Korea as the sole legitimate government on the Korean Peninsula” and to defend the freedom of South Korea by sending UN forces during the 1950-53 Korean War.

Yoon also stressed that the UN’s role is “indispensable” in solving challenges such as overcoming the pandemic and preventing future infectious disease outbreaks and pursuing the global agenda for decarbonization and climate change.

Yoon called on countries “at the forefront of digital innovation” to “offer broader assistance for digital education, technology transfer and investment.”

He said that South Korea “scaled up support for those who are in need” with resources secured through expenditure restructuring and is increasing its Official Development Assistance (ODA) budget “with a vision of achieving a more inclusive development globally.”

He noted that South Korea has accelerated research and development for Covid-19 therapeutics and vaccines and pledged $300 million dollars toward the Access to COVID-19 Tools Accelerator, or ACT-A, initiative and $30 million dollars to the Financial Intermediary Fund of the World Bank as a part of efforts to increase contributions to build a more robust global health architecture.

“As a responsible member of the international community,” said Yoon, “Korea is committed to playing its due responsibility and role for the freedom of global citizens and the prosperity of the global community.”

In a tweet Wednesday morning, Yoon wrote it was an “honor” to address the UN General Assembly for the first time and that “Korea calls for the resolute support of world leaders in upholding universal values and strengthening the @UN system to address the global challenges at this ‘watershed moment.'”

Yoon elaborated on his proposal to support North Korea’s economy by steps toward denuclearization, according to Kim Eun-hye, senior secretary for press affairs, in a press briefing.

Yoon told Guterres that “if North Korea chooses a better path,” he believes the South Korean government and international financial institutions “will spare no effort in making large-scale investments in North Korea and providing financial support to build infrastructure.”

He said that he would do his best “to help North Korea open its closed door so that it can contribute to the Northeast Asian region and world peace.”

However, Yoon said that if North Korea resumes its nuclear tests or carries out additional provocations, “I will ask for your continued interest and support so that the international community can sternly respond with one voice.”

Guterres assured Yoon that the UN Security Council will take a clear response to any provocations that threaten freedom and peace, according to Kim.