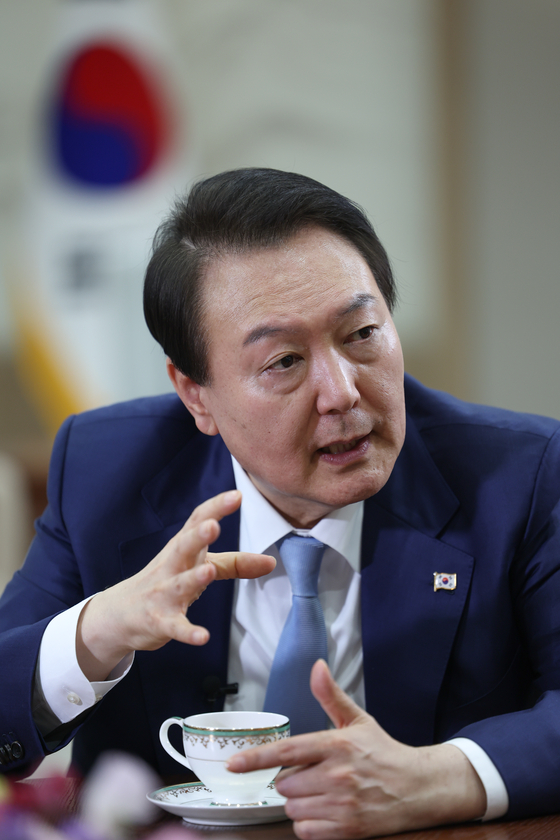 In an interview with Reuters at his office in Yongsan District, central Seoul on Monday, President Yoon Suk-yeol warned of an unprecedented response if North Korea carries out a seventh nuclear test. [PRESIDENTIAL OFFICE]

President Yoon Suk-yeol said North Korea will face a response “not been seen before” if it carries out a new nuclear test and urged China to persuade Pyongyang to denuclearize – or face an influx of military assets to the region.

In an interview with Reuters on Monday at his office in Yongsan District, central Seoul, Yoon was quoted by the news agency as saying it would be “extremely unwise” for the North to conduct a seventh nuclear test.

The last time North Korea conducted a nuclear experiment was in 2017 during the Moon Jae-in administration.

When asked what Seoul, Washington and Tokyo would do if the North goes ahead with one, Yoon reportedly replied that the response “will be something that has not been seen before,” without further elaboration.

On North Korea’s closest ally China, Yoon said the country has the “capability to influence” Pyongyang and the “responsibility to engage” in the process of denuclearization.

Yoon pointed out that the North’s actions were leading to increased defense spending in countries around the region, including Japan, and more deployment of U.S. warplanes and ships.

Yoon was quoted as saying that he did not expect American ground forces in South Korea to be reduced from the current level of 28,500.

Yoon also touched on the issue of rising tensions between China and Taiwan, saying, “I am firmly opposed to any attempt to change the status quo unilaterally.”

Any conflict over Taiwan should be resolved according to international norms and rules, he said.

A former high-level official at South Korea’s Ministry of Foreign Affairs told the JoongAng Ilbo on Tuesday that it appeared Yoon was sending a warning to Pyongyang.

“If North Korea pumps up the level of provocation in the near future, more U.S. strategic assets would be deployed to the Korean Peninsula,” said the official, “so [Yoon’s remarks in the interview] are sort of like an early warning to the North saying that you caused” the additional deployment.

It’s also a warning to China, said the official, in case it protests Washington’s move to send more strategic assets to the region.

Even as North Korea conducted more than 60 ballistic missile launches in 2022, none of the 10 United Nations Security Council meetings convened this year concluded with an adoption of a resolution on Pyongyang’s military provocations.

They were all vetoed by Russia and China.

“China has remained mum about [North Korea’s] recent provocations despite its expanded influence on the regime since the outbreak of the coronavirus,” said Kim Jin-ho, a political science and international relations professor at Dankook University.

“At a time like this, Yoon’s message stresses the need to elevate security cooperation between South Korea and China to ensure the peace and stability of the Northeast Asian region, not just the Korean Peninsula,” said Kim.