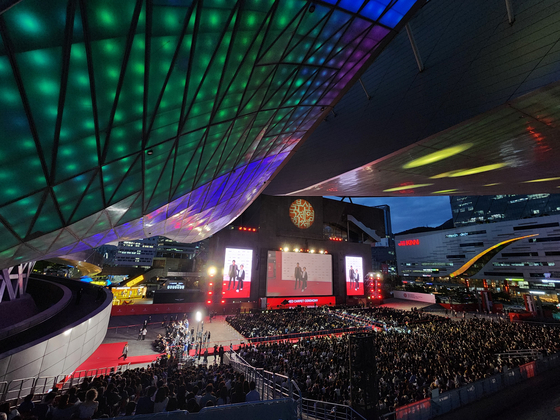 The opening ceremony of this year’s Busan International Film Festival held at Busan Cinema Center on Oct. 5. It’s the first time in three years the event was hosted at full scale due to Covid-19 pandemic. [YONHAP]


The Busan International Film Festival (Biff) wraps up its 10-day run Friday, leaving behind a vibrant festival mood after the event was held at full scale for the first time in three years.

The 27th edition screened 242 films, including 88 world premieres, from 71 countries at seven theaters in the southern port city.

For the main awards, “a Wild Roomer” by Lee Jeong-hong and “Shivamma” by Jaishankar Aryar received New Currents Awards. The award honors new Asian filmmakers who created their debut or second film.

The Kim Jiseok Award, which was established in 2017 in memory of the late program director Kim Ji-seok, went to this year’s opening film “Scent of Wind” by Hadi Mohaghegh and “Alteration” by Yalkin Tuychiev.

The award is given to films the best reflect the contemporary standing of Asian cinema.

The Biff Mecenat Award, granted to the best documentary from Asian regions, went to “A Table for Two” by Kim Bo-ram and “The Football Aficionado” by Sharamin Mojtahedzadeh and Paliz Khoshdel. A special mention was given to “Dear Mother, I Meant to Write about Death” by Chen Siyi.

Actors of the Year for male and female actors respectively went to Kim Young-sung for “Big Sleep” and Kim Geum-soon for “Star of Ulsan.”

Asia’s largest-film festival drew more attention this year as Korea has cemented its status as a global cultural powerhouse, thanks in part to the explosive success of the Oscar-winning film “Parasite (2019)” and the Netflix series “Squid Game” (2021).

BIFF director Huh Moon-young expressed satisfaction with overall programs, while acknowledging some technical problems in the online ticket sales ahead of the opening.

“Despite some glitches in the online booking system, I think (BIFF) accomplished 100 percent of its goal in terms of quality during the festival period,” Huh said at a press conference. “I think this year’s festival matched the pre-pandemic edition in 2019, and returned in an even better form.”

It brought together over 3,000 guests at home and abroad to provide audiences with rare chances to meet and talk with famed directors and actors.

Hong Kong star Tony Leung Chiu-wai stole the spotlight when he showed up at screening events of his movies selected by himself, talked about his acting career in the Open Talk session and attended a handprint ceremony.

At the On Screen section for over-the-top (OTT) content, major streaming platforms screened part of their upcoming Korean drama series ahead of their official releases.

The number of world premiered drama series tripled from last year to nine this year, reflecting the rising popularity of OTT content.

A closing ceremony, co-hosted by actors Kwon Yul and Han Sun-hwa, is scheduled for Friday evening. The festival officially ends with the screening of Japanese director Ishikawa Kei’s “A Man” at 8 p.m.