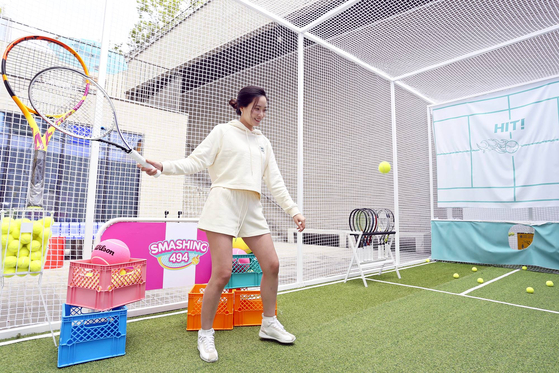 A tennis pop-up store at the Galleria Department Store in Yongsan District, central Seoul in September. Tennis has become a popular sport among the young in Korea. [YONHAP]

“I feel an instant relief of stress as the tennis ball hits my racket,” said Yu, a 29-year-old office worker who plays tennis more than five times a week.

“It’s amazing how I can become aware of my body movements when I fully concentrate on my performance,” she said. “I can’t think of anything else when I swing and I love that it allows me to concentrate on myself.”

Yu is among a growing number of young Koreans who are taking up tennis as a hobby.

Sales of tennis equipment jumped up 210 percent in the second quarter this year compared to a year earlier on Auction. Sales of tennis rackets increased by 229 percent on-year in the first quarter of 2022 on the e-commerce marketplace SSG.com.

While golf was a trending sport last year, the increasing green fees forced some people to switch to a different leisure activity, one that comes with the same “luxurious” experience at a cheaper price.

Tennis quickly grew popular as an alternative to golf, leading to a rising number of indoor tennis courts that attracted young people with trendy interior designs worth showing off on social media.

Some take private lessons, while others play in teams or alone.

Many brands have capitalized on the surging interest in tennis by launching more tennis apparel. Major department stores have held tennis events and tennis pop-up stores.

In June, Lotte World Mall in Jamsil, southern Seoul, launched a tennis pop-up store called the Court, which attracted more than 50,000 people in the first three days, according to Lotte Department Store. Mini tennis courts, photo zones and booths that sold tennis clothes were featured in the month-long event.

But hitting balls and showing off one’s workout routine on Instagram isn’t all there is to Korea’s tennis trend.

“I’m still a beginner, so I’m not investing that much in professional tennis gear,” said Shin.

“I tried using different equipment but my body didn’t seem to notice the difference. If I can’t master tennis, I figured I could get familiar with it through attractive tennis apparel.”

Oh Won-seon, 32, a jewelry shop owner, echoed Shin’s enthusiasm for tennis clothes, saying it, too, was her top priority in playing tennis.

“They’re really pretty and make me want to buy more outfits,” said Oh. “I feel like I play better when I’m wearing nice clothes. Besides, I can get more satisfying photos for my social media.”

Another great aspect about tennis, says Oh, is that it has an active community on Instagram.

Oh says she relies on the Instagram hashtag #tennistagram to share her passion for the sport with people who feel the same way.

“Amateurs like me use the hashtag a lot,” said Oh.

“The best part of using the hashtag is that we encourage and uplift each other. I receive a lot of encouraging messages and feedback when I post about what I’ve learned during my tennis lessons and what I need to work on.”

Shin says she often looks up #tennistagram to gain more information about the sport.

“Using the hashtag helped me get involved in the tennis community and gain access to tennis-related news and information,” said Shin.

“For example, I learned that the Association of Tennis Professionals tour was being held in Seoul recently and that new rackets were hitting shelves.”

That social media element, says Shin, allows her to learn more about tennis even outside of private lessons.

Hallyu: For some, a dream maker, and others, a heart breaker