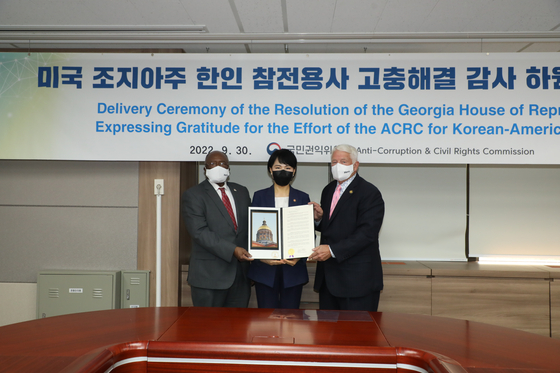 
Two politicians from the U.S. state of Georgia visited Korea’s civil rights commission Friday to thank it for helping veterans get benefits in their state.

Ed Harbison, a senator in the George legislature, and Representative Bill Hitchens were behind bills allowing anyone who served in the military of an American ally during a time of war to qualify for a Georgia driver’s license or license plate adorned with the word “Veteran” and an American flag.

The bills were implemented in Aug. 2020 and July 2021 and Georgia became the first state in the U.S. that allows a foreign national to be honored as a war veteran and receive benefits such as discounts at large grocery stores and preferential interest rates on loans.

In order to get the benefits, proof of participation in a military allied with the U.S. was required. In the case of Korea, the proof was replaced with an English Certificate of Military Service.

According to the regulations, only the veteran or blood relatives can make an application. But for Korean War and Vietnam War veterans who left their homeland more than 40 years ago, it wasn’t easy to find relatives to help get their records in Korea.

Hwang Kwan-il was such a veteran. He served as a second lieutenant in the Korean army during the Korean War and eventually moved to Georgia. He became the first president of the Korean War Veterans Association of the U.S. southeastern region.

After Hwang’s only son passed way, he was living alone and suffering from severe dementia. He could barely remember his hometown or address, but he did remember his pride in fighting as a platoon commander in the Battle of Sniper Ridge in Cheorwon County, Gangwon.

Issuing an English military service certificate required the cooperation of many organizations in Korea.

A group of Korean-American war veterans filed a civil complaint with the Anti-Corruption and Civil Rights Commission to confirm their participation in the war.


With the cooperation of national agencies such as the Ministry of National Defense and the Ministry of Patriots and Veterans Affairs, the commission was able to discover service numbers for 47 Korean-American war veterans living in Georgia and issued English Certificates of Military Service for them.

On Friday, Harbison and Hitchens met with Anti-Corruption and Civil Rights Commission chairperson Jeon Hyun-heui to thank the commission for its efforts.

“Last April, Private Hwang passed away. […] The Anti-Corruption and Civil Rights Commission joined ‘Saving Private Hwang Gwan-il’ and helped him gain the honor of being an American veteran during his life time.” said Senator Harbison.

His words were echoed by Peter C. Lee, a Vietnam War veteran.

“Due to financial difficulties and the Covid-19 pandemic, I couldn’t go to Korea myself nor did I have anyone to help so I was struggling,” said Lee.

“But I felt indescribable joy and pride when I received an English military service certificate containing my military record from the Anti-Corruption and Civil Rights Commission,” Lee said. “My home country remembered me and delivered my forgotten war record with an official seal of the Republic of Korea. It was an honor that I could not get in my life without the help of the commission.”

“As a veteran of the Vietnam War serving as a U.S. Marine, I watched how brave Korean veterans fought on the battlefield,” replied Hitchens.

“I sincerely thank the Anti-Corruption and Civil Rights Commission and the Korean government for helping to honor the dedication of Korean veterans,” he said.