[INTERVIEW] Mayor of Jecheon wants you to come to his city

[INTERVIEW] Mayor of Jecheon wants you to come to his city 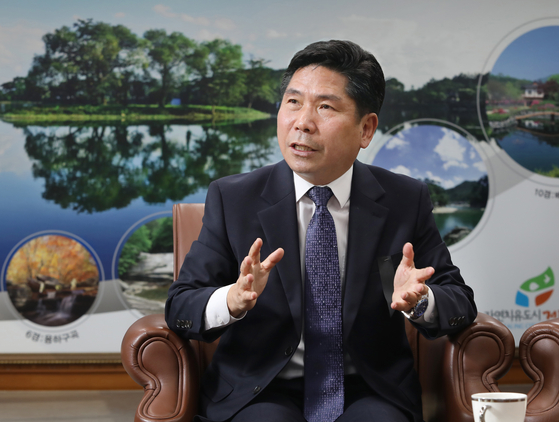 
After an hour-long KTX train ride from Seoul, the city of Jecheon offers lots to travelers in search of peace and tranquility.

Jecheon Mayor Kim Chang-gyu is hoping to see 5,000 tourists per day and attract 3 trillion won ($2.13 billion) in investment to turn the quiet city into a dynamic and prosperous town.

The inland city in North Chungcheong is promoting tourism. It is planning to build spa resorts near Cheongpungho Lake and the Euilip Reservoir. Home to the Catholic holy ground of Baeron, which served as a fountainhead for the spread of Catholicism in Korea and where Catholics went into hiding to avoid persecution in 1791, Jecheon is planning to establish a pilgrimage route connecting the Baeron Holy Ground to Bakdaljae Peak.

Jecheon’s first, second and third industrial complexes already have over 100 companies in areas like food and medical supplies. The city plans to add a fourth and fifth and designate certain areas for foreign investment with benefits such as national and local tax breaks as well as employment subsidies and education and training subsidies.

Mayor Kim is an experienced diplomat, serving as Korea’s ambassador to Kyrgyzstan and to Azerbaijan. After taking the helm of Jecheon on July 1, Kim vowed to bring his past experience and know-how from the global stage to the city of Jecheon.

Kim sat down with Cheong Chul-gun, CEO of the Korea JoongAng Daily, on Oct. 31 at Jecheon City Hall to talk about his vision for Jecheon.

Below are edited excerpts of the interview.


Q. You have long experience working in foreign affairs. How can you leverage such diplomatic assets for your city?


A. With my past experiences as a diplomat, I believe there are three ways I can contribute to the city of Jecheon.

First, I think I can provide an open, global eye in terms of the development of the city and its environment. Even the locals haven’t realized until now how beautiful Jecheon is. In the past, I’ve worked mostly in Europe, and Cheongpungho Lake, for instance, has a beauty that is no less than anywhere in Europe. I believe it needs to be developed well as a treasure for Jecheon, and give a new sense of the possibility of developing tourism in Jecheon.

I also wanted to keep the residents open-minded. It is inevitable for the Galapagos syndrome to happen if people just stay in one region and compete among themselves. But by giving an international perspective, we can have more broaden policy options.

Another way is that I can try many policies with international cooperation. For example, we recently signed an MOU with Guairá in Paraguay to promote exchanges in various fields such as economics and culture in October. Currently, I am trying to attract global investment. I made a pledge to attract 3 trillion won in investment during my term, and foreign investment will account for a large portion.


Korea as a whole has poor demographics, and that is even more alarming in the provinces. What is Jecheon doing to overcome the demographic decline?

First, jobs are important. [There must be a guarantee that] people can come to Jecheon and work in a good environment with good pay. This does not only concern farming jobs but also other jobs such as office workers.

Population growth is a very complex and difficult issue, and it cannot be tackled only with budgetary support. We need to provide comprehensive support by taking care of the environment of birth, childcare and even through university education. Public postpartum care centers and general hospitals are very important. There are two general hospitals — Seoul Hospital and Myongji Hospital — in Jecheon. But because they are secondary hospitals, they do not provide enough medical care. In order to upgrade Jecheon’s medical services to the next level, we must have a tertiary care hospital, and that is why we are trying to attract a police hospital.


As you have emphasized, employment opportunities are directly linked to population growth. The city of Jecheon is trying to grow its industrial complexes as part of the goal to attract 3 trillion won in investment. How can you attract foreign companies or foreign employees?

Attracting 3 trillion won in investment is a goal that can never be achieved only by attracting factories. More importantly, Jecheon is a green area with natural resources. Therefore, we are planning to develop “healing tourism” centering around Cheongpungho Lake and the Uirimji Reservoir and build spa resorts with more than 500 rooms and prepare infrastructure in which people can come and relieve stress.

There can be tourism products that can use the natural infrastructure of Jecheon, such as a trekking course that tours around Cheongpungho Lake, building a suspension bridge and a trail road along the lake. After trekking around the lake, people can go hiking on Geumsusan Mountain and Woraksan Mountain, and when they come back at night, they can get refreshed at the spa. This way, we will be able to have a European-like advanced vacation [course] in Jecheon.


Jecheon has many foreign residents, including marriage immigrants and foreign workers. What are some policies to create a foreigner-friendly city?

As of September 2022, the number of foreigners registered at the Jecheon Multicultural Family Support Center is 2,760, and among them, 828 are marriage immigrants mostly from Vietnam, China and the Philippines.

I have worked in foreign affairs for a long time and am personally a foreign-friendly [mayor].

In particular, I am trying to create a village dedicated to Goryeo people (ethnic Koreans in the post-Soviet states). Many of our compatriots are coming to Korea from the CIS (Commonwealth of Independent States) due to the difficult situation there. There are Goryeoin villages of around 10,000 people formed in Incheon, Ansan and Gwangju. I would like to build a luxury village so that Goryeo people can come and pursue their careers and live a more comfortable life.

If we serve around 5,000 Goryeo people, I believe Jecheon will look different. Although we have been putting efforts into attracting factories and companies, it has not been easy to bring in enough people. For rural jobs, [Koreans and] foreigners may feel uncomfortable with each other due to cultural differences. But Goryeo people are very sincere and diligent because they share similar mentalities, ways of thinking and culture with Koreans. If we bring them here and live together, I believe it can bring many positive effects.

Like the German village in Namhae County, Jecheon has historical justifications [to form a Goryeo village.] People who fled to Primorsky in the late Joseon Dynasty and Japanese colonial era were again forced to move to Central Asia, all of whom are Koreans. At that time, major generals who fought in the Anti-Japanese Righteous Army Movement, including General Yu In-seok, first started the righteous army in Jecheon. Jecheon was also one of the places where the United Righteous Army and Japan faced off, which eventually left the city completely destroyed.


One of your main goals is an average of 5,000 tourists visiting per day. What are the specific plans?

I had two goals in mind in order to revive the local economy: one was to attract companies, and the other was to develop tourism, which need 3 trillion won of investment over four years in order to have jobs created.

The old downtown area of Jecheon has declined a lot. So what we have launched is a “Love Tour” program, in which we provide a tour guide or 300,000 won for a tour bus. We are trying to attract at least 500 to 700 tourists a day through the program.

Another way to attract tourists is through sports marketing. Jecheon is the best place to host a national sports competition. The sports facilities are great, and as we’re located in the middle of the country, sportsmen can come from anywhere. This way we can have about 800 athletes coming on average per day.

We are also pushing to build three to four world-class luxurious park golf courses, with 36 holes or 54 holes. So-called park golf courses mainly work around golf clubs. There are currently 21 golf clubs in Jecheon. Once golf club members come to Jecheon, they would eat breakfast, lunch, dinner, stay in a resort, consume alcohol, sing karaoke — and they would also go sightseeing. There is not much that can create such effective demand [than park golf courses.] We have to establish some parks like this to encourage them [to open their wallets.]


Culture has become something important as the Korean wave of pop culture became popular globally. Are there any cultural festivals in Jecheon that you would like to introduce to foreign visitors?

There’s the Jecheon International Music & Film Festival (Jimff) in the summer. The festival has now positioned itself in domestic film and music areas. For the One Summer Night program of the Jimff, for instance, 5,000 people came from Seoul and its surrounding regions.

The Korean Medicine Bio Fair in Jecheon in the fall has established itself as well. The Bakdal Song Festival, a trot music festival, had 100,000 visitors.

Recently we held the first Uirimji Agricultural Culture and Art Festival, which also got a lot of attention. Jecheon is one of the cities in Korea with the largest number of festivals.