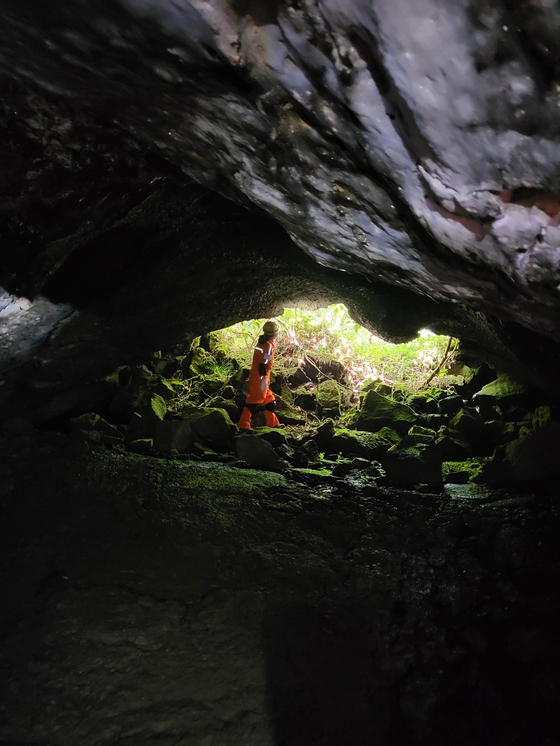 Local reporters finally reach the exit of the Bwengdwigul Lava Tube last week after walking and crawling across a part of it, located closest to Geomunoreum where the volcano erupted and has the complex labyrinth of small lava tubes that stretch out like a spider web. [YIM SEUNG-HYE]


JEJU ISLAND — Jeju Island has been trying very hard to promote itself as the home to a very unique natural heritage — the volcanic lava tubes. The island has participated in the annual World Heritage Festival, which was launched in 2020 by the Cultural Heritage Administration (CHA), for two consecutive years in hopes of letting the world know that the island has more to offer than just beautiful beaches and sweet tangerines.

Among the 15 regions in Korea that are home to Unesco-designated world heritages, the CHA selects about three to four regions to participate in the annual festival. Each region then comes up with different programs to promote their world heritages around this time of year.

The inaugural festival kicked off in 2020 and made stops in different regions like Andong and Yeongju in North Gyeongsang. However, when the festival reached Jeju in early September, it had to be suspended due to the forecast of back-to-back typhoons that were battering the country’s southeastern coast. The following year, the organizers of the festival’s Jeju edition made their best preparations and had their fingers crossed, but with the rapidly rising number of Covid-19 cases, the government ordered the Jeju event to be taken online, just three days before it began. 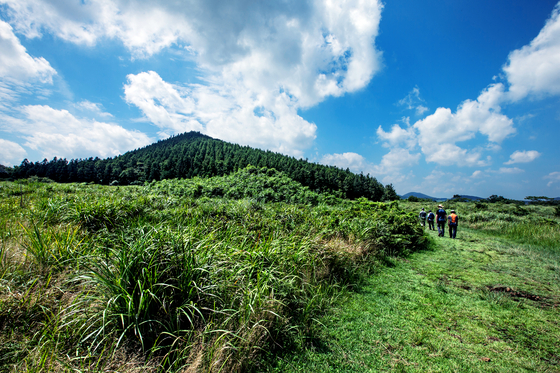 Jeju’s Geomunoreum, the birthplace of the lava system [JOONGANG ILBO]


“Many participants who signed up to participate in the festival’s Jeju edition […] in order to have access to the Geomunoreum’s lava tube system, were very upset that the event got canceled for two years,” said Kang Kyung-mo, chief officer of this year’s festival. “But we are very positive that it will be successful this year. We had two years to prepare and we are very ready to show the world the natural wonders of Jeju Island.”

This year’s World Heritage Festival, celebrating its third year, stops in three provinces — Andong and Yeongju in North Gyeongsang from Sept. 3 to 25 for the Historic Villages of Korea, Suwon City in Gyeonggi from Oct. 1 to 22 to present the large mountain fortress of Joseon Dynasty (1392-1910) known as Namhansanseong, and Jeju Island on Oct. 1 to 16 for the Jeju Volcanic Island and Lava Tubes.

Jeju’s Geomunoreum is estimated to have erupted some 8,000 years ago, and its lava traveled northeast for about 14 kilometers (8.6 miles), forming a unique lava tube system until it came to a halt after reaching Woljeongri Beach. 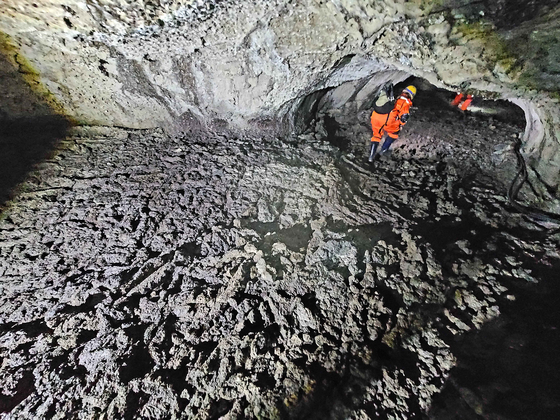 Bengdwigul Lava Tube is located closest to Geomunoreum, therefore, has the complex labyrinth of small lava tubes that stretch out like a spider web. [YONHAP] 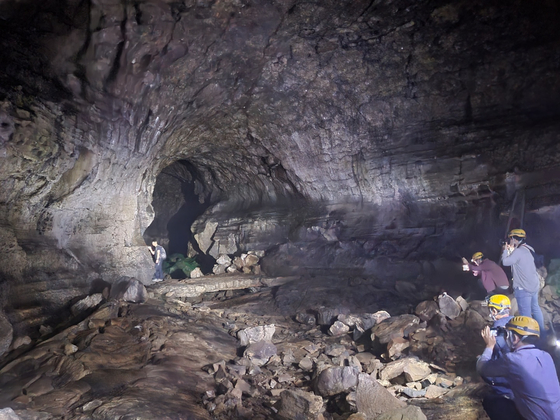 Gimnyeonggul is known to have characteristics of both a lava tube and a limestone cave. [YIM SEUNG-HYE] 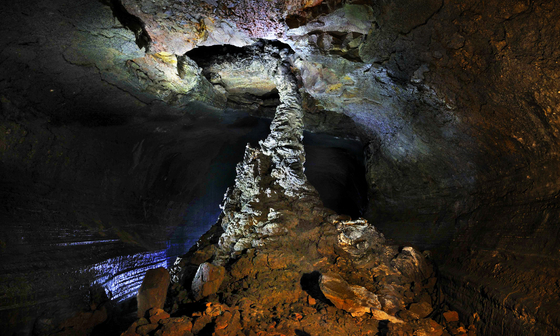 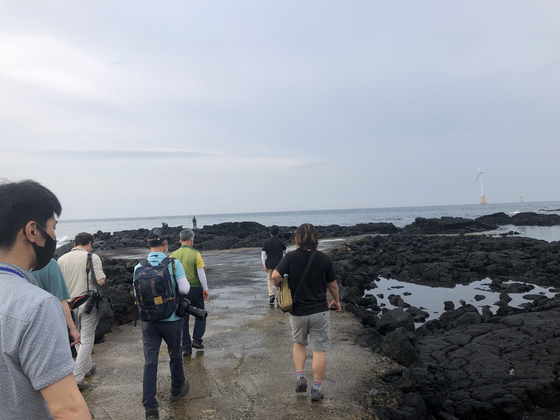 The lava that erupted from the Geomunoreum some 8,000 years ago came to a halt after reaching Woljeongri Beach. [YIM SEUNG-HYE]

The two years of “trial runs,” according to Kang, who served as the vice chief officer during the past two years, “kind of provided us with a lesson on which direction to take this festival.”

After talking to many Jeju Islanders who live in the villages that surround the world heritage sites, or in other words, the World Heritage buffer zones, Kang said he realized that the festival organizers were barking up the wrong tree. 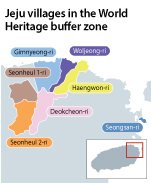 “Of course we have to promote the world heritage of Jeju to people outside the island, but first, we had to include the people of Jeju,” he said. “They were already full of grievances about the designation in the first place because their villages are inside the buffer zone, which restricts any kind of redevelopment,” Kang said. “Holding a festival may bring in tourists, but they still weren’t happy about it because they didn’t understand the point.”

That is why this year’s theme for the Jeju festival is “Connect.”

Despite living right by the Unesco-designated natural heritage, Kang said many villagers had never really been educated on the significance of the caves that form the lava tube system, let alone been in one.

Among all the caves that form the lava tube system, only 1 kilometer — of Manjanggul, the longest lava tube on the island which stretches 7.4 kilometers — has been open to the public.

The CHA has to give the green light to each individual, researchers in most cases, who wish to enter into any of the caves that are off limits to the public for preservation reasons. But with the launch of the festival, more people are now able to experience the hidden caves, even if only during the festival period.

“After showing the villagers around inside the caves and telling them about how they should be proud that their village is home to a world heritage, it was just natural for them to become ambassadors of Jeju’s world heritage,” said Kang.

In July 2021, the seven villages inside the buffer zone formed the World Natural Heritage Village Preservation Association and took the initiative in organizing this year’s festival. 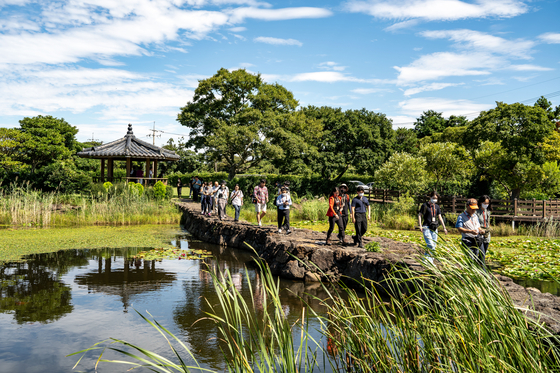 Local reporters on Wednesday cross the bridge of the Mosani Pond in Deokcheon-ri in Jeju’s Gujwa County to experience a part of the upcoming World Heritage Festival’s Jeju edition. [YIM SEUNG-HYE]


“We are happy to finally be involved in the event and excited to tell visitors of our village’s great heritage,” said Lee Il-hyeong, the president of the association.

The festival organizing committee in Jeju hosted a two-day media trip last week, allowing local reporters to experience what the upcoming festival has to offer prior to its official kick-off in October.

Residents from each village came up with their own unique programs.

For example, Deokcheon-ri is inviting anyone interested in camping to its village from Oct. 1 to 2. About 20 groups of campers, who can bring their own camping gear, will be selected for this program to set up their tents and spend a night in the village’s park, located by its famous Mosani Pond. During the day, the participants will visit the entrance of the Otsanjeongul, which is also usually off limits, and when the sun goes down, have a barbeque party.

“We will be visiting the entrance to one of the caves, and I can’t wait to tell the story that had been passed down generation after generation,” said Yang Young-seon, the village head of Deokcheon-ri. “I won’t spoil the fun for the participants, but my mother told the tale to me and as a young girl, I was so terrified to even go near the cave.”

Yang said there are many stories related to the pond as well, which will have to be told over a campfire.

“I think participants will have a great time listening to stories told by villagers who have lived here all their lives,” said Yang. “We always knew that such heritages were close to us but just didn’t know why it was important for us to preserve and promote it all. Now, all the villagers are on the same page and are willing to volunteer.” 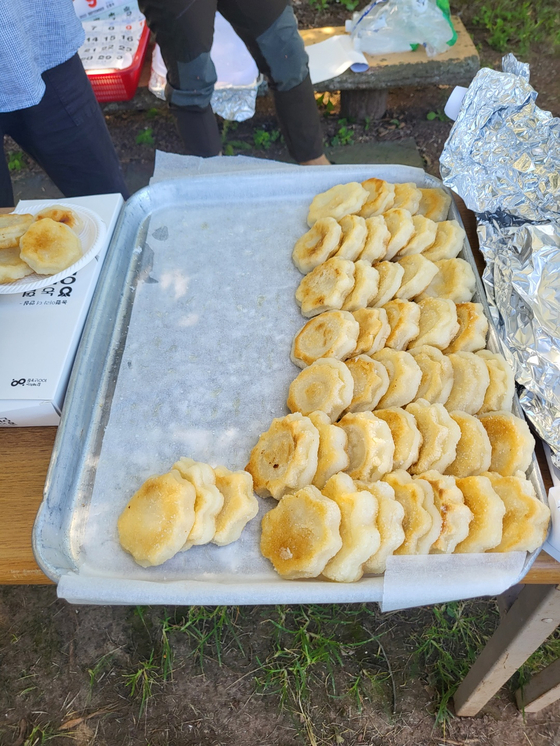 The participants of the Deokcheon-ri program will also take part in a “fun gireum tteok-making competition,” said Yang, adding that gireum tteok, or stir-fried rice cakes, have long been the favorite snack of villagers, who are mostly farmers.

Visitors to Gimnyeong-ri will be able to learn about Jeju haenyeo (female divers), which have been inscribed on Unesco’s Intangible Cultural Heritage list since 2016, from Oct. 8 to 9. During the two-day event, participants will have a go at making taewak, the orange floats that also hold the catch, and listen to the women tell different tales of their lives and how they had to live the life of a haenyeo for being born in a village near the sea.

Registration for the “Visit the World Heritage Villages” will be available on the festival’s homepage (worldheritage.kr).

The festival’s signature Walking Tour program will continue this year as well. 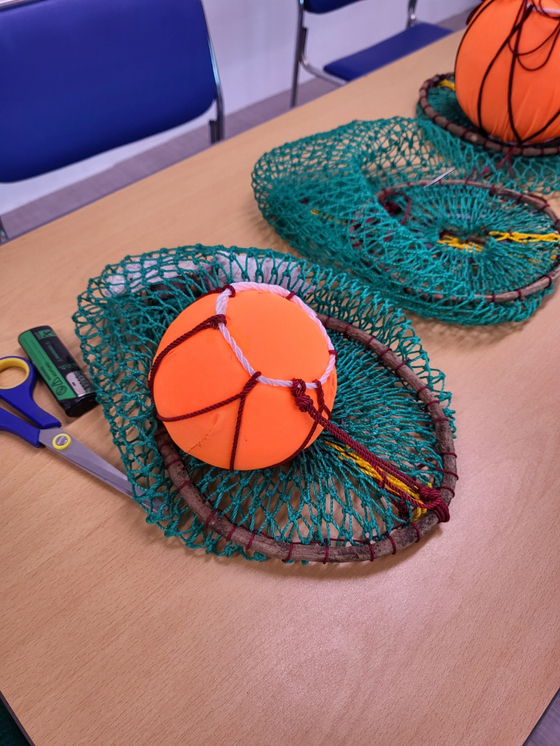 At the Gimnyeong-ri Village, festival participants can have a go at making taewak, the orange floats that also hold the catch, regarded as the “other self” of Jeju haenyeo (female divers). [YIM SEUNG-HYE]

The walking tour allows participants to walk in, on top of and near the lava tubes. The course, which stretches 26.1 kilometers and starts from Geomunoreum, the birthplace of the lava, to Woljeongri Beach, where it ends, is divided into four courses or difficulties so that people can choose accordingly. The program is offered five times a day for 14 days, taking a relatively large number of people when compared to other special expeditions that make visits to the off-limit zones of Manjanggul and Beingdwigul. Online reservations are required, and there is a participation fee of 5,000 won ($3.70).


“I recommend people learn about the lava tube system before participating in the programs offered by the festival, as they’ll be much more interested by what they see,” said Ki Jin-seok, a researcher of Jeju World Natural Heritage Center.