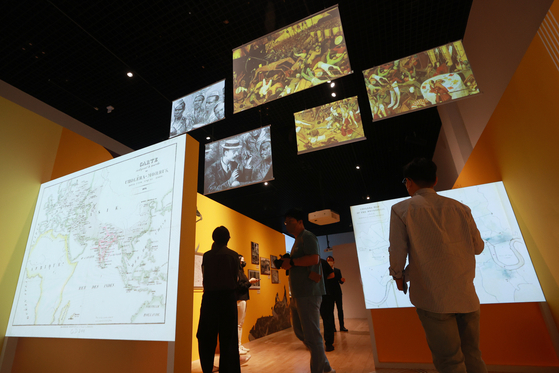 Visitors look at displays during a special exhibition titled “Re-connect: Until Everyone Is Safe” at the National Museum of Korean Contemporary History in central Seoul on Sept. 7, 2022. The exhibition to mark the museum’s 10th anniversary runs from Sept. 8 to Jan. 31. [YONHAP]


Ranging from smallpox, black plague and cholera to Spanish flu and Covid-19, an exhibition under way at a national museum in central Seoul provides a graphic and detailed look into how mankind has fought against infectious diseases.

The National Museum of Korean Contemporary History opened a special exhibition titled “Re-connect: Until Everyone Is Safe” on Thursday to mark its 10th anniversary.

The presentation gives a quick review of the history of contagious diseases that have remained in step with the advancement of civilization and shows how the Covid-19 pandemic has clearly revealed weakness in human society through a total of 150 photos, illustrations, videos and other materials on display.

Visitors will first see a video reminding them that the history of infectious diseases began with humankind’s adoption of agrarian and sedentary lifestyles and the diseases have moved through commerce among neighboring communities and wars of conquest.

The first chapter of the exhibition, titled “Prosperity and Disease Brought through Exchanges,” shows that regional endemic diseases have spread through the international trade network to other continents with the rapid expansion of commerce and exchanges among different countries.

On display in the section are paintings and illustrations depicting the deadly outbreak of black plague and cholera around the world as well as official documents showing the Korean authorities’ efforts to contain the spread of cholera in the late Joseon Dynasty (1392-1910) and the Japanese colonial era (1910-1945).

While looking at photos taken during the Spanish flu that killed tens of millions of people all over the world from 1918-1919, visitors may be surprised at the similarity between the situation and what they have experienced due to Covid-19.

The historical black-and-white photos show children going to school wearing masks, baseball players playing a game wearing masks, men waiting at an outdoor barber’s shop to get a haircut and a passenger who is denied boarding a streetcar for not wearing a mask. There are also photos of military tents set up for a quarantine camp, a worker sterilizing a train and patients being treated at various hospitals.

Magnified copies of various newspaper articles about the disease and related commercial ads are also on display. You may smile at a phonograph advertisement that reads, “You can attend concerts of grand opera, light opera, sacred music or the fine old songs without running any risk of contracting influenza.”

The second part shows how the development of medical treatment led by the introduction of vaccines and antibiotics greatly improved people’s ability to respond to infectious diseases in the 20th century. The exhibition also reminds visitors of the fact that new contagious diseases, such as HIV, bird flu, SARS, MERS, novel influenza, Covid-19 and monkeypox, have continued to appear beyond the anti-epidemic barriers that humankind has erected.

The third part, “Re-connect,” looks back on human society’s weaknesses exposed by the Covid-19 pandemic, such as the unequal distribution of vaccines based on the economic power of the recipients and groundless bias and discrimination against those infected.

The exhibition then encourages visitors to think about the need to come together in solidarity and cooperation to overcome the current Covid-19 situation, showing a slogan from the World Health Organization (WHO): No one is safe until everyone is safe.

“When we planned this exhibition last year, we thought the pandemic would have been contained to some degree by the time the event opened and that it would be an exhibition that looks behind past memories,” Nam Heesook, director of the museum, said during a media preview of the exhibition Wednesday.

“However, the pandemic is still continuing, and now it seems that we are living in an era where we have to adapt to this environment. We may not be able to completely overcome it only based on scientific response. Only when people around the world reconnect the strings of cooperation and solidarity can they overcome the pandemic crisis facing humanity together.”

The exhibition runs till Jan. 31 on the first floor of the museum.