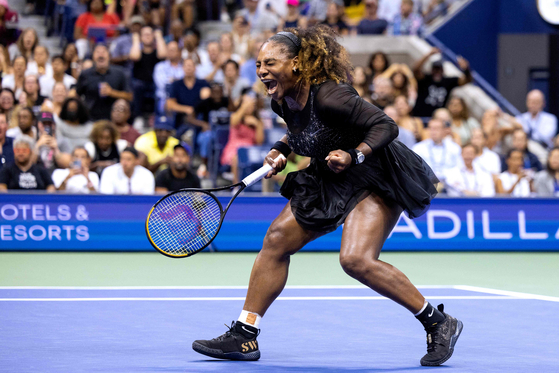 Serena Williams reacts after a point against Montenegro’s Danka Kovinic during their 2022 US Open women’s singles first round match at the USTA Billie Jean King National Tennis Center in New York on Monday. [AFP/YONHAP]


Serena Williams opened what is set to be her last Grand Slam with a victory, beating Danka Kovinić of Montenegro in two straight sets in the first round of the U.S. Open on Monday.

Williams struggled with her serve in the start, double-faulting twice in the first game, but was eventually able to find her serve form, reaching a 66 percentage success rate and winning 33 of 43 first serve points.

The 23-time Grand Slam winner beat the 27-year-old world No. 80 Montenegrin 6-3, 6-3 and will next face world No. 2 Anett Kontaveit of Estonia in the second round, scheduled to be held on Wednesday evening. It will be the first time the two players face each other.

On Wednesday morning, Williams will open the women’s doubles with her sister Venus.

While the question of retirement has already been raised quite a few times for the 40-year-old, Williams had never herself spoke about the topic much until August, ahead of the U.S. Open.

“There comes a time in life when we have to decide to move in a different direction,” Williams posted on social media on Aug. 8.

“That time is always hard when you love something so much. My goodness do I enjoy tennis. But now, the countdown has begun.”

Williams ends her career where it all began for her, having won her first-ever Grand Slam title at the 1999 U.S. Open.

Williams turned pro in 1995 when she was 14 and has been a trailblazer, both for tennis and women athletes in general.

“I’ve been reluctant to admit to myself or anyone else that I have to move on from playing tennis,” Williams said in an interview with Vogue magazine on Aug. 9. “I’m evolving away from tennis, toward other things that are important to me.” 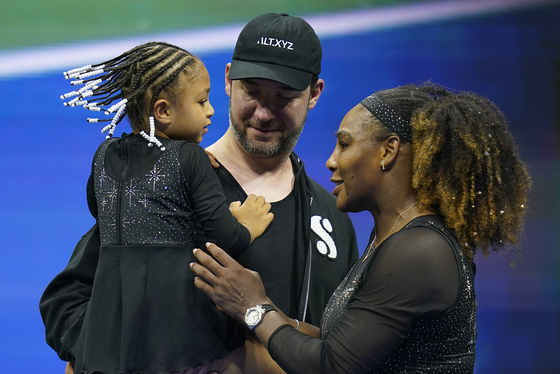 Serena Williams, right, talks with her daughter Olympia and husband Alexis Ohanian after defeating Danka Kovinic of Montenegro during the first round of the US Open women’s singles on Monday in New York. [AP/YONHAP]


The stands on Monday were packed with spectators trying to witness what will probably be the tennis legend’s last Grand Slam first singles round match.

Her win was also witnessed by her husband, Alexis Ohanian, and their daughter, Olympia, who was wearing not only matching outfits with her mother but also wore white beads in her hair, paying tribute to Williams’ look when she won the first of her six U.S. Open titles in 1999.