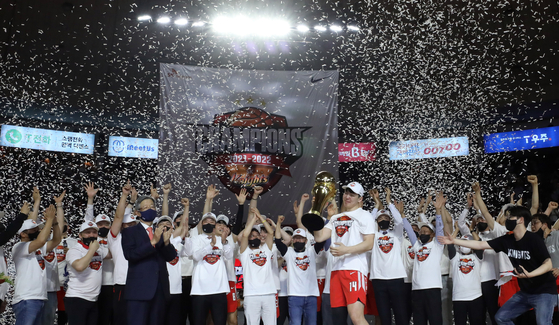 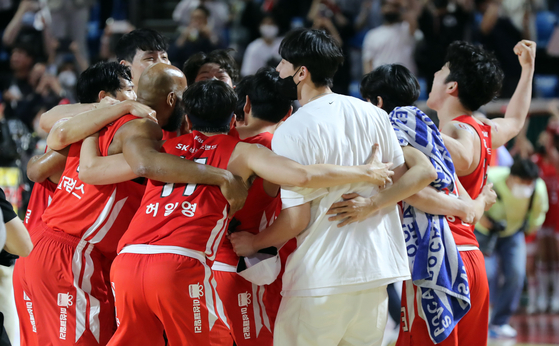 The Knights beat Anyang Korea Ginseng Corporation 86-62 in the fifth match of the best-of-seven playoffs on Tuesday.

The last time the Knights won the Championship was in the 2017-18 season when they finished the regular season runners-up.

The Knights have now won four matches against Anyang in the best-of-seven playoffs. The Knights beat Anyang 90-79 at home on May 2 then beat them again at home on May 4. Anyang won 81-72 on Friday at Anyang Gymnasium in Anyang, Gyeonggi but lost Sunday’s match 94-79 at the same venue.

Kim Sun-hyung of the SK Seoul Knights won the MVP award, receiving 66 out of the 95 media votes.

The Knights ended the regular season top of the standings with 40 wins and 14 losses, three wins more than runners-up Suwon KT Sonicboom. Anyang KGC finished the season in third with 32 wins and 22 losses.

For the final round of playoffs, the Knights faced Goyang while Anyang faced Suwon. The Knights secured their spot in the Championship series after beating Goyang in three matches, 101-83, 91-83 and 86-81.

Anyang earned their spot in the Championship series after beating Suwon KT Sonicboom 81-79 in the fourth game of the best-of-five playoffs on April 27. Anyang had entered the fourth match with a 2-1 lead over Suwon, having lost the opening game 89-86 to Suwon and then won two on the trot, 90-78 and 83-77.
Despite dropping out on the Championship title, this is the second year in a row that Anyang have advanced to the Championship series. Last season, Anyang took home the KBL Championship title on May 9, winning the first four matches of the best-of-seven series against the 2020-21 regular season winner Jeonju.

Anyang last year became the first champion to be crowned in two years as the KBL decided in March 2020 to cancel the remainder of the regular season and the playoffs due to safety concerns surrounding the Covid-19 pandemic.

SK Seoul Knights just one win away from Championship title