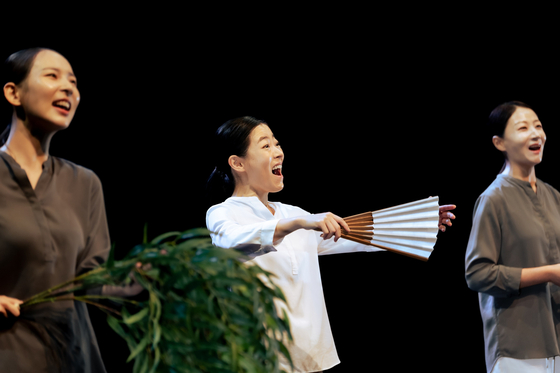 Performers for the upcoming performance of “Knotting The Time” rehearse during a showcase held last year at the Asia Culture Center in Gwangju. The performance premieres on Oct. 7. [ACC]


Three Korean men considered to be top-notch in their respective careers — director and choreographer Jung Young-doo, playwright Pai Sam-shik and composer Choi U-zong — have teamed up to create a performance about women.

The performance titled “Knotting the Time” is a mix of traditional music and dance. The Asia Culture Center in Gwangju said it commissioned the three experts to create a signature piece for the state-run theater two years ago.

“We wanted to share the life and psychology of different women who had no choice but to dedicate themselves to different types of rituals and events that their families conducted,” said Pai during a press conference held last week at the Press Center in central Seoul for the upcoming performance. Pai wrote the script for the performance.

“Knotting the Time” tells the stories of these women by introducing 13 of the 24 jeolgi, a solar division of the year in the lunar calendar.

Korea traditionally used the 24 jeolgi. Different rituals were conducted in many households on the day of each jeolgi during the Joseon Dynasty (1392-1910). It was, of course, the women who had to prepare foods to celebrate or commemorate the jeolgi. Many Korean women of age often tell stories of how they spent so much time in the kitchen, preparing for different rituals one after another and that it was a never-ending cycle.

Jung said he didn’t want to focus only on the women’s sufferings and sacrifice in the upcoming performance, “which would make the whole performance very dark and gloomy. We wanted to shed light on their hopes and dreams, what they were thinking as they sat in front of the furnace, what their dreams were as a young girl and so on.”

For example, there’s a scene on hansik, which is one of the 24 jeolgi that falls around May 5 of the Gregorian calendar. Women had to prepare food for this day at least one day in advance, as no fires were allowed to be used on that specific day. People were also only allowed to eat cold food, and only cold food was allowed to be set up for the ancestral ritual. In the performance set on such a day, a mother sits in front of a cold furnace early in the morning and instructs her young daughter to watch and learn, to make sure the rice is cold enough before it gets packed up for the male family members to take it up to the tomb site for ancestral rituals. She tells her daughter that she also had a dream as a young girl, and imagines what her life would have been like outside the kitchen.

“Many women whom we interviewed talked about the amount of time they spent inside the kitchen, but also talk about little fun moments and memories they created with their daughters,” said Jung. “We also wanted to share that with the audience members.”

“Knotting the Time” will premiere on Oct. 7 and 8 at the Asia Culture Center. The center said it hopes to bring it to Seoul and tour it across the world in the near future, as such stories with traditional elements “transcend language barriers and touch the hearts of global audiences,” according to Jung.

Musical ‘Sweeney Todd’ is back and better than ever