[TREASURE] A pavilion with a style all its own

[TREASURE] A pavilion with a style all its own 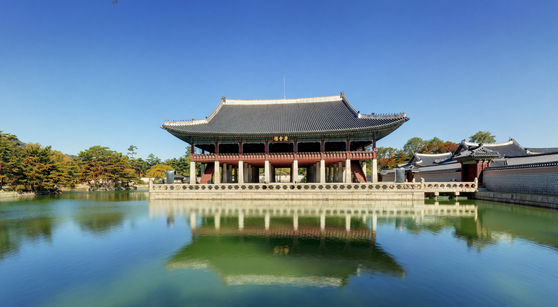 It was burnt down during the Japanese Invasion in 1592, leaving only the stone supports. It was rebuilt in 1867 along with Gyeongbok Palace. After building a square island with long and smooth stones, the pavilion was built on them. It was connected to the land by three stone bridges to the grand Gyeonghoeru Pavilion. Behind the pavilion, a hill called Amisan, made up of the soil dug up from the pond, was erected. Gyeonghoeru has seven rooms in the front and five on the side. It is a two-story, magnificent building.

During the reign of King Taejong, there were 48 stone pillars carved with wriggling dragons. Under the reconstruction, square pillars were erected outside, while circular pillars were erected inside. The first floor was covered with square stones, while the second floor had wooden floors. The height of the rooms varied so that officials could sit according to their respective positions. The roofs were made up of a set of decorative roof tiles over an angled rafter, which is the finest part of the palace.

As the largest elevated pavilion in Korea, the simple and yet splendidly designed pavilion is considered a valuable cultural asset, representing the style of the late Joseon Dynasty (1392-1910).

The photos and text for National Treasure are provided by the Cultural Heritage Administration. For more information, call (042) 481-4650 or visit www.cha.go.kr.