[VIDEO] Conte: ‘The referees have to understand the emotional moment’

[VIDEO] Conte: ‘The referees have to understand the emotional moment’


Tottenham Hotspur coach Antonio Conte discussed his sending off in the Champions League match against Sporting Lisbon during a press conference on Friday ahead of a game against Bournemouth on Saturday.

Spurs drew 1-1 with Sporting with an 80th minute Rodrigo Bentancur header tying the score after a Marcus Edwards goal in the 20th minute. Harry Kane slammed in a shot in the dying seconds of the game, but it was ruled offside after a long VAR check.

Conte was sent off in the aftermath of that decision.

Tottenham take on Bournemouth on the road at Vitality Stadium in Bournemouth, England at 3 p.m. on Saturday, or at 11 p.m. in Korea. 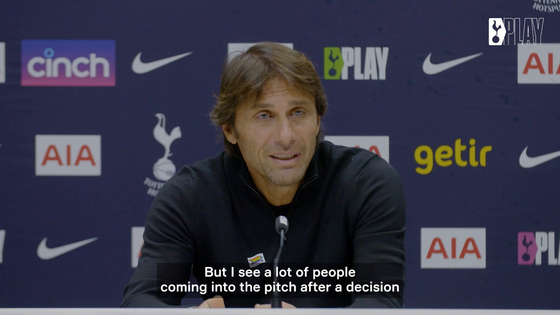 Conte: ″The referees have to understand the emotional moment″ [ONE FOOTBALL]