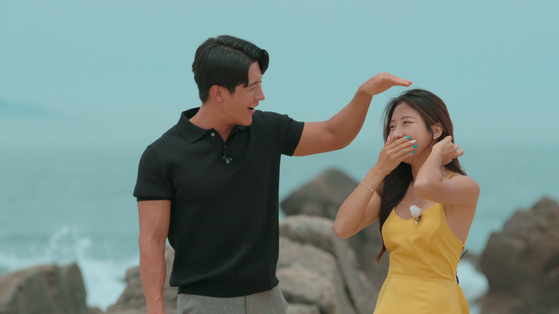 
Single, attractive, flirty and ready to find true love — on a deserted island with your every move broadcasted all over the world as you go on dates with multiple people over a span of a few days.


It may not be everyone’s cup of tea as far as their own participation is concerned, but that’s exactly what happened on Netflix’s global hit dating reality show “Single’s Inferno” (2021-22), which received a heated reaction from both viewers and critics when it ran from last December to January.

Picking up steam with the success of “Single’s Inferno,” Korean small screens have been pumping out dating reality shows featuring ordinary people who have never been on television before.

As the competition for viewers’ attention intensifies among these programs, shows are getting more bizarre and provocative by the day: swapping dates among four pairs of ex-couples; pitting eight gorgeous women against each other to win the heart of one man; and even going on dates literally chained to one another. 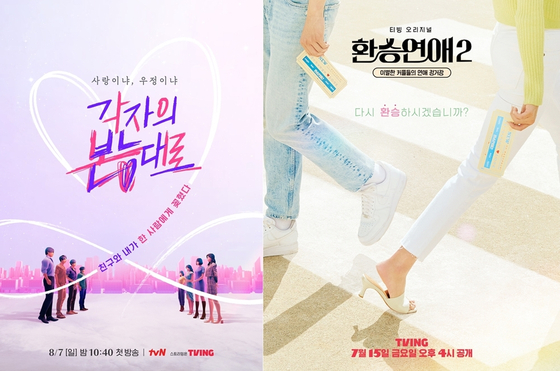 Posters for “EXchange 2” on Tving [TVING]


Some of the hottest Korean dating reality shows among the many are: “EXchange 2” on Tving, “I’m Solo” on ENA Play and SBS Plus, “Change Days 2” on Kakao TV and MBN’s “Love After Divorce 3″ that aired this year. After the release of each episode for any of these shows, the media and online communities are instantly flooded with discussions about the participants and various analyses of the possible meaning of their actions.

Over 20 dating reality shows have come out so far this year, with more still scheduled to come, including season 2 of “Single’s Inferno.”

Dating is always a topic of interest, and Korean broadcasters have been making dating shows for decades, but never before have there been so many similar dating shows dominating the small screen like the year 2022, especially those featuring non-celebrities.


Why do people watch dating shows to begin with?


One could say it stems from the fun of imagining oneself in the participants’ shoes, but with the safety of knowing that the struggles aren’t theirs to fight.

More people have come to crave the enjoyment of a love life, even if only vicariously, especially since Covid-19 has kept the dating demographic distanced and made meeting new people more difficult. Add to that the fact that viewers can passively observe any conflicts that arise from a third-person perspective, viewers feel they are left with a relatable, yet burden-free fantasy love life. 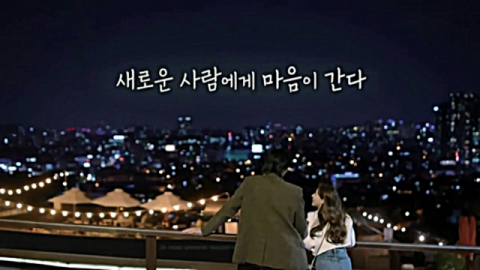 A scene from “EXchange 2,” which has four ex-couples swap dates while living under one roof [TVING]


“Sometimes I enjoy watching the shows imagining that I am one of the participants on the show,” said 26-year-old Jung Si-eun, who calls herself an avid viewer of “EXchange 2.” The show revolves around four ex-couples living under one roof who swap days spending time with one another’s exes.

“Strangely enough, though, I watched these dating programs with much more ease when I wasn’t dating, because then I was merely observing the participants as an outsider,” she said.

In fact, less people in Korea are dating and getting married.

According to the latest survey of 2,464 single men and women published by the Korea Institute for Health and Social Affairs in 2019, 74.2 percent of men and 64.3 percent of women reported that they are not dating. 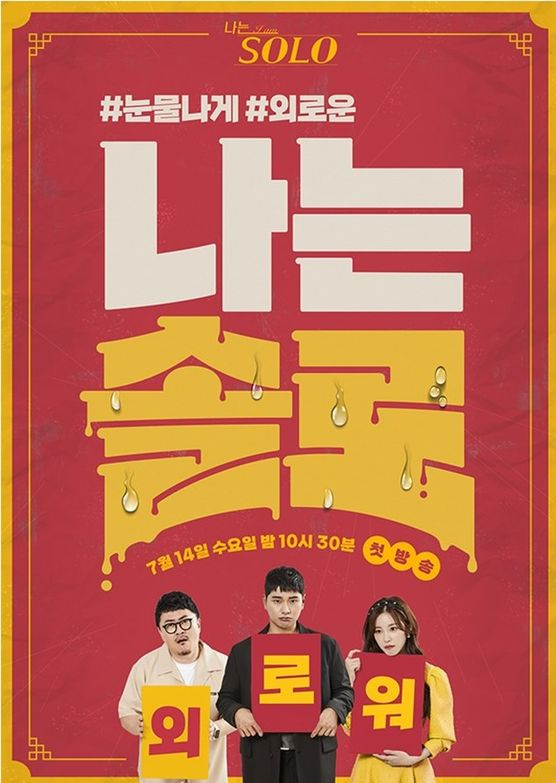 Poster for “Love After Divorce 3” on MBN [MBN]


“People are living vicariously through the shows, like how one would be active in a metaverse,” psychology professor Lim Myung-ho said.

“Fundamentally, the public interest toward sexuality has not diminished. But now, people can indirectly experience dating through watching the participants. I believe the shows are becoming more popular because they are offering more explicit stories and moments that act as a supplement for reality.”

The distance in watching from a third-person perspective is another important factor, according to culture critic Jeong Deok-hyun.

“There comes a certain sense of fatigue when you have to deal with your own relationship, whether it be from interacting with your significant other, or a complicated married relationship,” Jeong said. “So instead of real relationships, viewers turn to dating reality shows.”


Then why have they become so popular now as opposed to before?

The idea of dating shows has always been around, but the latest trend of featuring everyday, non-celebrity participants makes them much more relatable to the masses.

The former three programs showed celebrities flirting or making passes at each other with the ultimate purpose of matchmaking. When that began to get cliché, “We Got Married” came up with the idea of showing the lives of celebrity couples as newly-weds.

Giggling at attractive, flirtatious stars may have been fun for a while, but viewers started to want more raw feelings.

“The trend changed in favor of reality,” Jeong said. “People wanted to see real emotions, positive or negative — not scripted lines that the creators handed out. Reality shows became the new trend.” 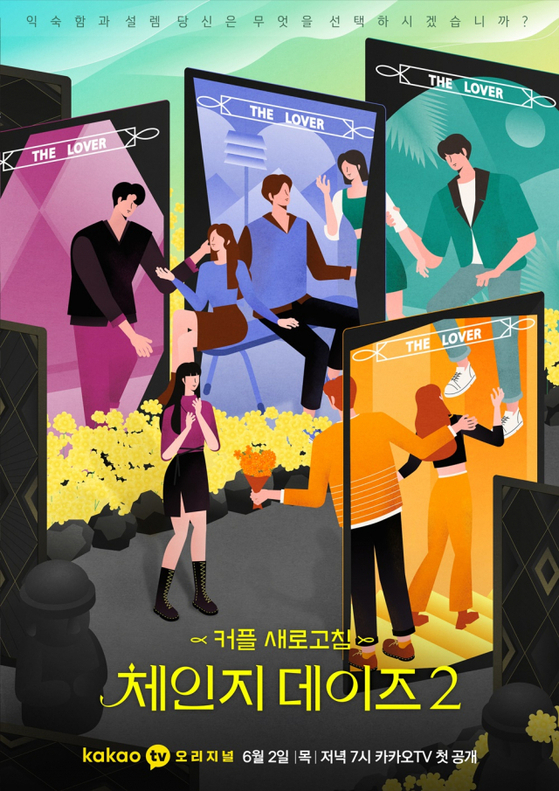 
“I am currently involved with someone, and I got the chance to look back on my relationship through watching couples fight on the show,” said 30-year-old Lee Beom-yeol, who watches “Change Days 2.”

The show gathers four couples on the verge of a break-up to go on a trip all together. On this trip, each couple agrees to put their relationship in the grey zone, allowing their significant other to go on dates with other people.

“And then I think about how I should resolve my relationship conflicts,” Lee said. “On the other hand, if I see them having a good time on dates, I take reference for my own dates.”

Another viewer of “EXchange 2” says she finds it interesting when she discovers similarities between the participants’ actions and her former relationships.

“I found it interesting that the show focused on following the participants’ chain of emotions,” Lim Yu-jung, a woman in her 30s, said.

“It also became an opportunity for me to look back on my past as well. Through their stories, I came to face the emotions that I once felt, and better understood my past counterparts. I think that’s why I became so engrossed in the show.”

“Previously, people watched variety shows to see how the celebrities would react or respond, but in today’s shows, people can relate to the participants because they are, as the viewers are, ordinary people,” Lim said. “This quality makes the show feel more real, which is why people assimilate to their actions or thoughts.”


Then why are the shows getting more unorthodox and peculiar?

The ultimate goal is to attract more viewers, but the means to do that is believed to be achieved by bringing out raw emotions under extreme circumstances.

Twenty-seven-year-old Choi Jung-eun, a self-professed avid viewer of “I’m Solo,” says that the very reason she favors the show is due to its candidness. “I’m Solo,” compared to other shows, takes on a relatively ordinary setting, inviting participants to live under one roof and go on various missions to earn dates or have their first pick at who they fancy.

“Compared to other shows, ‘I’m Solo’ is much more raw — the participants are ordinary people we’d see every day, and they don’t care about their image in front of the camera and act according to how they feel,” Choi said.

“It’s fun to watch them because the show recruits a variety of people with different lifestyles and beliefs, and sometimes I find similarities between myself and them, in terms of their actions or even their ways of speaking.” 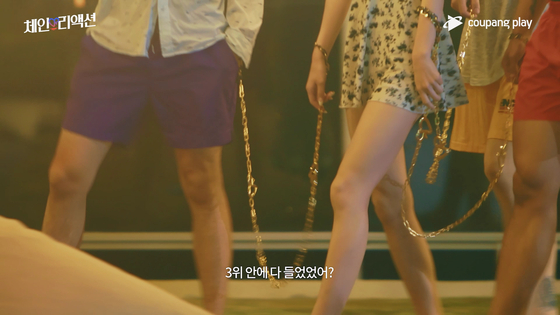 A scene from “Chain Reaction,” where participants are chained to one another when going on dates [COUPANG PLAY]


Show creators defend that extreme settings as part of the package deal to keep the show “real.”

In “Chain Reaction,” now airing on Coupang Play, the show takes eight hopefuls looking for love and literally chains them together on the island of Saipan.

“When one hears that chains are used in a dating show, it can create a certain idea of sexy, and it gets people excited,” said the show’s writer Cho Mi-sun as she explained its motif at a local press event on Sept. 14.

“However, it was an important medium to make two people become closer. The chains physically close the distance between two people. As they mingle, their inherent manners or regard for the other person can conjure up feelings that they haven’t had before.”


What makes particular shows stand out?

In an attempt to make viewers curious, shows are now changing not only the rules of how people meet, but also the types of people they bring on their programs.

From shows that feature only divorcees to Korea’s first-ever queer dating show, these programs are opening new doors in the quietest of society’s corners to bring out never-before-seen topics. 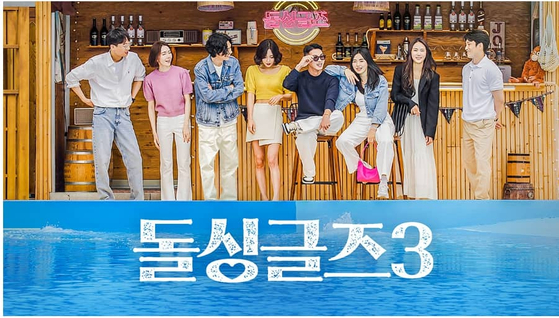 Poster for “Love After Divorce 3” on MBN [MBN]


In “Love After Divorce 3,” which wrapped up on Sept. 11, the show recruited divorcees looking to take a leap of faith to find their true love, in an attempt to shatter the negative connotations around the idea of and people involved in divorce.

Despite the prejudice against divorcees in Korea, the show’s first season received positive praise, leading to the production of two additional seasons.

“I’m so heartbroken,” one viewer wrote on Twitter in response to the season’s finale. “I totally understand what she’s going through and it’s so sad.”

Another recent arrival to the dating reality show category covers sexual minorities, the first-ever to highlight the local LGBTQ community.

Two dating shows produced by local streaming platform Wavve went viral during the summer: “Merry Queer” revolved around three queer couples and the challenges they face in love and marriage, while “His Man” featured eight homosexual men looking for love. 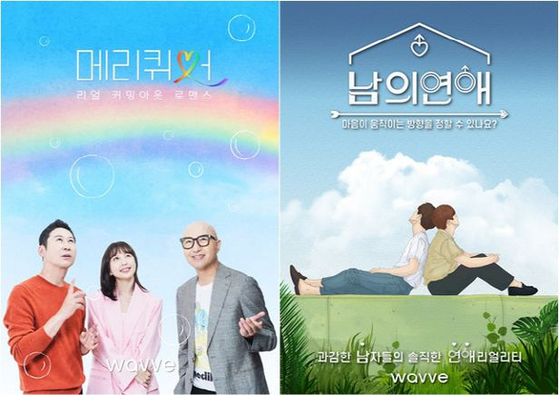 
Since producers are always looking for fresh content inspiration, shows revolving around once-taboo subjects is likely to proliferate. In fact, homosexuality has already become its own genre in Korea, under the name “boy’s love,” or BL, according to culture critic Kim Heon-sik.

“The entertainment industry, including web novels, webtoons and streaming platforms, view the BL genre as a lucrative one,” Kim said.

“Although people may not frequently encounter dating among sexual minorities in reality, it’s already a familiar concept in content. Because it is simultaneously familiar and foreign to the audience, I believe producers will create more shows like this in the future.”

Food and theater come together at events across Seoul

Food and theater come together at events across Seoul